Did Keith M. Alber Write, 'Opinion From a Former Judge'?

Among the purported steps to overturn democracy were "divide the nation philosophically" and "control all media." 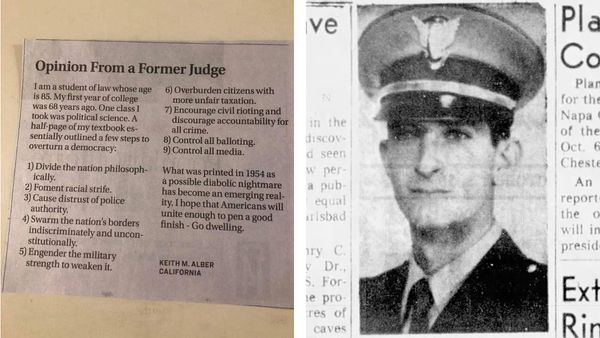 Keith M Alber wrote an opinion from a former judge which began with the words I am a student of law whose age is 85. (Image Via Facebook and The Napa Register (1959))

Claim:
A former California judge named Keith M. Alber wrote a letter to a newspaper, titled "Opinion From a Former Judge," that lists nine steps on how to overturn a democracy.
Rating:

A former California judge named Keith M. Alber truly wrote a letter that appeared in a newspaper under the title "Opinion From a Former Judge" and spread across Facebook since at least December 2021. We confirmed the letter's authenticity by speaking with Alber over the phone.

One of the more popular postings of the article came from a Facebook account named Chad Jones. As of mid-May 2022, that post had been shared more than 11,000 times:

The letter read as follows:

Opinion From a Former Judge

I am a student of law whose age is 85. My first year of college was 68 years ago. One class I took was political science. A half-page of my textbook essentially outlined a few steps to overturn a democracy.

What was printed in 1954 as a possible diabolic nightmare has become an emerging reality. I hope that Americans will unite enough to pen a good finish - Go dwelling.

The Origins of the Newspaper Article

Initially, when looking for the origins of Alber's "Opinion From a Former Judge," we came up empty. As far as we could tell, a syndicated columnist named Ronald Hart once reprinted the letter in December 2021, but the trail seemed to end there.

However, after some additional research, we made contact with Alber over the phone.

Alber said he wrote the letter in October 2021 and sent it to The Epoch Times newspaper. (The letter in the photo that circulated on social media was believed to have come from that print publication.) The Epoch Times has a history of promoting far-right political rhetoric and conspiracy theories.

He told us he couldn't remember the name of the college textbook he referenced, though he recalled having the book in 1954 when he attended "Napa College," or what is now called Napa Valley College.

We asked Alber if he had anything to add regarding his letter, "Opinion From a Former Judge." He shared the following:

At the time I read [the steps to overturn a democracy] back in 1954, I thought, 'That could never happen. That would be a nightmare.' And it would be disastrous for this country if that ever did happen. Years later, when it was happening, the attempt to achieve those goals was a reality. I became very alarmed. I have pretty much dedicated my life to the justice system and laws. I was a bench officer for 25 years in the Superior Court, and I've been interviewed by many news people. I don't know, I just feel [the current state of the country is] a very sad comment on the public being so dumb.

On the subject of politics, Alber told us, "I don't have any comment about politics. It's not my specialty. And, so I don't say anything about it."

"I'm like Voltaire," he added. "I may not agree with what you say, but I will defend your right to say it."

In sum, yes, Alber wrote the virally shared article that was titled, "Opinion from a Former Judge," and listed nine steps on how to overturn a democracy. This story will be updated if we receive any additional information about the textbook to which he referred in his letter.