We analyzed videos frame by frame to discern what exactly happened after a Columbus cop fatally shot the 16-year-old. 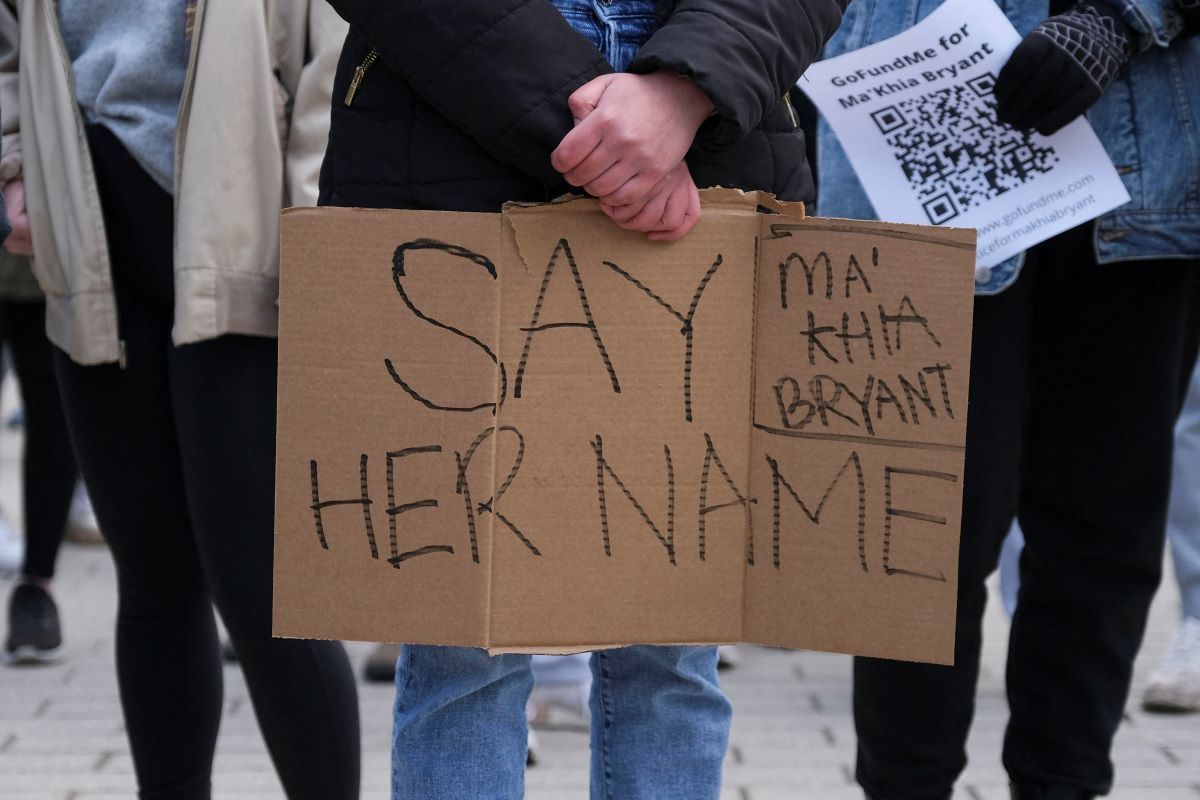 One reputable news outlet reported that a police officer at the scene of Bryant's death donned a "blue lives matter" face mask, and a bystander's Facebook Live video recorded someone using the phrase, but it was unclear who said it. The video also recorded a group of Black residents upset that they had purportedly heard it come from at least one officer.

On April 20, 2021, around the same time a jury in Minneapolis convicted former police officer Derek Chauvin of murdering George Floyd, a Black man, a 16-year-old Black girl named Ma'Khia Bryant was fatally shot by a police officer in Columbus, Ohio.

As news of her death spread on social media, rumors surfaced claiming police officers at the scene said "blue lives matter" to people who were standing around moments after the shooting. The slogan is considered a pro-law enforcement countermovement to Black Lives Matter, the modern-day civil rights movement attempting to call attention to police brutality's disproportionate effect on non-white people.

For instance, Twitter user @_WhatRiot tweeted a 13-second video and claimed it showed three white officers saying the phrase to Black residents standing at the scene of Bryant's death. "They just k*lled a black child and they are yelling Blue Lives Matter to the black people that just witnessed it," another person tweeted.

Let us note at the offset: We attempted to reach the Columbus Division of Police for its response to the underlying accusation -- that its officers told a group of people "blue lives matter" at the scene where one of them shot and killed a Black teenager -- but the voicemail box for the agency's spokesperson was full and not taking any messages. We will update this report when, or if, we are able to reach the law enforcement agency.

But, before we examine the legitimacy of that assertion, we'll lay out the facts of the teenager's death -- a killing police-reform advocates framed as yet another example of white police officers' eagerness to use deadly force against Black suspects, no matter the circumstances.

What Happened at the Scene of Ma’Khia Bryant's Killing?

At a news conference hours after the shooting, officials with the Columbus Division of Police released edited footage from the body-worn camera on the police officer who shot and killed Bryant. Snopes obtained a video recording of that media event via WKYC, Cleveland's NBC-affiliated news station.

The body-cam video began with an officer later identified as Nicholas Reardon, a one-year veteran with the department, getting out of his squad car on a residential block in east Columbus' Walnut Heights neighborhood, according to Interim Police Chief Michael Woods.

There, Woods said police were responding to a 911 disturbance call from someone who said girls or women were "trying to stab" and "put their hands on" others.

The interim chief said dispatchers asked about possible weapons involved, but weren't able to gather that information. (Recordings of the 911 call released the following day and reviewed by Snopes corroborated that statement -- the caller did not answer the dispatchers' questions regarding possible weapons.)

Based on Reardon's body-worn camera footage, he took a few steps toward a handful of people in a driveway -- their faces were blurred out to protect their privacy. No further details on those witnesses, such as their identities, ages, or why they were at the house, were immediately known. At that point, the camera recorded Bryant swinging a knife at an unidentified girl or woman, who fell backward onto the ground, and then running at another girl or woman, who was pinned against a vehicle. Meanwhile, the officer shouted "Get down!" and drew his handgun, while another person kicked the girl or woman on the ground.

About one second passed before Reardon fired four shots, and the video showed Bryant fall to the ground. A blade that appeared to resemble a kitchen knife or steak knife lay on the sidewalk, and at least two other police officers (we'll call them "backup officers" for the purposes of this report) arrived and approached the 16-year-old sprawled out in the driveway.

The footage captured the below-transcribed audio, along with other indiscernible shouts and screams from witnesses. Aside from Reardon's audio, it was unclear who shouted what.

Reardon: She had a knife. She just went at her.

Bystander: She's a fucking kid, man! Are you stupid?

Reardon to backup officers: What do you need to me to do?

Bystander: Why'd you shoot her?

Reardon: She came at her with a knife.

No audio from Reardon's body-worn camera appeared to record him or the backup officers saying "blue lives matter."

The next day, Columbus law enforcement leaders held another media briefing on the incident, a recording of which Snopes obtained via the city of Columbus' YouTube channel. They played the 911 calls that drew police to the house, identified the officers including Reardon, and played footage from the backup officers' body-worn cameras.

Those devices recorded one of the backup officers performing chest comprehensions on Bryant, who was seemingly unresponsive with a pool of blood underneath her. Medics eventually took her to a hospital, where she was pronounced dead, according to authorities.

Those videos also did not record anyone saying "blue lives matter."

Now, let us examine what we know about the video in @_WhatRiot 's tweet and the underlying claim.

That footage showed several unidentified police officers standing behind yellow crime-scene tape near a sidewalk and a handful of people standing on the opposite side of the police line on a nearby lawn. The officers' races were unknown, and several bystanders were Black.

Someone in that group yelled, "Blue lives matter -- that's crazy -- that's an insult, especially at this place right now."

Then, another person, who appeared to be taking the video, said: "Yeah, that's definitely an insult. You sound stupid as fuck, bitch."

In other words, the tweet's video purportedly showed a group of Black people's response to officers saying "blue lives matter" moments after Bryant's death, but it did not record cops' statements that supposedly prompted the crowd's reaction.

Upon further investigation, Snopes found the origin of the short clip: a Facebook Live video from someone who witnessed Bryant's shooting and walked around the scene capturing witnesses' reactions and officers' response. Around the 9-minute mark, someone off-screen yelled "blue lives matter," though it was unclear who.

About a minute later, the narrator asked those around her if an officer indeed used the phrase. "He said blue lives matter, he just said that? Boy, shut the fuck up because blue lives don't matter right now," the narrator said. "I didn't hear him say it loud enough -- I, see, probably would've gone up and spit on him."

The Washington Post reported one officer at the scene indeed wore a "blue lives matter" face mask, which one bystander, neighbor Ira Graham III, found insensitive. Graham told that news outlet he had just come home from work when he heard the gunshots and saw Bryant on the ground.

In sum, without visual or audio evidence to substantiate the claim, we rate it "Unproven" with the significant caveat that a reputable news outlet reported at least one police officer at the scene of Bryant's death donned a "blue lives matter" mask and a bystander's video captured people upset by the sentiment.

Ohio's Bureau of Criminal Investigation (BCI), an agency independent of the police department, was collecting evidence to determine whether Reardon's decision to open fire was legal or appropriate under terms outlined in Columbus police policies, city statutes, and state laws, as of the original publication of this report. Pending the outcome of that effort, Woods said the police department would launch its own administrative review.

Columbus Mayor Andrew Ginther urged viewers of the body-cam video to "remain calm" throughout the duration of the BCI's investigation.

"Did Ma'Khia Bryant need to die yesterday?" he told reporters on April 21. "This is a failure, on part, of our community -- some are guilty but all of us are responsible."