Did the Obamas Wear Che Guevara Shirts During a Cuban Trip?

A poorly edited image supposedly showing the Obama family wearing Che Guevara shirts in Cuba has been shared tens of thousands of times on social media. 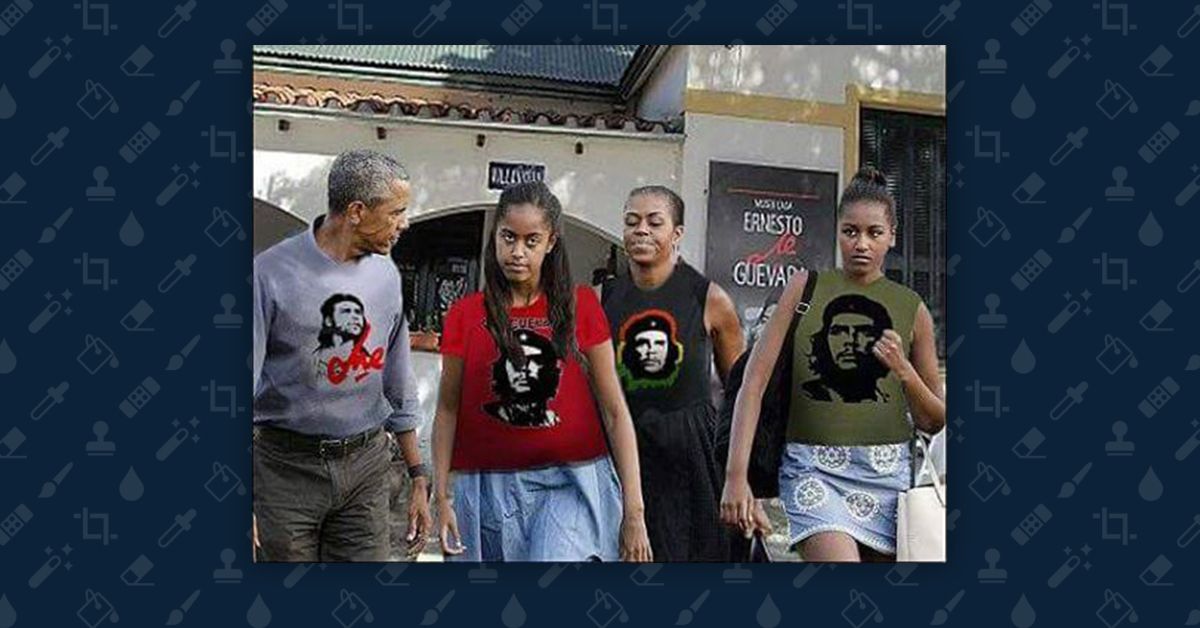 Here’s Obama and his family wearing the shirts of a thug and murderer in a Communist country. Where was the media and Democrats outrage then? They actually praised this!

Despite the obviously poor digital editing job used to create this image, a Facebook post featuring it racked up more than 20,000 shares within two days of its initial July 2018 posting. But this same photograph had been online since at least April 2016, when it was posted (on April Fool's Day, no less) by a junk news web site called Article 107 News as part of an article claiming that the Obamas had returned from their trip to Cuba with several Che Guevara souvenirs:

The First Family downplayed their selection of Cuba souvenirs, saying that the bulk purchase of Che t-shirts was “no big deal.”

“We wanted to get a taste for the local culture,” the First Lady explained through her personal press secretary, Nancy Kerrigan. “Every shop we went to had the same thing: coconut rum, prayer candles, and Che Guevara t-shirts. So we bought the thing that would be the least offensive to our political base, and decided to get matching Che Guevara t-shirts for the entire family. I don’t see what the big deal is.”

Hillary Clinton’s political campaign reportedly placed an order yesterday for 100,000 Che t-shirts in what her campaign describes as “having nothing to do with” the President’s trip to Cuba.

This report was as fake as the photograph is. Article 107 News is a "satire" website, and not only do they carry the slogan "The Facts Before they Happen" at the top of their page, they also state in a disclaimer that "you shouldn’t believe anything we publish is real":

Article 107 News is a satire site, and you shouldn’t believe anything we publish is real. You should, however, mercilessly mock everyone who does. If you’re looking for real news, check out our sister site The Havok Journal.

It’s pretty amazing what people will unquestioningly believe when they see it on the Internet, especially if it’s about someone they don’t like…

This was hardly the first time that President Obama had been dressed in controversial clothing thanks to the work of photo editing. In March 2015, shortly after President Obama's historic trip to Cuba, another doctored image purportedly showing the president holding a Che Guevara shirt was shared by Texas politician Sid Miller. Fake photographs depicting the president in a "pimp" outfit and an Aleister Crowley shirt have also been shared online.