Does a Photograph Show Obama Wearing an Aleister Crowley T-Shirt? 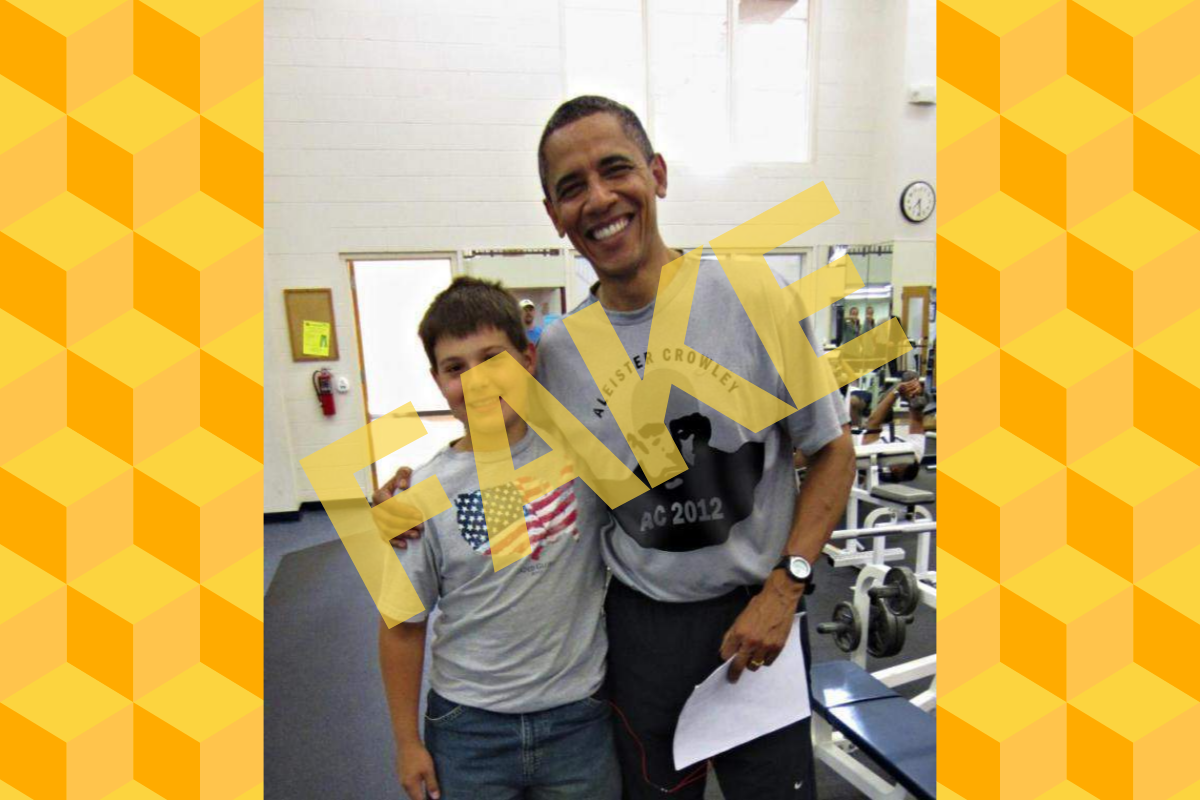 In September 2015 a several-year-old image of President Obama wearing a shirt bearing the name and image of English occultist Aleister Crowley began recirculating online, thanks to web sites such as The Gateway Pundit:

Barack Obama was recently seen sporting an Aleistar Crowley T-shirt during a trip to the gym.

Aleistar Crowley, who died in 1947, gained widespread notoriety during his lifetime, being a recreational drug experimenter, bisexual and an individualist social critic. As a result, he was denounced in the popular press as “the wickedest man in the world” and erroneously labelled a Satanist. Crowley used anti-Semitic slurs and had mixed feelings for the Jews.

So we now have a president who openly promotes the occult — a defining moment for America.

This image has been steadily circulating online since it was first posted on April Fool's Day 2012 by ac2012.com, a web site that sells Crowley merchandise, with the following message:

We would like to take a moment to thank Barack Obama for helping to raise awareness about Aleister Crowley in the lead-up to the 2012 election.

This image, however, is a fake.

The photograph on which this image was based was taken during a visit by President Obama to Team Rehab, a physical therapy clinic and wellness center in Decorah, Iowa, in August 2011. The photograph snapped there was posted to the web site USSKirk.com by student Michael Foster:

Instantly after walking in the door, I saw him. The President of the United States, was in our gym. Yes, our gym, in the small Iowa town of Decorah. I almost fainted from excitement. When the altered image of President Obama wearing an Aleister Crowley shirt initially began circulating in 2012, some viewers aseerted that it was Michael Foster's original image that had been doctored to remove the Crowley symbol from the President's shirt. That was not the case, of course, as documented by a story published on 16 August 2011 on Decorah News about Obama's visit to Team Rehab which featured another photograph of the President wearing the same plain grey shirt: