Did NRA Leader Wayne LaPierre Receive a Draft Deferment for a 'Nervous Disorder'?

A years-old Internet rumor suggests the gun rights figurehead may not be mentally sound enough to pass a background check. 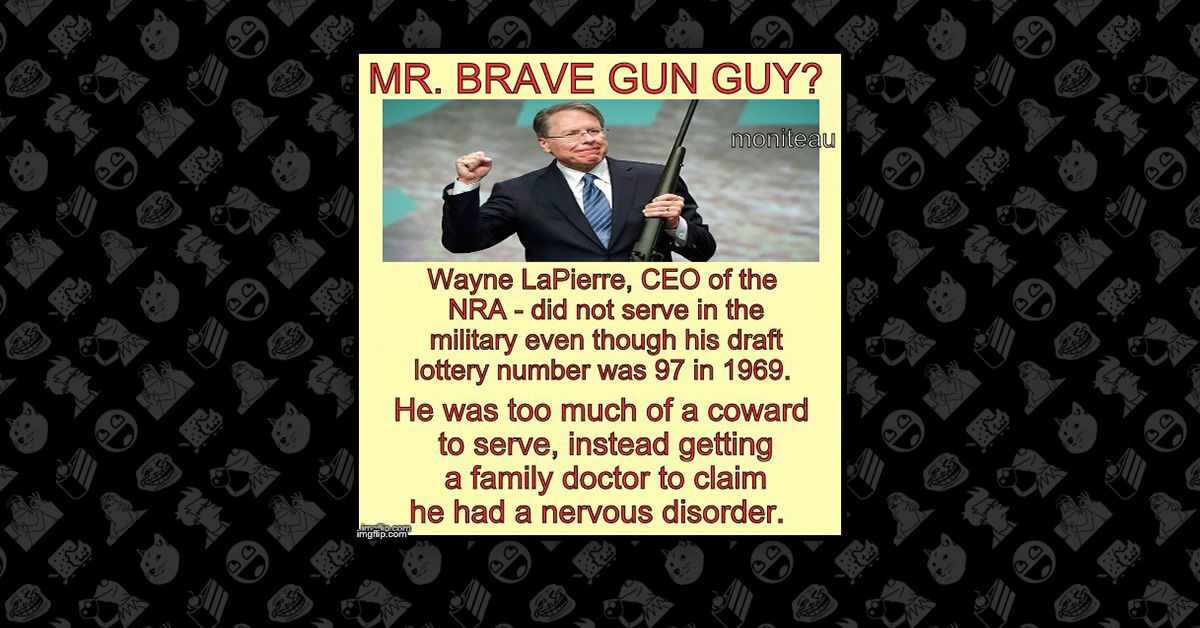 Claim:
NRA executive vice president Wayne LaPierre was disqualified from the draft due to a psychological condition.
Rating:

It was originally organized in 1871 to "promote and encourage rifle shooting on a scientific basis" in the United States, and it seems to have succeeded; generations later, the National Rifle Association has become the United States' most high-profile gun rights lobbying group.

The organization's executive vice president and CEO is Wayne R. LaPierre, an outspoken defender of the Second Amendment and critic of all but the most minimal gun control policies.

In the wake of the Sandy Hook Elementary School shooting in 2012 which resulted in the deaths of more than two dozen children and adults, LaPierre famously suggested that a "national database of lunatics" would do more to solve the nation's gun violence problem than banning the assault-style weapons so often used in such crimes.

LaPierre's repeated assertions linking gun violence with mental illness (assertions vigorously challenged by mental health professionals) appear to have backfired on him, at least on the Internet, supplying fodder for rumors and memes promoting the claim that he obtained a medical (4-F) draft deferment during the Vietnam War by reason of a "nervous disorder." Most variants state or imply that he actually faked the condition:

Wayne LaPierre faked a "nervous disorder" to squirrel out of serving his country in Vietnam. Coward with a gun. Great combo #NRAFail

NRA Lapierre dodged Vietnam draft by claiming "nervous disorder". Due to this mental illness, it's time to give his guns back #gunsense :

Although we were unable to ascertain precisely when or where this claim first appeared, it dates back at least as far as 2006, when the following entry was added to an informal online database called "Who Served in the Military?":

Wayne LaPierre, CEO of the National Rifle Association — did not serve (apparently pulled lottery #97 in 1969 as a campus radical at SUNY-Albany, but weaseled out by getting a family doctor to claim he had a nervous disorder).

No sources were cited to corroborate this entry.

According to the registrar's office of the State University of New York in Albany, Wayne LaPierre never attended the school. On the contrary, after graduating from Patrick Henry High School in Roanoke, Virginia in 1967, LaPierre entered Siena College in Loudonville, New York, from which (according to a statement from the college) he graduated in 1972. He went on to earn a postgraduate degree at Boston College.

Given his birthdate (8 November 1949), LaPierre would indeed have been assigned the number 97 in the first-ever Selective Service lottery of the Vietnam era, placing him in the “most likely to be drafted” category for 1970. However, we've found no public record or published mention of LaPierre ever having served in the military. Our queries to the NRA public affairs office concerning Mr. LaPierre’s military service and/or draft deferment status went unanswered.

We were able to obtain Wayne LaPierre's Selective Service record from the National Personnel Records Center in St. Louis, however. It shows that he registered for the draft on 13 November 1967, a few days after his 18th birthday, listing his occupation as "student." Under the rules then in force, a registrant could qualify for a student deferment "if he could show he was a full-time student making satisfactory progress in virtually any field of study,” the Selective Service web site says. LaPierre's Selective Service classification record shows that he was classified 2-S (registrant deferred because of activity in study) in January 1968. His student deferment was renewed every year through 1970.

Although the student deferment should have kept him immune from the draft until he graduated in 1972, the record states that LaPierre reported for an armed services physical exam in August 1971 (while still at Siena College), and shortly thereafter was reclassified 1-Y (registrant qualified for service only in time of war or national emergency).

During the Vietnam War period, receiving a 1-Y classification was essentially the same as being classified 4-F (registrant not qualified for military service). The 1-Y deferment was eliminated at the end of 1971, at which time all registrants who had previously received it, LaPierre among them, were administratively reclassified 4-F.

Like that of Donald Trump, who also received a 1-Y draft deferment, LaPierre's classification record includes the notation "yxx," meaning he was found unqualified for military service based on medical reasons. However, it does not state the exact nature of the disqualifying condition(s).

We can confirm, then, that in NRA executive president Wayne LaPierre received a medical deferment from the draft in 1971, but to date no evidence has come to light proving it was because of a "nervous disorder" (feigned or real), or any other psychological condition.

Lexington.  "Why the NRA Keeps Talking About Mental Illness, Rather Than Guns."   The Economist.  13 March 2013.

Updated [26 February 2018]: Added information provided by the registrar at SUNY-Albany.