Was National Guard Deployed in Minneapolis After Police Shooting of Daunte Wright?

Already, hundreds of officers were standing guard in the city due to the trial of Derek Chauvin, the former cop charged in George Floyd's death. 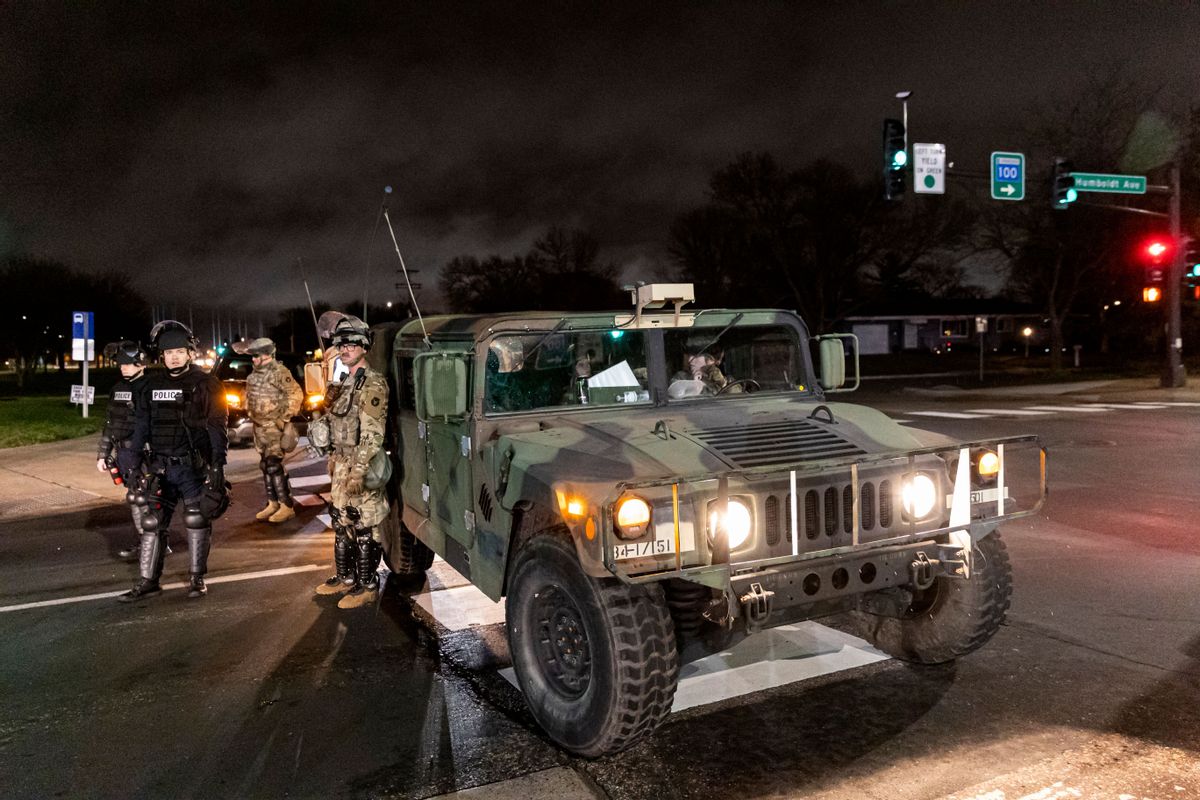 Claim:
Minnesota officials deployed the state's National Guard in response to protests against the death of 20-year-old Daunte Wright on April 11, 2021.
Rating:

Hundreds of National Guard members were already patrolling the metro area due to the trial of Derek Chauvin, the former Minneapolis police officer who's charged in George Floyd's death.

On April 11, 2021, a 20-year-old Black man named Daunte Wright died after being shot by police during a traffic stop in a Minneapolis suburb. Soon afterwards, reports surfaced claiming Minnesota officials deployed the state's National Guard to provide law enforcement across the metro area as people protested what they considered another senseless killing by police. The posts were factual.

Just before midnight on April 11, reporters from The Star Tribune saw National Guard troops begin patrolling the area of Wright's death in Brooklyn Center, a city of about 30,000 residents on Minneapolis' northwest border. Crowds of protesters had gathered there to stand in solidarity with the 20-year-old's family and call attention to systemic racism in policing.

About an hour after that, the head of the state's department of public safety, Commissioner John Harrington, confirmed that officials had deployed National Guard officers to handle the protests that had evolved into chaotic clashes with police officers using tear gas, flash bangs, and rubber bullets

The crowds included or attracted people who stole from nearby businesses, vandalized property, jumped atop squad cars, and threw rocks and other objects at police officers, according to news reports, as well as photographic evidence. Harrington reported about 20 businesses were broken into at a Brooklyn Center shopping center, and The Star Tribune reported "widespread" looting in north and south Minneapolis.

But let this be clear: Law enforcement plans — including the Minnesota National Guard — were already underway. Weeks before Wright's death, Gov. Tim Walz had issued an executive order deploying guardsmen to patrol Minneapolis during the trial of Derek Chauvin, a former Minneapolis police officer charged in George Floyd's death.

“As Governor, I will always defend the right to protest,” he said in a statement explaining the order. “It is how we express pain, process tragedy, and create change. That is why I am answering our local leaders’ request for Minnesota National Guard assistance to protect peaceful demonstrators, neighbors, and small businesses in Minnesota.”

As of the morning of April 12, law-enforcement leaders reported more than 500 National Guard officers stood guard throughout the metro as a result of that decision (not protests against Wright's death), and that they planned to "increase that number in the coming days," as prosecutors concluded their arguments to charge Chauvin.

At the same time, the Minnesota National Guard posted from its official Twitter account: "We are in the process of expediting those plans to bring additional Guardsmen on duty in response to the events overnight in Brooklyn Center."

As of this writing, National Guard troops and law enforcement officers were guarding Brooklyn Center police headquarters, among other areas across the metro. State leaders had issued a 7 p.m. curfew for all Twin Cities residents.