No, the NAACP Didn't Warn About Violent White Supremacist Initiations 'This Weekend' 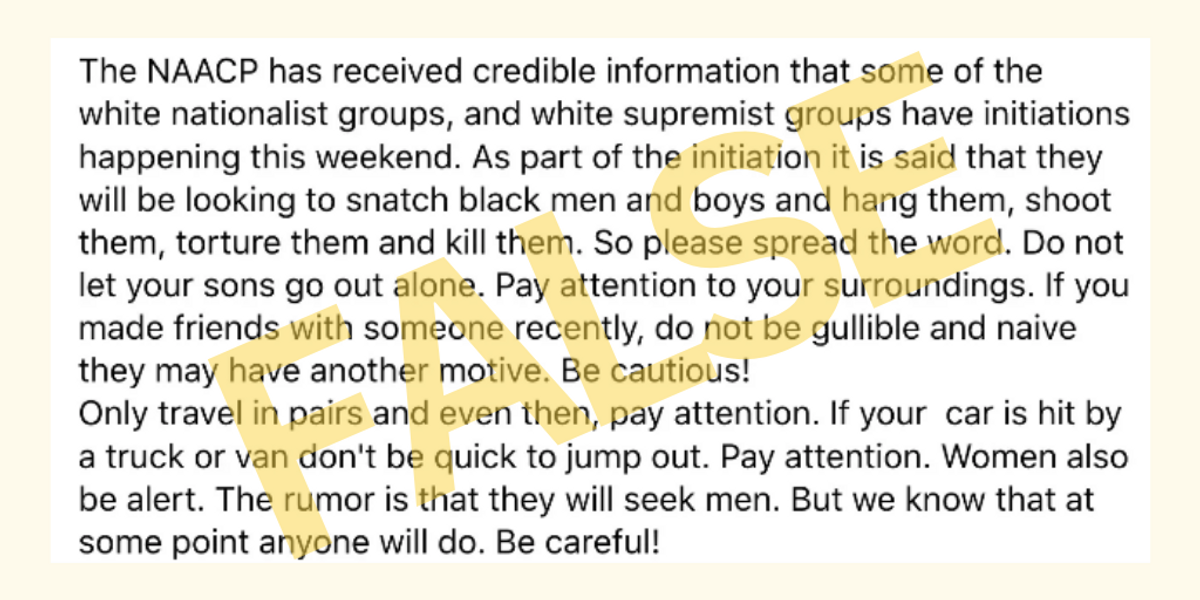 In early July 2020, Facebook users shared a frightening message that reportedly originated from the National Association for the Advancement of Colored People (NAACP) issuing a warning about violent initiations "this weekend" from white supremacist groups. A screenshot of the message being circulated on Facebook is displayed above, with the name of the user who posted it cropped out for privacy purposes.

The NAACP released a statement on July 4, 2020, confirming that they issued no such warning. The statement reads, in part:

In recent days, several social media platforms have posted statements purporting that the NAACP has received information about white nationalists groups initiations during the July 4 weekend.

The National NAACP has not released any such statement. While we take all matters of racial discrimination and racial hatred seriously, these statements are not from the NAACP.

The statement goes on to say the post appears to have originated with a group that is not affiliated with the NAACP.

The warning appears to be a case of "copypasta," a type of internet hoax defined by Dictionary.com as "a block of text which is repeatedly copied and pasted by individuals over various online forums and social media sites. It is often used interchangeably with 'copy and paste.'"

It's notable that the warning pertains vaguely to "this weekend," but doesn't include dates or locations for the alleged threat of violence.

The specter of deadly, racist violence was visceral at the time the copypasta hoax spread. In the spring of 2020, nationwide racial justice protests occurred in the wake of killings of Black Americans, sparking outrage and discussions over structural racism.

The hoax also circulated around the same time there were multiple news reports of Black men found hanging from trees. Even as police said there was no evidence of foul play in these cases, the deaths recalled a racist and violent history of lynchings in the U.S.

Because this warning was debunked by its alleged source, the NAACP, and appears to be a copypasta hoax, we rate this claim "False."

Patton, Stacey. "Police Say Deaths of Black People By Hanging Are Suicides. Many Black People Aren't So Sure."   The Washington Post. 22 June 2020.