No, the US Military Didn't Hang Tom Vilsack 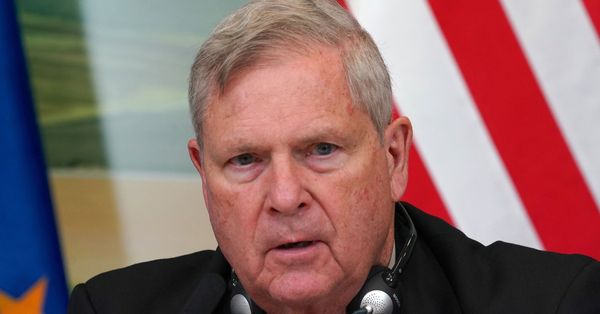 Claim:
U.S. Secretary of Agriculture Tom Vilsack was hanged by the military for treason.
Rating:

On May 22, 2022, the website Real Raw News published an article asserting that U.S. Secretary of Agriculture Tom Vilsack had been hanged by the military for treason:

Biden’s former secretary of agriculture, Tom Vilsack, met his demise last Monday when the Office of Military Commissions hanged him to death for having committed treason against the United States of America.

As is typical for Guantanamo Bay executions, Vice Adm. Darse E. Crandall and a cadre of White Hat brass were present to oversee the execution of a man who had become an expendable pawn on the Deep State’s chess board.

There is no truth to these assertions, just as there was no truth to a previous story on the same website claiming that Vilsack had been arrested by the military for deliberately destroying agriculture food processing facilities in order to create a food shortage.

Although its content might be best described as monotonously recycled conspiracy theories, Real Raw News carries a disclaimer characterizing its output as "humor, parody, and satire":

Disclaimer:
Information on this website is for informational and educational and entertainment purposes. This website contains humor, parody, and satire. We have included this disclaimer for our protection, on the advice on legal counsel.

For the record, on the date that Vilsack was supposedly "hanged" by the military, he was actually in Europe, where he met with government officials and held at least one news conference.