Are Fires at Food Processing Plants a 'New Trend'?

The real trend here is an uptick in fear-mongering over food-supply shortages. 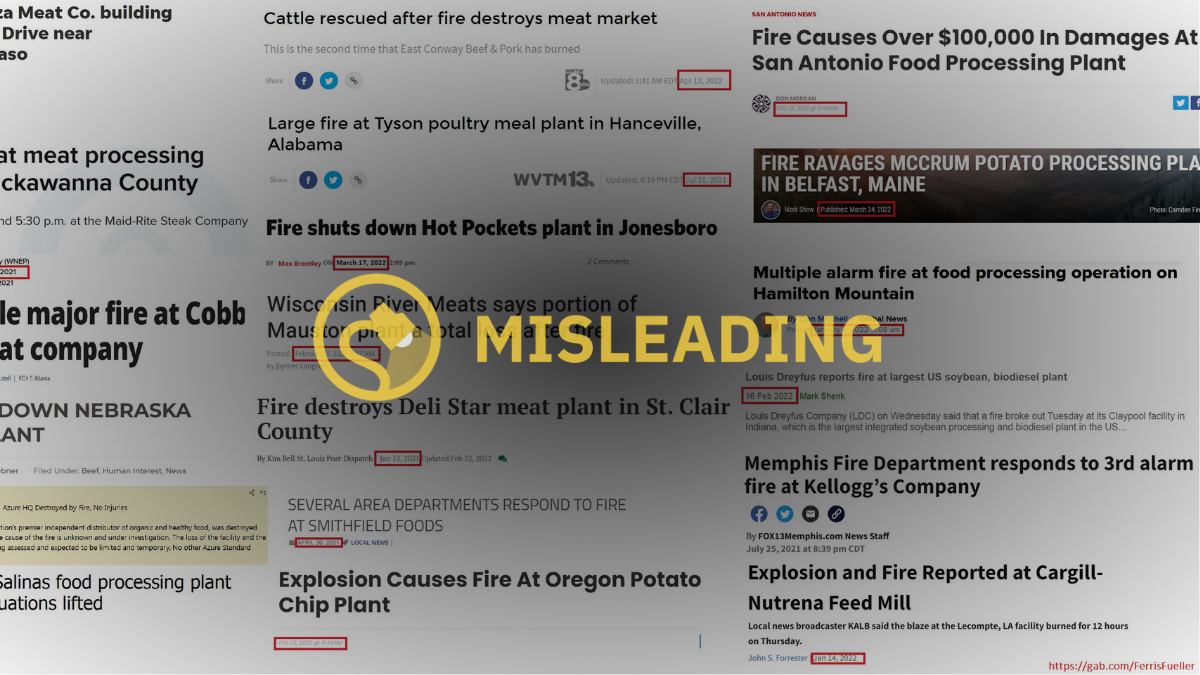 Claim:
An abnormal number of fires have occurred at food processing plants in 2022.
Rating:

The claim of a new "trend" of fires at food processing facilities does not hold up upon scrutiny. Almost all of the fires on meme lists involved explainable causes, and we found no examples of suspected arson. One of the included examples involved an abandoned building, while another involved a butcher shop (not a large food processing facility). Most importantly, this "trend" is not new. When we searched for news stories about fires at food processing plants in 2021, 2020, and 2019, we found that such fires are relatively commonplace, and that there has not been any conspiracy-worthy upticks.

In April 2022, a number of people spread the spurious claim that there had been a recent spate of fires at food processing facilities across the United States. This claim was used by some to push the notion that nefarious forces were attacking these facilities in order to create a food shortage. When we examined this rumor, however, it quickly fell apart upon scrutiny.

How Many Such Fires Have Occurred in 2022?

Like many similar rumors that stretch (or ignore) the truth, there isn't one single claim to examine. The most common and repeated claim is that these fires are a new "trend." While the "trend" claim isn't very specific, social media users have attempted to enumerate the number of recent food processing fires. One such list included 20 news articles, while another list included 18. A popular image collected various headlines related to fires at food processing plants, while a recent web article claimed there had been "at least 16 such disasters" in the last six months.

When all of these headlines are gathered together in one place, it's easy to conclude this is a "trend." But upon closer inspection, these fires don't appear all that unusual.

We looked at all of the articles included in these lists and found that some don't even support the claim of an uptick in fires at food processing facilities. For example, the very first item shown in the above-displayed image involved a building that had been abandoned for years, not an active food processing facility.

"The problem is, there is people that don't have respect. Homeless people, all kinds of people go inside," Pascal Medrano Esparza, who has lived in the neighborhood since 1987, said. "It's dirty, it's messy, people defecate in there, like if they were in their own home."

Esparza said the building has been abandoned for several years.

Additionally, the top article in the center column ("Cattle rescued after fire destroys meat market") refers to a fire at a butcher shop, not a large food processing facility.

While many of these articles refer to real fires at real food processing facilities, we weren't able to find a single instance in which authorities suspected arson. The news article about a fire at a "meat processing facility in Lackawanna County," for example, was "ruled an accident" by authorities.

Furthermore, in many of the above-listed examples, these facilities were able to maintain their production schedules. The news article about the fire at the JBS Beef Plant, for example, includes a statement from the company stating that the "fire did not impact the primary production area."

In order to make it seem as if there had been an unusual amount of fires at food manufacturing plants, peddlers of these rumors included stories that were only tangentially related to the claim. Furthermore, the overall rumor uses a rather loose definition of "recent."

If you look at dates in the above-displayed image, for example, you'll notice that these fires date back to January 2021. That's more than 16 months ago. This disingenuous framing of a "recent trend" is even more apparent when we look at an article published on TimCast.com: The article suggests there's been a "strange trend" of food processing facility fires in the last six months. However, the article starts with a link to a 2019 news article. After including two additional links to news stories published in August 2019, the author writes that "just days later" there was a fire at a meat processing facility in Atlanta. By our count, the "just days" here is referring to a span of more than 700 days.

While we've seen plenty of people claiming that this is a "new trend," we have yet to see anyone compare the supposed number of recent fires to the number of fires in years past. When we searched for news articles about fires at food manufacturing plants in previous years, it became abundantly clear that this was not a "new trend." Here are a few of the news stories we found about fires, explosions, and other accidents that occurred at food manufacturing businesses in 2019.

The claim of a new "trend" is just simply incorrect.

When you realize the U.S. has more than 36,000 food and beverage processing establishments in operation (according to a report from the USDA in 2019), you see that the 26 news articles listed above refer to less than .1% of these facilities. Furthermore, when you recognize that operations at the majority of these facilities were only temporarily suspended, and that many of these stories refer to smaller facilities, you can see that this "threat" is far less than the threat some social media users assert.

We reached out to the North American Meat Institute, the National Pork Producers Council, and the National Chicken Council (three organizations that represent food production facilities) for more information about this rumor. While we have yet to hear back from NAMI or NPPC, Tom Super, the Senior Vice President of Communications with NCC, told us that these rumors did not document an "alarming trend." Super said:

I can only speak for chicken, but like any manufacturing plant, there are generally a few fires that occur each year across the country. Most of them are contained rather quickly. And certainly not enough to affect the chicken supply. There are about 200 federally inspected chicken slaughtering plants in the US and thousands more that further process chicken. I would not categorize this as an "alarming trend."

The Real Trend: A Recent Spate of Claims About an Increase of Food Processing Fires

We have seen, however, a new trend of people claiming an increase of fires at food processing facilities.

At the end of March 2022, U.S. President Joe Biden said that Russia's attack on Ukraine, and the subsequent sanctions, could impact the global food supply. Bloomberg reported:

President Joe Biden said that the world will experience food shortages as a result of Russia’s invasion of Ukraine, and production increases were a subject of discussions at a Group of Seven meeting on Thursday.

“It’s going to be real,” Biden said at a news conference in Brussels. “The price of the sanctions is not just imposed upon Russia. It’s imposed upon an awful lot of countries as well, including European countries and our country as well.”

Ukraine and Russia are both major producers of wheat, in particular, and Kyiv’s government has already warned that the country’s planting and harvest have been severely disrupted by the war.

Correction [June 9, 2022]: The number of fires we found reported in 2019 represented less than .1%, not 1% as previously stated, of the total number of food and beverage processing establishments in the United States.