Does Michelle Pfeiffer Have a Wife? 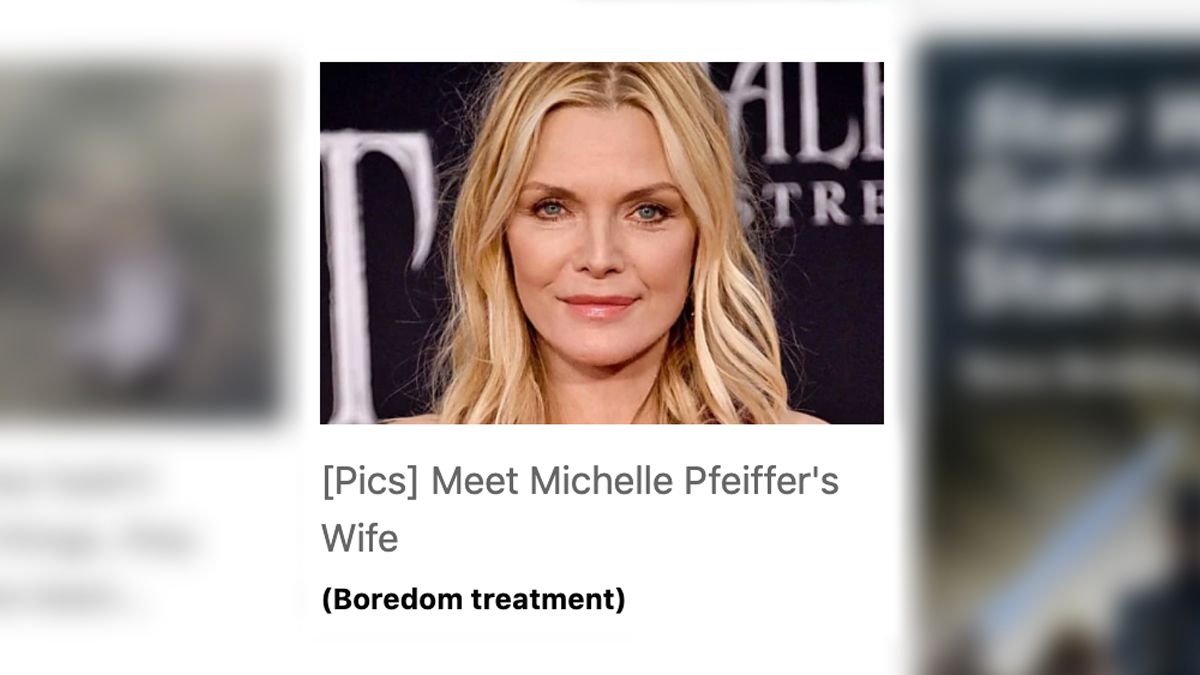 Claim:
Michelle Pfeiffer is married to a woman.
Rating:

In November 2021, an online advertisement invited readers to "meet Michelle Pfeiffer's wife." Pfeiffer is a Hollywood actor who has appeared in such films as "Ant-Man and The Wasp," "Batman Returns," "What Lies Beneath," "One Fine Day," "Avengers: Endgame," and "White Oleander."

The ad was hosted by the Outbrain advertising network. It's unknown who paid for the ad, but it led to a website named Boredom Treatment. According to domain information for Boredom Treatment, the website was registered in Iceland.

The ad led to a 68-page slideshow article. Pfeiffer finally appeared on page 67. However, no wife was mentioned because Pfeiffer is married to TV director and producer David E. Kelley. The couple wed in 1993.

The ad appeared to mislead readers into clicking through the entire article, while the article ended up telling the truth about Pfeiffer and Kelley's relationship:

Michelle Pfeiffer and writer David E. Kelley met on a blind date, which gives us hope that these kinds of first encounters can last. After all, these lovebirds have been together for 27 years now. They decided to become husband and wife in 1993, after going on dinner dates and movie nights for ten months.

Upon getting married, Pfeiffer got busy with the process of adopting a kid named Claudia, who then got christened during their wedding day. The following year, Pfieffer gave birth to their child named John. The now 63-year-old star is busy filming for 2023’s Ant-Man and the Wasp: Quantumania.

This misleading ad might remind some readers of another fact check about a celebrity's purported love interests. Earlier in 2021, an ad promised that readers would be able to "meet Jay Leno's gorgeous husband." The resulting article lasted well over 130 pages. None of them even mentioned Leno. It was simply another instance of an advertiser attempting to grab the attention of readers by misleadingly changing a celebrity's preferred type of lover.

In 2020, Pfeiffer shared an old picture of the pair as well as a new one that showed them still together many years later:

In sum, no, Pfeiffer does not have a wife. She is married to Kelley, a man. The ad was nothing more than misleading clickbait that led to an extremely lengthy 68-page article.