Critics claimed the billionaire philanthropist purposefully donned the symbol in video interviews about the COVID-19 pandemic. 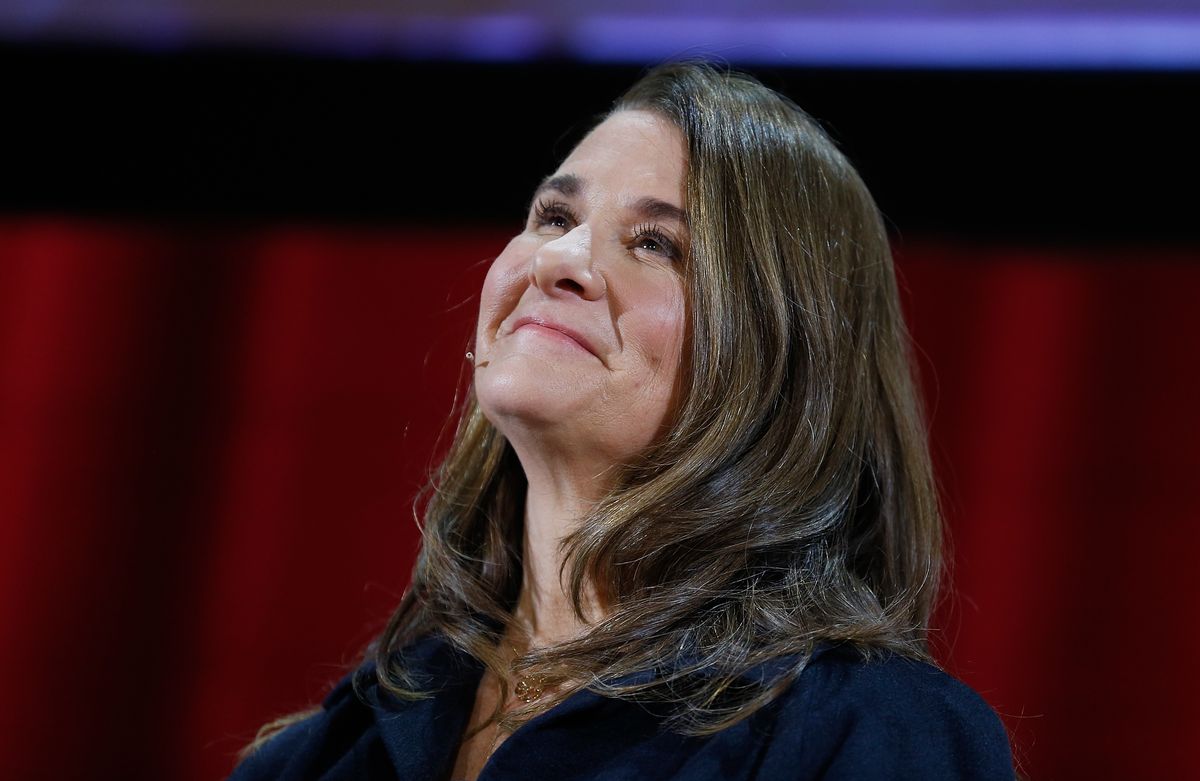 Claim:
Melinda Gates wore an upside-down cross in broadcast interviews in May 2020 to denounce Christianity.
Rating:

Based on our examination of the videos in question, Melinda Gates did wear a necklace with a pendant in the shape of a cross in interviews.

According to the Church of Satan, an upside-down or inverted cross is not an official symbol of loyalty.

Melinda Gates has been a frequent target of misinformation campaigns during the COVID-19 coronavirus disease pandemic. So it was perhaps not surprising in May 2020 when her jewelry raised new suspicions among conspiracy theorists that she — the famous philanthropist and partner to Microsoft co-founder Bill Gates — had sold her "soul to the devil."

In at least three video segments with journalists that posted online between May 7 and May 11 (via Politico, Yahoo! Finance, and NBC's "Today"), Gates criticized the U.S. federal government's response to the pandemic under U.S. President Donald Trump and discussed the Bill & Melinda Gates Foundation's work on finding a vaccine to build people's immunity against COVID-19 to end the crisis. On May 8, Gates tweeted:

But it did not appear to be Gates' comments in the video interviews that sparked controversy on social media. Rather, critics fixated on her appearance.

She was seen in a series of broadcast interviews wearing a pink blouse, hoop earrings, and a necklace — the latter of which conspiracy theorists believed to have displayed an upside-down or "inverted" cross that symbolized Gates' alleged allegiance to Satan and denouncement of the Christian faith.  A viral Facebook post read: Another popular post, which a YouTuber recited in a May 12 video, said:

Roman Catholic Melinda Gates in an interview on TODAY Show pushing hard for a global COVID-19 vaccine was wearing a bright and shiny upside-down cross around her neck. ... Who likes to wear inverted crosses? Satanists, pagans, witches, warlocks, New Agers, most people in Hollywood. The claim is two-pronged: that Gates did in fact wear an upside-down or inverted cross in video interviews, including for NBC's "Today" show, and that an inverted cross is a symbol of Satanic worship.

While unpacking the former, keep in mind that Bill and Melinda Gates have been major targets of misinformation campaigns by anti-vaccine advocates and conspiracy theorists for more than 10 years, a result of their foundation's aggressive research to curb health disparities worldwide via vaccines, or shots that build populations' immunity against certain viruses.

Yet a new era of dubious claims involving the billionaire couple surfaced during the COVID-19 pandemic, ever since the coronavirus was first reported in humans in Wuhan, China, in late 2019. Doomsday theorists came up with the idea that the Gateses were trying to "microchip" or control world populations via a COVID-19 vaccine — a conspiracy theory that surfaced in various forms, including a doctored image that supposedly showed the words "Center for Global Human Population Reduction" inscribed on a Bill & Melinda Gates Foundation building.

For the jewelry claim, though, when asked by Snopes if Melinda Gates owned a necklace with an inverted cross, and if she was wearing it during the May 2020 interviews, representatives of the Bill & Melinda Gates Foundation (which handles most media requests for the couple) did not respond to the inquiry as of this writing.

Upon examination of the interview footage on the "Today" show website, for example, Gates was indeed wearing a necklace that appeared to have a charm in the shape of a cross and one of the cross' arms looked longer than the rest.

But here's what makes the answer to the claim murky: It's unclear whether the cross pendant itself had four equilateral arms, like a Greek cross or plus sign, or if it had one longer arm like the Latin cross.

For the former theory, it was possible the Greek cross included a rounded clasp to attach the pendant to the necklace chain and that clasp made one of the cross' vertical arms appear longer than it actually was. That was the case in low-resolution photos of Chelsea Clinton, the daughter of former U.S. President Bill Clinton and Secretary of State Hillary Clinton, when conspiracy theorists online raised similar questions about her cross-shaped necklace in 2018. A spokesperson for Chelsea Clinton confirmed that she, indeed, sported a "Greek Cross or an equilateral cross" around her neck on "rare occasion."

On the other hand, Gates could be wearing a Latin cross, as critics claim. If that's the case, the next questions are these: Did she purposefully wear the cross upside down or did the charm flip unintentionally?

Based on the available evidence, we cannot make that call. We can, however, provide context as to why wearing a cross pendant, even one inverted, may or may not be a statement of Gates' ideologies.

In several public statements, including a video interview with a reporter for The Guardian in 2012, Gates has identified as a follower of the Catholic Church. The reporter, for example, described Gates as a "church-going, believing Catholic" and Gates did not refute the claim.

That piece of her identity could be the reason for why she wore a necklace with a cross in 2020, or not. Nonetheless, according to Catholic Answers, which defines itself as a "media ministry" that explains and defends the Catholic faith, even if Gates' cross was upside-down, the piece of jewelry could still be a statement of her devotion to the church. Its website states:

The truth of the matter is that the upside down cross (without a corpus, so not a crucifix) is an ancient symbol of St. Peter’s crucifixion. Tradition tells us that when St. Peter was martyred, he insisted that he be crucified upside down as he did not believe himself worthy to be crucified in the manner of his Lord.

That said, some people believe an upside-down cross is a statement against Jesus Christ, who is revered in Christianity, and in favor of Satan. For example, a 1993 document, titled "Satanic Cult Awareness" and sponsored by the U.S. Department of Justice's National Institute of Justice, said an upside-down cross is "blaspheme of the Christian cross" and a symbol that law enforcement and criminal justice agencies should be aware of. On page 40 of the document:

But many people who call themselves Satanists reject the inverted cross as an official symbol. According to the Church of Satan, which Encyclopaedia Britannica defines as "counterculture group founded in the United States in the 1960s," the group's main symbol is the Sigil of Baphomet, incorporating a pentagram, a goat's head, and Hebrew letters.

Literature has long depicted anyone who has embraced Satan and thus rejected Jesus as having embraced the reversed cross as symbolic of that act. Satanists are free to employ any symbols which they feel have resonance, so if such an upside-down cross has personal meaning they could use it.

Additionally, for some people, the cross with one longer arm could have no meaning at all. In the words of the Wisconsin Evangelical Lutheran Synod:

Those are people who do not put any significance into using that symbol — it’s just the trendy thing. ... It means that when you see someone with an upside-down cross, you may not know what the intended message is until, and unless, you ask that person.

In sum, given the fact that an upside-down or inverted cross could mean anything — including a dedication to St. Peter's crucifixion, not necessarily a symbol of allegiance to Satan and denouncement of Christianity — and the fact that Gates has publicly identified herself as a member of the Catholic Church, we rate this claim "Mostly False," with the caveat that she did wear a necklace with a cross-shaped pendant for interviews with journalists in 2020 and the position and exact shape of the cross is difficult to discern in available video footage.