Did TikTok Videos 'Expose' How McDonald's McRib is Cooked?

Like the McRib, these TikTok videos were only available for a limited time. 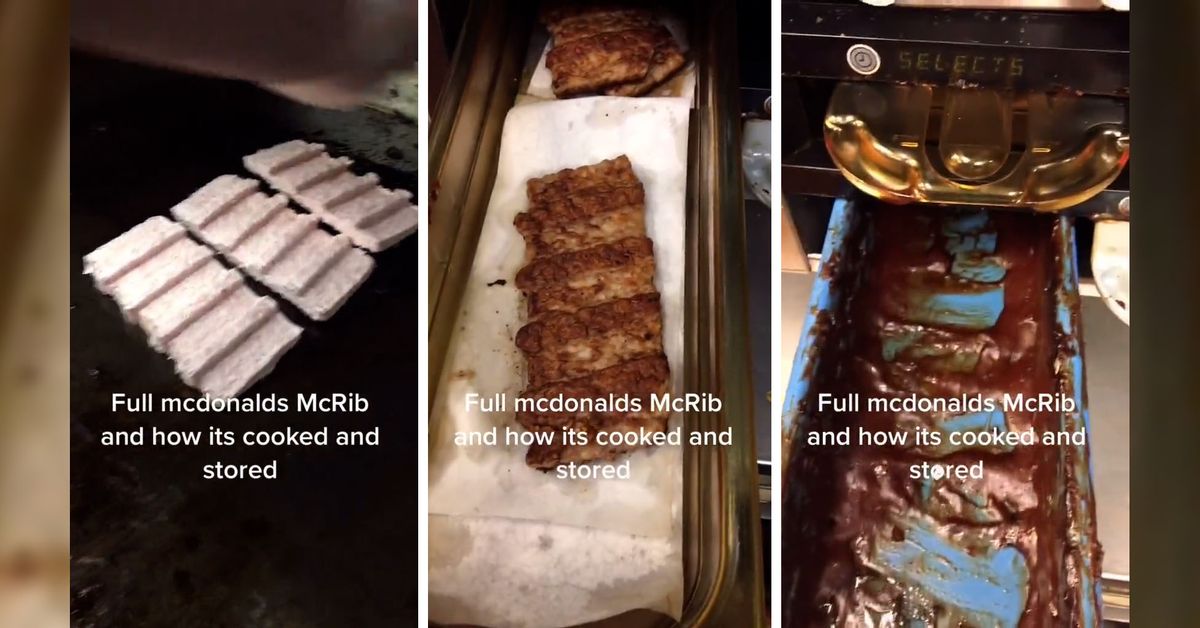 McDonald's famous McRib sandwich debuted in 1981. "Here's the blueprint," wrote syndicated columnist Ken Hoffman in 1998, describing the treat as "4 ounces of slapped-together pork chunks molded in the shape of a miniature rack of ribs, smothered in tangy barbecue sauce and topped with slivered onions and pickles on a hoagie roll."

This week I reached out for a McRib sandwich, available for a limited time only (again and again) at McDonald's.

Of all the specialty sandwiches that come and go at McDonald's, the McRib is by far the most popular. It's been a recurring character, sort of like Newman on "Seinfeld," since 1981.

Over the years, the McRib was such a hit that it was featured in a number of TV advertisements, including this one from 1989:

Long after the McRib's 1981 debut, the TikTok video platform arrived in 2016. In the years following its launch, TikTok quickly became popular with its lineup of users' videos recorded in fast food kitchens. We previously reported on genuine TikTok videos that depicted how Taco Bell's refried beans are made, how Chick-fil-A's chicken nuggets are prepared, and how Panera Bread makes its soups, chicken, and macaroni and cheese. It came as no surprise when new TikTok videos surfaced that showed how the McRib was made.

In December 2020, the McRib returned to McDonald's once again. The Associated Press reported that it was being made available nationwide for the first time in eight years.

It is true that, on Dec. 7, 2020, TikTok user @thatonedepressedginger posted a video of the McRib being prepared in a McDonald's kitchen. It was viewed nearly 8,000 times in a few days.

Meanwhile, another video from the same TikTok user had been viewed nearly 3 million times, and depicted frozen McRib patties being added to a grill. It also showed where cooked McRib patties were stored before being served to customers. One TikTok user commented: "@mcdonalds ayo they exposing you."

We were able to download and review the videos days before they were removed from TikTok. Another video from the same TikTok user purported to show a Quarter Pounder with Cheese being prepared.

We also found two other TikTok videos that showed a McRib being made.

Previously in 2013, a photograph of a frozen McRib patty went "viral" after appearing on Reddit. PennLive.com described the virality of the picture at the time:

It looks like a solid white brick with ridges. But it’s supposed to be a succulent pork patty that serves the basis for one of McDonald’s most popular items: the McRib sandwich.

But an employee with a smartphone just happened to snap a picture of a slab of frozen McRib meat, fresh from the box at a McDonald’s somewhere out there. And now that photo has raced around the Internet, raising eyebrows and deadening appetites. It’s the exact opposite of McDonald’s marketing that always shows its fast food in only the best light.

In December 2020, the McRib was set to be available for a limited time, as is tradition.

Update: On Dec. 15 and 18, two more videos that showed McDonald's McRib being prepared were added to this story.

Update: On Dec. 28, this story was updated to reflect the fact that the videos had been removed from TikTok.