Is This a Real Photo of Kevin McCarthy with Elaine Chao, Mitch McConnell’s Wife, in Davos? 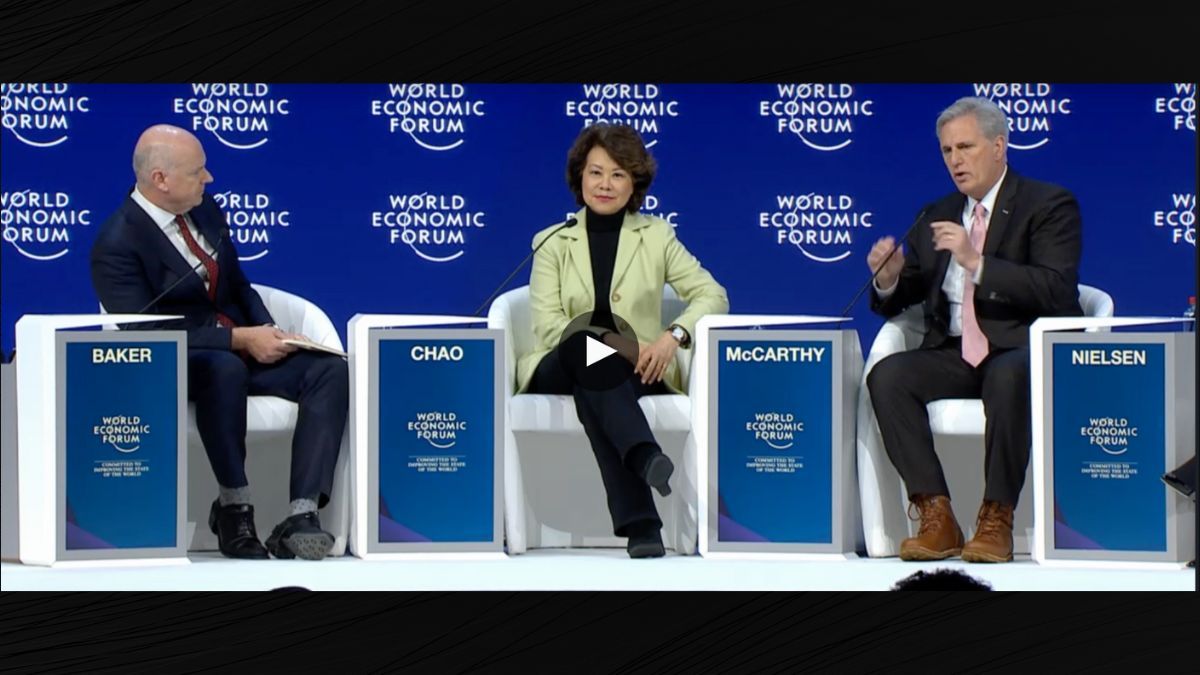 In early January 2023, as Republican U.S. Rep. Kevin McCarthy suffered numerous vote losses in his quest to become speaker of the House, where his party held a slim majority, Mitch McConnell, his counterpart in the Senate and minority leader, broke the record as the longest-serving senator in the chamber's history.

Republicans remained divided on McCarthy as House speaker due to a small but vocal group on the far right. Meanwhile, as of this writing, former U.S. President Donald Trump was attempting to divert Republican ire toward McConnell and his wife, Elaine Chao, using anti-Asian rhetoric to refer to the latter. In a post on TruthSocial on Jan. 4, 2023, he wrote: "we ought to be fighting Mitch McConnell and his domineering, China loving BOSS, I mean wife, Coco Chow. The harm they have done to the Republican Party is incalculable."

We noticed, however, that back in 2018 all of these parties appeared to be on the same page. A photograph of McCarthy and Chao, who was then-U.S. Secretary of Transportation in the Trump administration and who was speaking at the World Economic Forum (WEF) in Davos, Switzerland, made the rounds on the internet.

This photograph is authentic. The panel they were speaking on was titled "Strategic Outlook: United States" and was moderated by Gerard Baker, who was editor-at-large at The Wall Street Journal. They were joined by Kirstjen Neilsen, then-U.S. Secretary of Homeland Security. The full panel can be found here, and you can see a screenshot of it below:

At the time, McCarthy was serving as House majority leader. In the panel, around the 2:34 mark, he mentioned having dinner at the house of Klaus Schwab, the chairperson of the WEF.

"You've got to understand what does 'America First' mean," McCarthy said in the talk. "We wanted to focus on the economics of America, we want the citizens to be safe at home and abroad.

"As I sat around Klaus' dinner last night, what's interesting is the number of countries who are now talking about their tax system," he continued, explaining the reasoning behind Trumps' "America First" slogan. "With doing something as big as the tax change [...] the economics of America rising helps the rest of the world. It also helps from a safety perspective around the world."

After the attack on the Capitol on Jan. 6, 2021, Chao criticized Trump and resigned from her position. In late 2022, Trump also blamed her and McConnell for the "turmoil" in the Republican party, while continuing to use racist language against her.

McConnell, meanwhile, appeared alongside Democratic U.S. President Joe Biden in early January 2023 to promote bipartisan efforts to improve infrastructure. While much of his career has been spent stymying the Democratic agenda, McConnell was increasingly criticizing Trump and shifting toward promoting a more bipartisan image.

We therefore rate the above claim as a "True."