Does a Meme Accurately Describe 'Why It's a Big Deal Kamala Harris is VP'?

Harris made history several times over when she was sworn in as U.S. vice president on Jan. 20, 2021. 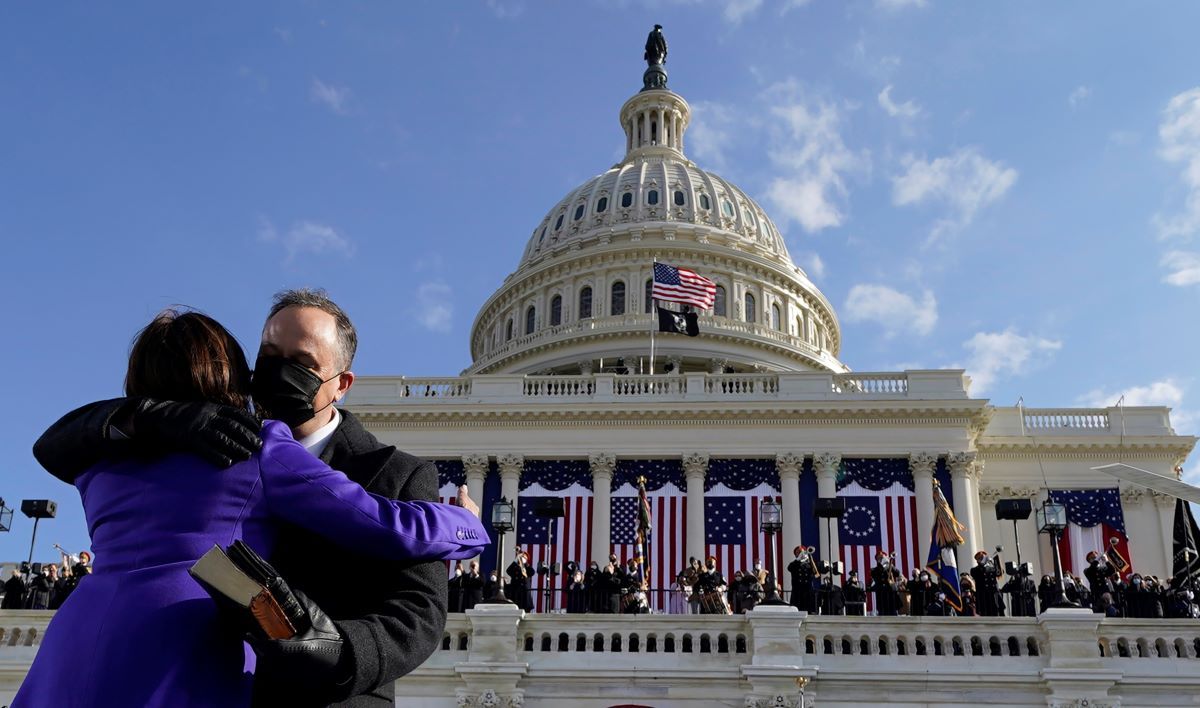 Claim:
A meme accurately describes the discrimination that Kamala Harris, a Black woman, would have faced under previous U.S. vice presidents.
Rating:

The claims in the meme contained a high degree of historical accuracy.

In some cases the meme over-simplified certain discriminatory practices and made some relatively minor errors in identifying the vice president in office during certain major reforms.

On Inauguration Day, Kamala Harris made history several times over. In being sworn in on Jan. 20, 2021, the outgoing California senator became the first Black person, first woman, and first person of South Asian heritage to be elevated to the vice presidency.

The historic nature of her achievement was placed in stark context in a viral meme that showed Harris, whose parents immigrated to the United States from India and Jamaica, respectively, juxtaposed with a long list of official portraits of white men. (Charles Curtis, who served with Herbert Hoover from 1929 to 1933, had some Native American heritage and was therefore the first person of color to hold the office of vice president).

The meme also highlighted several purported landmarks in the slow progress of women's rights and racial desegregation in the United States, as follows:

Don’t understand why it’s a big deal that Kamala Harris is VP? Until Red box? She would have been enslaved. Until Blue box? She couldn’t vote. Until Yellow box? She had to attend a segregated school. Until Green one? She couldn’t have her own bank account. The following screenshot shows a selection of instances of the meme on Facebook and demonstrates its popularity on social media in January 2021: On the whole, the claims contained a high degree of historical accuracy, though in some cases they over-simplified certain discriminatory practices and made some relatively minor errors in identifying the vice president in office during certain major reforms. As a result, we're issuing a rating of "Mostly True." The following is our assessment of each of those claims.

The creator of the meme appears to have chosen the year 1865, and therefore the tenure of Johnson, because that is the year in which the 13th Amendment, which outlawed slavery, was passed.

The text of the amendment reads as follows:

Neither slavery nor involuntary servitude, except as a punishment for crime whereof the party shall have been duly convicted, shall exist within the United States, or any place subject to their jurisdiction.

Congress passed the amendment in January 1865, while Johnson was vice president-elect to President-elect Abraham Lincoln, but it was not ratified by the states until December 1865, by which time Johnson had ascended to the presidency after Lincoln's assassination, leaving the vice presidency vacant for the duration of his presidency. So the sequence of events is a bit muddled, but it is certainly reasonable to place the 13th Amendment, and the abolition of slavery, during the Johnson era.

Slavery was far more prevalent in the southern states, but on average, a Black woman in the U.S. shortly before the 13th Amendment had close to a 90% likelihood of being enslaved. From a human rights perspective, Black people had no legal or constitutional protection from slavery, which is likely the thrust of the point made in the meme.

The 19th Amendment, which gave women the right to vote, was passed by Congress in June 1919 and ratified by the states in August 1920.

The text of the amendment read:

The right of citizens of the United States to vote shall not be denied or abridged by the United States or by any State on account of sex. Congress shall have power to enforce this article by appropriate legislation.

On both those dates, Thomas Riley Marshall was vice president, under President Woodrow Wilson. So the meme was incorrect in stating that women could not vote until the vice presidency of Calvin Coolidge. In fact, women voted for the first time in the November 1920 election, which saw Warren Harding and his running mate Coolidge elected president and vice president, respectively.

That inaccuracy does not impinge upon the truth of the broader point being made in the meme, namely that Harris, as a woman, would not have been able to vote in the United States until the early 1920s. However, the meme does miss an important additional barrier to voting rights that Harris, as a Black woman, could have faced even after the passage of the 19th Amendment.

It wasn't until the Voting Rights Act of 1965 that such practices were prohibited by federal law, although many activists argue that present-day voter-ID rules continue the legacy of electoral restrictions that have a disproportionate impact on voters of color.

The creator of the meme appears to have selected the vice presidency of Nixon (1953 to 1961) because that was the period during which the U.S. Supreme Court declared racial segregation in public schools constituted a violation of the Equal Protection clause in the 14th Amendment of the Constitution, in the landmark 1954 ruling in Brown vs. the Board of Education. In a follow-up ruling in 1955, the court ordered school districts to arrange for the desegregation of public schools "with all deliberate speed."

Most, though not all, schools were racially segregated in the 19th and early-20th centuries in the United States. So a Black student, such as Harris, would very likely have been forced to "attend a segregated school," as the meme claims. Brown vs. the Board of Education marked the beginning of the end of school segregation, but it did not bring about integration overnight. Over the course of the 1950s, 1960s, and 1970s, state lawmakers and local authorities fought protracted and often bitter battles to resist the Supreme Court's clear mandate.

So while the meme was right to point out that Black students would be very likely forced to attend segregated schools before the decision in Brown vs. the Board of Education, it's also the case that many Black students were forced to attend segregated schools for many years after the ruling, as well. What changed in 1954 was that the nation's highest court clearly declared that system of racial segregation to be unconstitutional.

The meme appears to refer to the enactment of the Equal Credit Opportunity Act (ECOA) in the early 1970s, which made it illegal for financial services companies to discriminate against customers on the basis of anything other than their creditworthiness. The legislation stated that:

It shall be unlawful for any creditor to discriminate against any applicant, with respect to any aspect of a credit transaction
(1) on the basis of race, color, religion, national origin, sex or marital status, or age (provided the applicant has the capacity to contract)...

However, the law wasn't enacted until October 1974, when the office of vice president was vacant. Spiro Agnew resigned in late 1973, after he was charged with bribery and tax fraud, and his replacement, Gerald Ford, ascended to the presidency in August 1974, after Nixon resigned. So the meme is again mistaken on the precise sequence of events. While Agnew was vice president, banks could (and did) legally deny credit to a woman on the basis of extraneous considerations such as her marital status, her husband's income and credit history, and so on.

The meme also somewhat overstated the restrictions in place before 1974. Women, including married women, could open their own bank accounts before the ECOA was passed, but often faced difficulty and discrimination in doing so. It was particularly difficult for women to obtain a line of credit or a credit card, in her own name. In 1972, the National Commission on Consumer Finance published a report that found the following common discriminatory practices in lending:

What the ECOA changed in 1974, and what the meme appears to allude to, is that banks and lenders could no longer legally engage in such discriminatory practices.