Is This Sign at the United States-Mexico Border Real?

An image purportedly showing a U.S. border sign saying "lots of free stuff ahead" is — you guessed it — nothing more than a poorly-done digital edit. 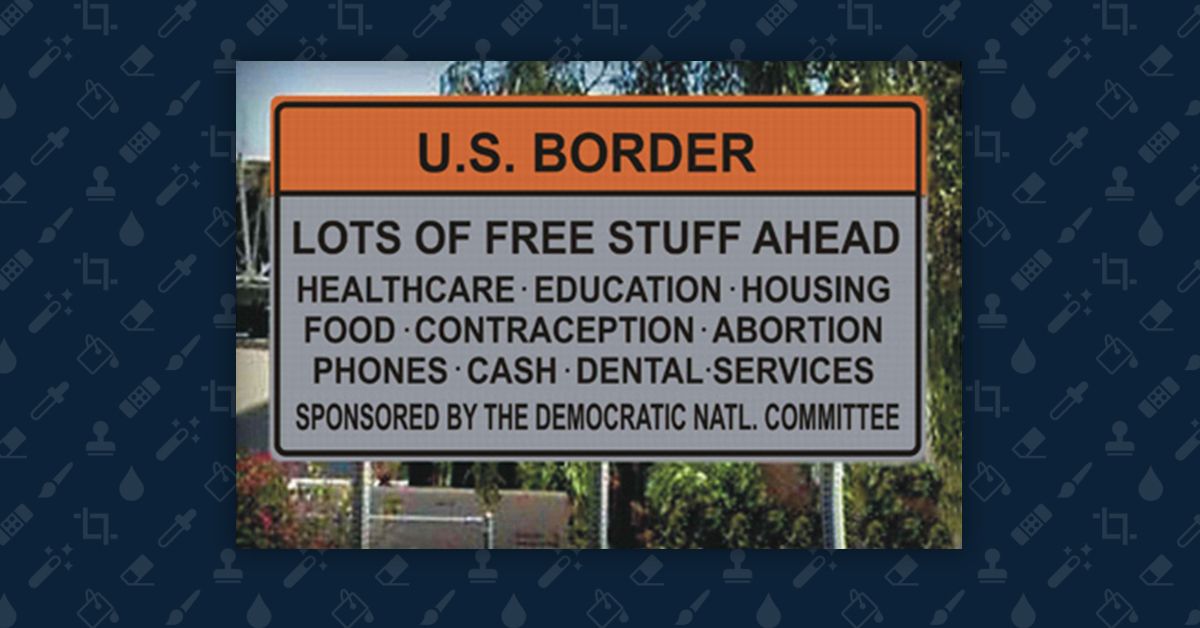 Claim:
A sign at the United States border and sponsored by the Democratic party informs travelers from Mexico that there's "lots of free stuff ahead."
Rating:

An image purportedly showing a border sign informing travelers that they would receive "lots of free stuff," including abortions, phones, and cash, once they crossed over into the United States has been making its away around the Internet for several years, receiving new life during a flurry of disinformation about asylum-seekers in April 2018: This image was created during the Obama administration, and it is frequently shared along with anti-immigrant (and anti-Democrat) rhetoric.

Different digital alterations of this sign (and none that are done particularly well) have also been used to malign another group of people: Muslims. A popular version contains a message warning Muslims that the United States is a "sharia-free zone" and that travelers should set their watches forward "1400 years."

The same "joke" has been repeated in a variety of languages on signs ostensibly sitting on the borders of the United Kingdom, Greece, and the Czech Republic: These images were all created by digitally adding a message over a genuine sign that truly does sit on the United States border. The original sign is aimed at travelers from the United States and appears near or at nearly every land crossing; it warns not about "sharia law" or "free stuff" but informs travelers about bringing weapons into Mexico, where guns are strictly illegal: This photograph was taken in San Luis, Arizona by reporter Molly O'Toole, and was included in a 2010 photo essay about the Southwest border:

These photographs were taken on an 852-mile, 72-hour trip across the Southwest border, from San Diego, California to Arizona and back. Many citizens from the United States and Mexico have never seen the line that divides and defines their countries, marked by walls, barbed wire fences, U.S. Border Patrol checks and, increasingly, controversy.

A sign at the border in San Luis warns against bringing arms into Mexico. U.S. attorney Dennis Burke say that arms trafficking to Mexico is a major problem.

As mentioned, similar signs warning against bringing guns into Mexico can be found at various places along the border: A report from NPR stated that about 70 percent of weapons seized by Mexican authorities between 2009 and 2014 came directly from the United States:

From 2009 to 2014, more than 73,000 guns that were seized in Mexico were traced to the U.S., according to a new update on the effort to fight weapons trafficking along the U.S.-Mexico border.

The figure, based on data from the Bureau of Alcohol, Tobacco, Firearms and Explosives, represents about 70 percent of the 104,850 firearms seized by Mexican authorities that were also submitted to U.S. authorities for tracing.

The data was analyzed by the Government Accountability Office, which notes in its report that U.S. police agencies have acknowledged firearms smuggling is fueling violent crime in Mexico.