Is This the First Caravan Member to Be Granted Asylum in the United States?

A cynical attempt to smear asylum seekers in the 2018 “caravan” of immigrants is actually a 2009 photo from a pornographic website. 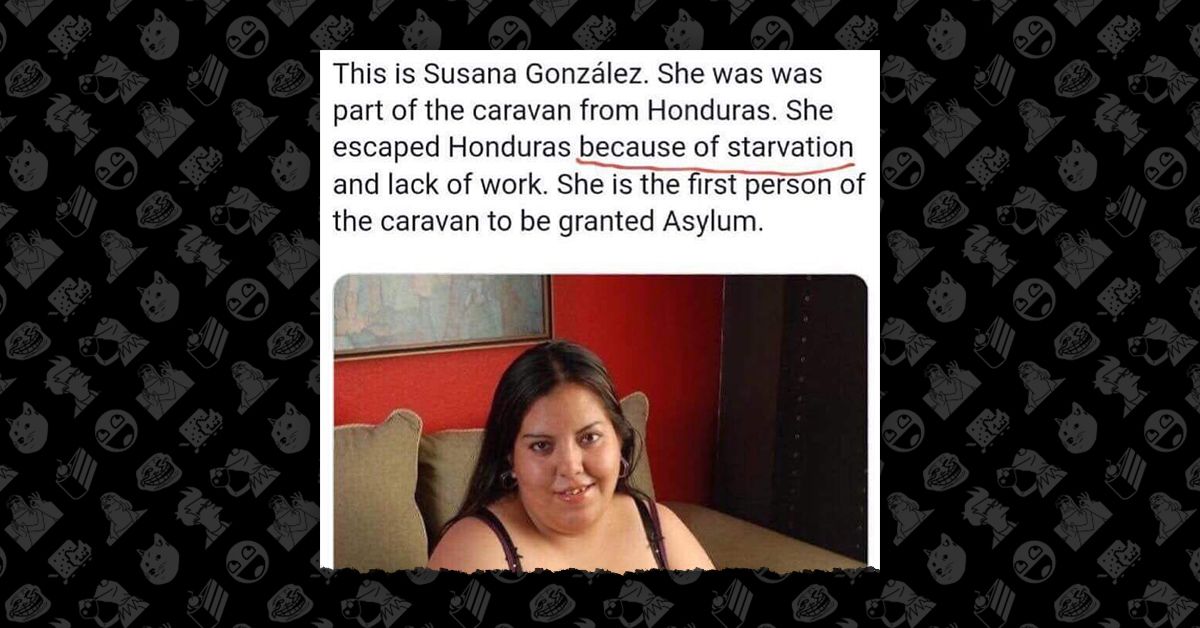 Claim:
A meme purporting to include an image of a Honduran asylum seeker and “caravan” member named Susana González shows the first woman to be granted asylum in the United States in that group.
Rating:

On 1 May 2018, the first group of people from a controversial "caravan" hoping to escape extreme violence and poverty in their home countries approached border agents at the United States-Mexico border to request asylum:

Border agents slowly admitted 17 migrants, mostly women and children, on Tuesday, according to organizers with the Pueblo Sin Fronteras immigrant rights group. Eight from the caravan were allowed in on Monday night.

Those with an explicitly anti-immigration agenda have — since coverage of the caravan first began — used the demonstration as a disinformation cudgel, variously portraying the group as a murderous horde of criminals or disingenuous foreigners seeking handouts. At its worst, these misrepresentations contain wholly fabricated information.

In keeping with this cynical tradition is a meme that gained significant viral traction when news first broke that some caravan members had arrived at the El Chaparral border crossing that bridges Tijuana, Mexico and San Diego, California: The premise of this poorly proof-read, insulting meme is that the United States asylum process is a joke, because it lets people like Susana, who is not emaciated, claim she is starving to reap benefits — the "free handout" flavor of alt-right xenophobia.

Among the myriad problems with this claim is the fact that the image in question comes from a pornographic photoshoot that occurred at least before 2009, and which can be found on a variety of web sites, including "Plumpersworld.com": The idea to brand an image from this photoset as an anti-caravan statement appears to date back to at least early April 2018. Like so many fevered alt-right machinations, further background into its origins are available on the anonymous message board 4chan. An image of the original tweet can be found in the “/pol/” portion of the website — nominally a place for politically incorrect talk, but in reality a haven for hate speech. That (now hidden) 6 April 2018 tweet, from an account that has since changed its name and protected its tweets, contained this additional (and equally typoed) assertion:

After being granted Asylen [sic] from a California Immigration Judge, she entered El Paso, Texas from Juarez, Mexico. She will be united with her sister who escaped Honduras in 2015.

This description is nonsensical for more than one reason, but it bears repeating that the asylum seekers in the caravan are requesting asylum at a Tijuana crossing, not Juárez. Moreover, Susana González is the name of a popular Mexican actress from whom the name appears to have been stolen to muddy the waters and further the meme's false narrative. The meme is nothing more than a crude misrepresentation of an old pornographic photoshoot using an appropriated name; therefore, its claims are patently false.