If a hurricane is headed for Florida, this creative digital artwork showing a storm hovering above Miami will probably be posted on social media. 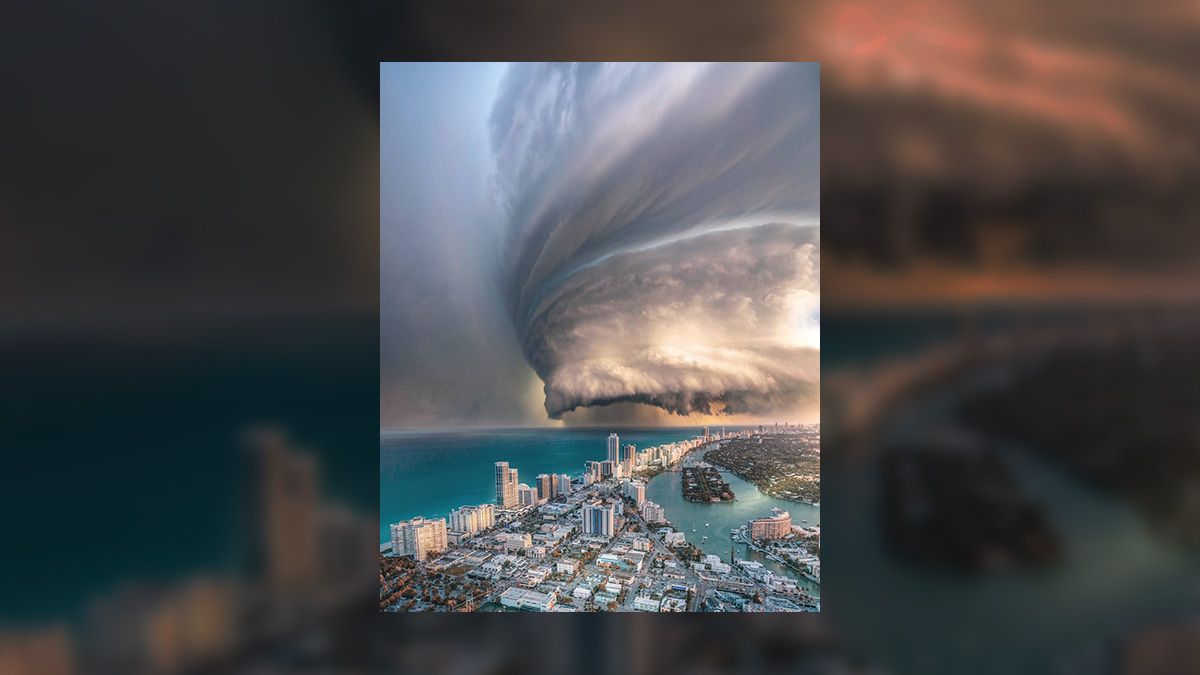 A picture that was taken from high in the air and shows Hurricane Ian or another storm hovering over Miami or Fort Myers is real, according to the rumor. (Image Via Brent Shavnore (Instagram))

Claim:
A picture taken from high in the air that shows Hurricane Ian or another large storm hovering over Miami, Florida, is real.
Rating:

In the aftermath of Hurricane Ian, which made landfall in Florida on Sept. 28, 2022, an old picture of massive storm clouds hovering above the state's coastline was shared on social media. One reader asked us in an email if it showed Ian touching down on Fort Myers, while others mentioned Miami. However, this was not a genuine photograph, but rather a composite image of the city of Miami that had been combined with a picture of storm clouds that was captured in Kansas. It was created in 2019 by a digital artist.

On Oct. 2, the fact-checking team at Misbar reported that the fake picture was going around on Twitter with the false claim that it showed Ian in Miami.

The user misleadingly claimed to have taken the picture from an airplane as Ian hit Florida.

This wasn't the first time that we reported on this fake photograph. On Sept. 3, 2019, we published another fact check and also gave a "False" rating on the claim that the same image showed Hurricane Dorian.

The fake photograph was previously posted on Reddit on April 28, 2019. After we waded through all of the jokes and other remarks that were made in the top comments, we found several helpful links buried in the replies.

"This post is clearly Photoshopped," a comment read. One user posted this Google Maps link that showed the same high-angle view in Miami that's seen in the viral image. Another user appeared to figure out that the storm clouds that were copied and pasted into the photograph of Miami came from this picture that was originally taken in Leoti, Kansas, on May 21, 2016. Several people on Twitter had also tweeted this comparison as well.

The creator of the digital artwork was Brent Shavnore. Shavnore once uploaded a tutorial video that showed how he made the art. Part of that video was apparently reshared when Dorian made landfall in 2019. (The videos on Shavnore's YouTube account are no longer available.)

After social media users shared his work and claimed it showed Ian, Shavnore retweeted an article from Eleanor McCrary, a fact-check journalist with USA Today. McCrary reported that Shavnore had originally shared the artwork on his own Instagram page on April 12, 2019, just 16 days before the Reddit thread was created.

McCrary also noted quite the coincidence. On Sept. 28, just as Ian was beginning to slam Florida's coast, Shavnore himself was captured in a picture that showed him running through the rain. It was taken by Getty Images photographer Joe Raedle.

For further reading, we previously published reporting about several other rumors on the subject of Ian. We also put together a collection of fake hurricane photographs. This collection can be a handy resource when social media users inevitably reshare some of the pictures in the future, misleadingly claiming they are real and were taken during a new storm.

“FAKE ALERT: No, This Is Not a Video of Hurricane Dorian as Seen from Florida.” The Times of India, 7 Sept. 2019, https://timesofindia.indiatimes.com/times-fact-check/news/fake-alert-no-this-is-not-a-video-of-hurricane-dorian-as-seen-from-florida/articleshow/71023231.cms.