How Old Is Punxsutawney Phil?

According to legend, the world's most famous groundhog has been predicting the weather since 1886. 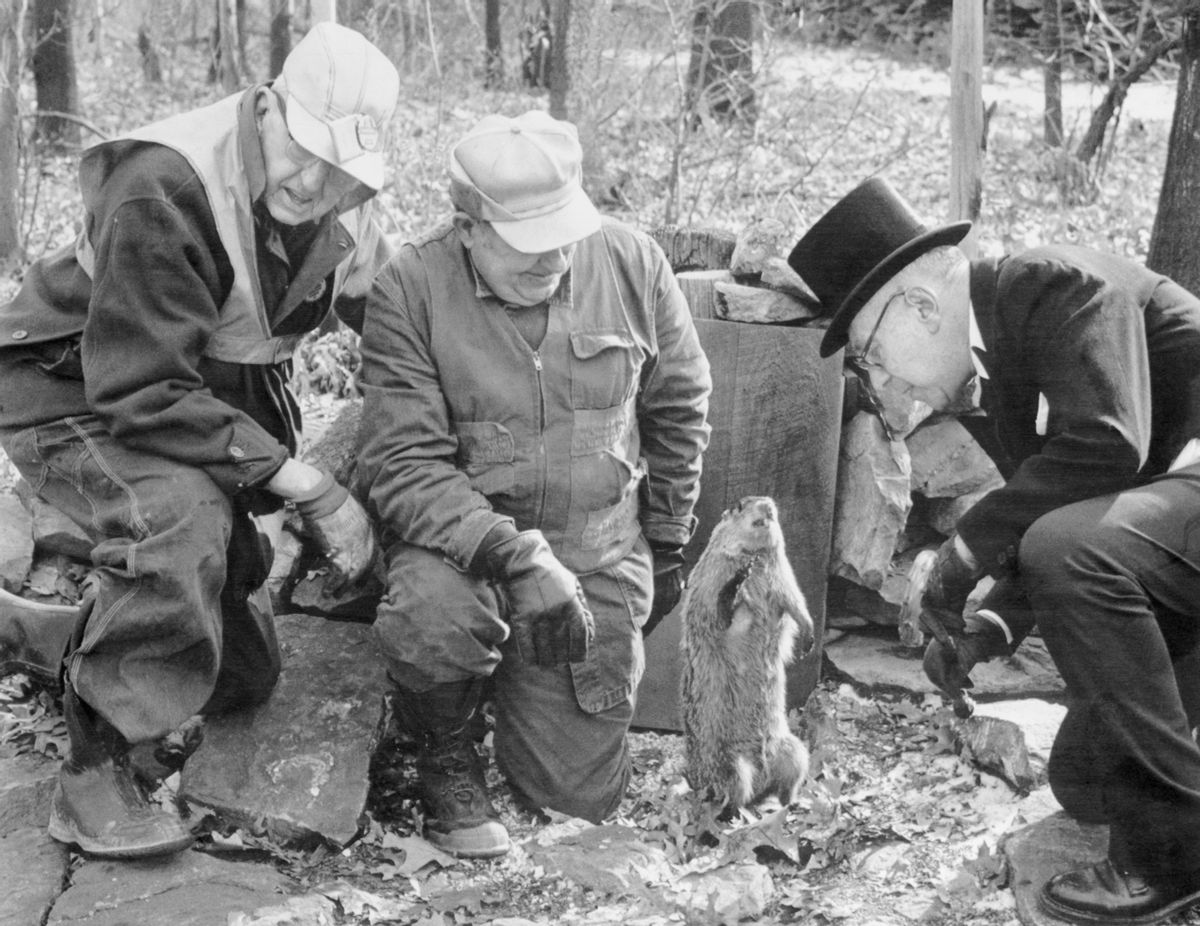 On Feb. 2, 2022, Punxsutawney Phil, a weather predicting immortal groundhog that lives in a hole on Gobbler's Knobb in Pennsylvania, crawled out of his burrow for the 136th time, and in his best groundhogese, declared that there would be six more weeks of winter.

At least, that's how the legend goes.

According to the Punxsutawney Groundhog Club, Phil has been predicting the weather since 1886. This is a bit hard to believe, of course, as the average groundhog only lives between three and six years. So what's Phil's secret to longevity? According to the PGC, Phil drinks a secret elixir every summer that grants him seven more years of life:

There has only been one Punxsutawney Phil. He has been making predictions since 1886! Punxsutawney Phil gets his longevity from drinking the "elixir of life," a secret recipe. Phil takes one sip every summer at the Groundhog Picnic and it magically gives him seven more years of life.

Where does this "elixir of life" come from? It's a recipe? Does that mean someone makes it? And if this elixir gives Phil seven years of life why does he have to drink it every summer? Unfortunately, we haven't been able to find answers to these questions.

To make matters a bit more confusing, it's unclear how Phil was chosen for to take on this most important task. The traditions of "groundhog day" (predicting the weather based on an animal's behavior) stretch back passed Phil's first prediction in 1886 to the Christian feast day of Candlemas. Prior to Phil becoming the "prognosticator of prognosticators," people attempted to predict the weather by observing bears, badgers, hedgehogs and other animals that tended to emerge from hibernation around this time. The groundhog likely became the prognosticator of choice in Pennsylvania as hedgehogs weren't plentiful and bears were dangerous.

As we wrote in "The Origins of Groundhog Day":

However, the groundhog only became the mascot of springtime after early German settlers migrated to the northeastern United States. Before that, the duty was given to bears, badgers, or hedgehogs, also hibernating species that emerge around the same time of year, but neither badgers nor hedgehogs are native to the Pennsylvania region, and presumably nobody wanted to hang around a black bear den long enough to see whether or not he was startled by his shadow.

The groundhog day tradition in Punxsutawney, Pennsylvania stretches back to the late 1800s. And while the PGC would like you to believe that the original groundhog was kept alive with a secret immortal elixir, the truth is likely a little more gruesome: The original "Phil" was probably eaten.

Before "Phil" became "Phil" (the groundhog wasn't named Phil until the 1960s), the annual Groundhog day festivities centered around a groundhog day hunt. Pennsylvanians would gather up, go into the woods, and hunt groundhogs for a feast. A few groundhogs were kept alive to make weather predictions, an idea that the author of this newspaper clipping from a 1905 edition of the "Punxsutawney Post" apparently found ridiculous, as they wrote that anyone could if the weather would be wet or dry by simply looking up at the sky. 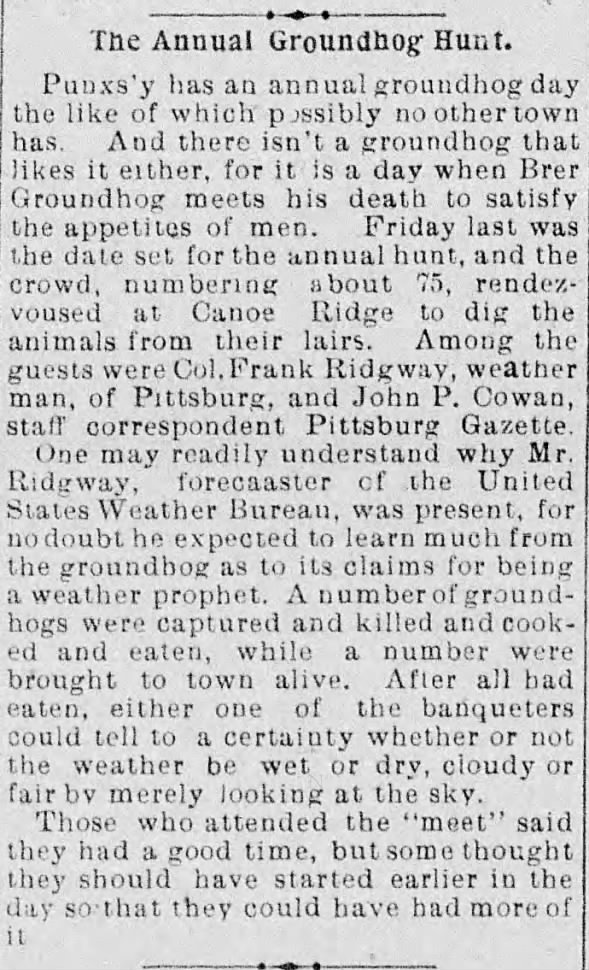 Punxsutawney Phil Has a 100% Accuracy Rate?

According to the PGC, the immortal groundhog Phil has never been wrong. Since he made his first weather prediction in 1886, the club claims, Phil has been correct 100% of the time.

How often is Phil's prediction correct?
100% of the time, of course!

That, however, doesn't line up with statistics from meteorologists. Live Science reports that Phil has a lifetime accuracy rate of about 39%. Since 1969, Phil's predictions have been right 36% of the time.

Phil does a shade poorer when you check his performance against actual weather outcomes since 1969, when the accuracy of weather records is less in question, said Tim Roche, a meteorologist at Weather Underground. From 1969 on, Phil's overall accuracy rate drops to about 36%.

The groundhog's powers of prognostication are slightly better when he doesn't see his shadow, though. "When Phil predicted a short winter, he was much more likely to be right," Roche previously told Live Science. "Out of the 15 times that he didn't see his shadow and predicted an early spring, he got it right seven times. That's a 47% accuracy rate," he said at the time.

So How Old Is Punxsutawney Phil, Really?

The tradition of Groundhog Day on Gobbler's Knob exists in a state of suspended disbelief, where humans can understand groundhogese, where immortal elixirs are brewed to extend the life of a weather predicting rodent, and where the appearance of a shadow (or lack thereof) determines the next six weeks of weather.

On any other day, we'd tell you that the "Punxsutawney Phil" that predicted the weather on Gobbler's Knob today is probably the 30th groundhog to have held the title of "seer of seers," that the current "Punxsutawney Phil" is probably about three-years-old, and that the original Phil was most likely eaten after predicting weather. But today, on Groundhog Day, we'll buy into the idea that there's an immortal groundhog living in Pennsylvania who emerges once a year to look at his shadow and tell the world about the weather.