Was US House Speaker's 'Podium' Listed on eBay?

The listing occurred after an unidentified man was pictured carrying such an object in the Capitol. 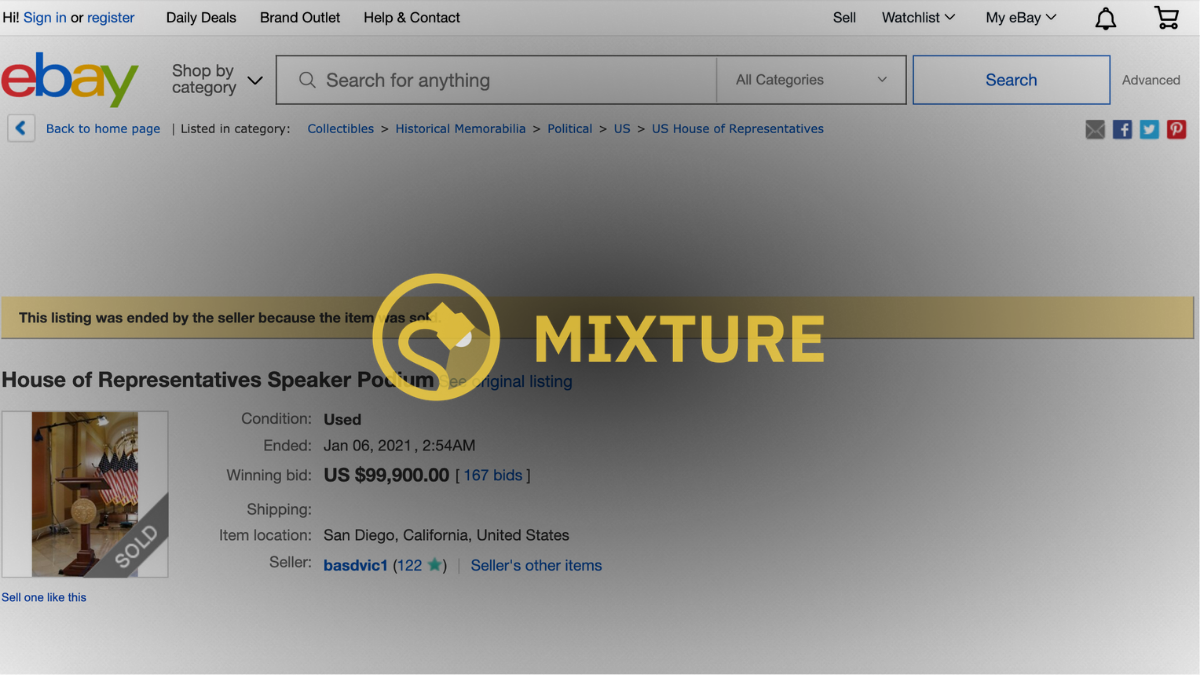 Claim:
Following the Jan. 6, 2021, insurrection at the U.S. Capitol, a listing on the auction site eBay was created for the “House of Representatives Speaker Podium.”
Rating:

It is true that at least one eBay auction listed a so-called “House of Representatives Speaker Podium.”

However, it remains unknown whether the item listed was the actual podium (or lectern) from the U.S. House, or even if it left the building during riots.

In the aftermath of the Jan. 6, 2021, insurrection at the U.S. Capitol in the District of Columbia, crews began clearing debris and cleaning vandalism in the centuries-old congressional building. And while broken glass was cleared from the marble floors, an unknown eBay user reportedly listed the podium for the U.S. House of Representatives speaker for auction on the online platform.

The listing was posted on Reddit shortly after the attack on the Capitol after a widely circulated photograph showed a rioter and supposed Trump supporter carrying off the lectern (not podium) of the House. While the picture is genuine, an earlier Snopes report concluded that details about it were scarce — including who the person was, where the lectern came from, or whether the person was able to leave the building with it.

It was also unclear if the lectern was in fact sold on eBay. An earlier version of the listing shared to Reddit offered free shipping with an estimated delivery date between Jan. 27 and Jan. 29. In an email to Snopes, eBay spokesperson Ashley Settle confirmed that any such listings were "being removed and ended." Though the listing in question had been deleted at the time of writing, the paged had been archived for reference. Although the auction ended on Jan. 6, 2021, it appeared to have received 167 offers that culminated in a winning bid of $99,900. A deeper look revealed that the seller, basdvic1, had been an eBay member since November 2012 and had received 10 positive reviews. Snopes attempted to contact the lister but did not receive a response at the time of publication.

That being said, it is possible that the listing and sale of the object was made as a joke. A reverse-image search of the photograph used in the eBay listing showed that it was taken on Sept. 24, 2019, when House Speaker Nancy Pelosi announced the formal impeachment inquiry of U.S. President Donald Trump following allegations that the president sought to pressure the president of Ukraine to investigate his Democratic opponent, former Vice President Joe Biden and his son, Hunter Biden. The impeachment proceedings and subsequent charges of abuse of power and obstruction were the results of a whistle-blower complaint that the Trump administration had withheld from Congress.

So, while it appeared that the listing of the object was genuine, it is unclear whether the actual congressional item was sold, or if it had ever left the Capitol to begin with.