Is Putting Hotel Luggage in the Bathtub Upon Arrival a Good Idea?

Online advertisements promised what appeared to be a handy travel tip. 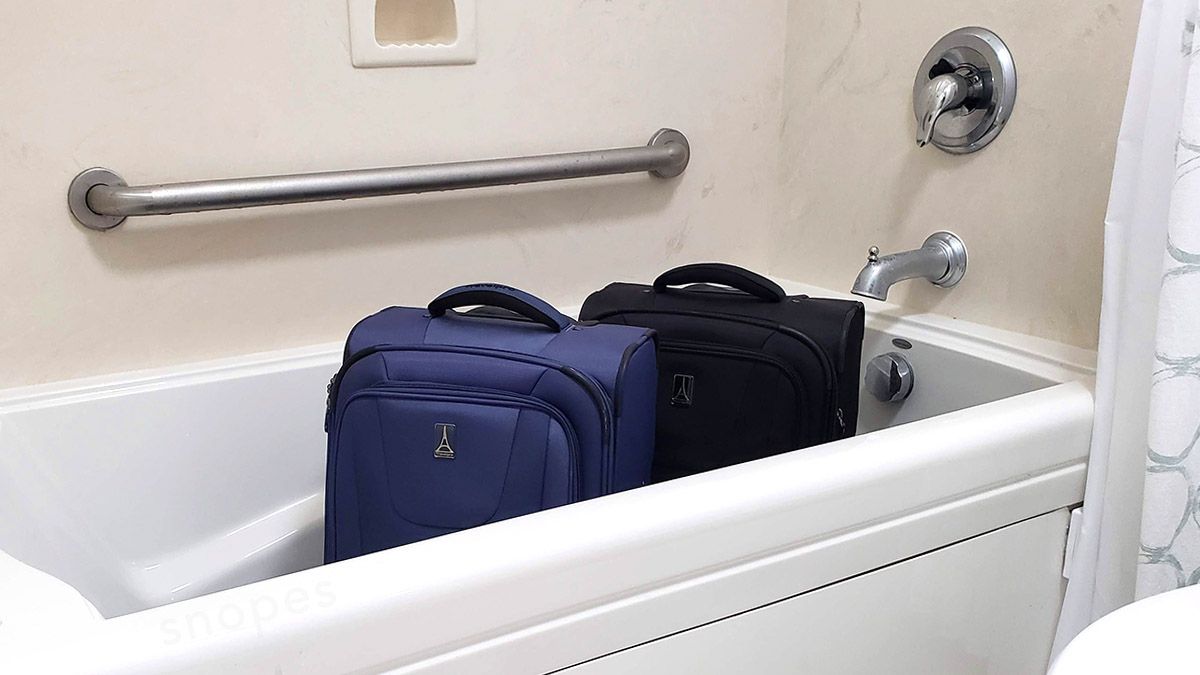 Claim:
Placing luggage in a hotel room's bathtub has a legitimate purpose.
Rating:

Since at least August 2021, online advertisements have displayed a photograph of a purported hotel trick regarding placing luggage in the bathtub. The ads appeared to promise to explain why suitcases would need to go in such a seemingly odd spot. For example, this ad appeared next to an article on the 10news.com website. It read: "Hotel Tricks: Luggage Goes in the Bathtub ASAP."

This ad was hosted by what is known as the Outbrain advertising network.

We clicked the ad. It led to a lengthy slideshow article on the Definition.org website about supposed "hacks" for hotel rooms. The headline read: "The Ingenious Hotel Hacks You Need To Pack In Your Bag."

The story never ended up mentioning anything about placing luggage in a hotel room's bathtub. We clicked through 30 pages of nonsense so our readers wouldn't have to. It was nothing but clickbait, just like another ad we reported about that involved an empty toilet paper roll.

While the 30-page article mentioned nothing about luggage in a hotel bathtub, a little bit of research led us to find out that it can have a legitimate purpose.

Educators at Penn State University, Texas A&M AgriLife Extension, and The University of Maine, all recommend placing luggage in the bathtub when checking into a hotel room. Some suggest it's also fine to temporarily leave the suitcases in the hallway.

The reason given is simple: bedbugs.

The experts on bedbugs that appear in videos like these don't necessarily recommend that all hotel guests always put their luggage in the bathtub. Rather, if guests are fearful of bedbugs, it's a safe place to store suitcases, purses, and other belongings, while they search the room for pests. An infestation can prove to be quite the costly situation.

The chances of a hotel room having bedbugs is small, just like the size of the creatures. According to Jody Gangloff-Kaufmann, an urban entomologist at Cornell University, "public awareness skyrocketed" to levels beyond the actual chances of experiencing a bedbug infestation. This appeared to be due to a surge in news reports, which perhaps made the issue look like a larger problem than it actually is. Gangloff-Kaufmann was cited in a 2013 story from National Geographic.

The unsanitary nature of placing suitcase wheels in a place where people are meant to bathe themselves may not sound like a good idea. However, fearful hotel guests can simply bring a large trash bag when they travel, so they can lay it down in the tub to keep the surface clean for several minutes. Many brands of trash bags can be torn open on both sides to completely open the plastic, resulting in a longer plastic surface for the bathtub. Once guests have checked the room for bedbugs, including all around the bedding, mattress, box spring, and frame, as well as under and around the straps on luggage racks, it's recommended to place the suitcases directly on the rack. It is not recommended to keep suitcases on the floor or the bed. Multiple pest control articles have mentioned that placing luggage on the hotel room's floor or directly on the bed could result in bringing home a bedbug infestation, however minuscule the chances of such a thing might be.

The idea of placing luggage in a bathtub wasn't the first time we saw what, at first, appeared to be odd hotel "hacks" and "tricks." For example, an ad claimed that there was some grand reason why hotel guests should "always" put coins in the bathroom sink. We also reported on an ad that purportedly revealed an important tip on why guests should "always" put a towel under their hotel door.

For a full rundown of how to check for bedbugs upon arrival to a hotel room, check out a full guide from BobVila.com.

Note: The bed bug photograph is credited to AJC1 on Flickr.