This story has circulated in various forms since at least the 1960s. 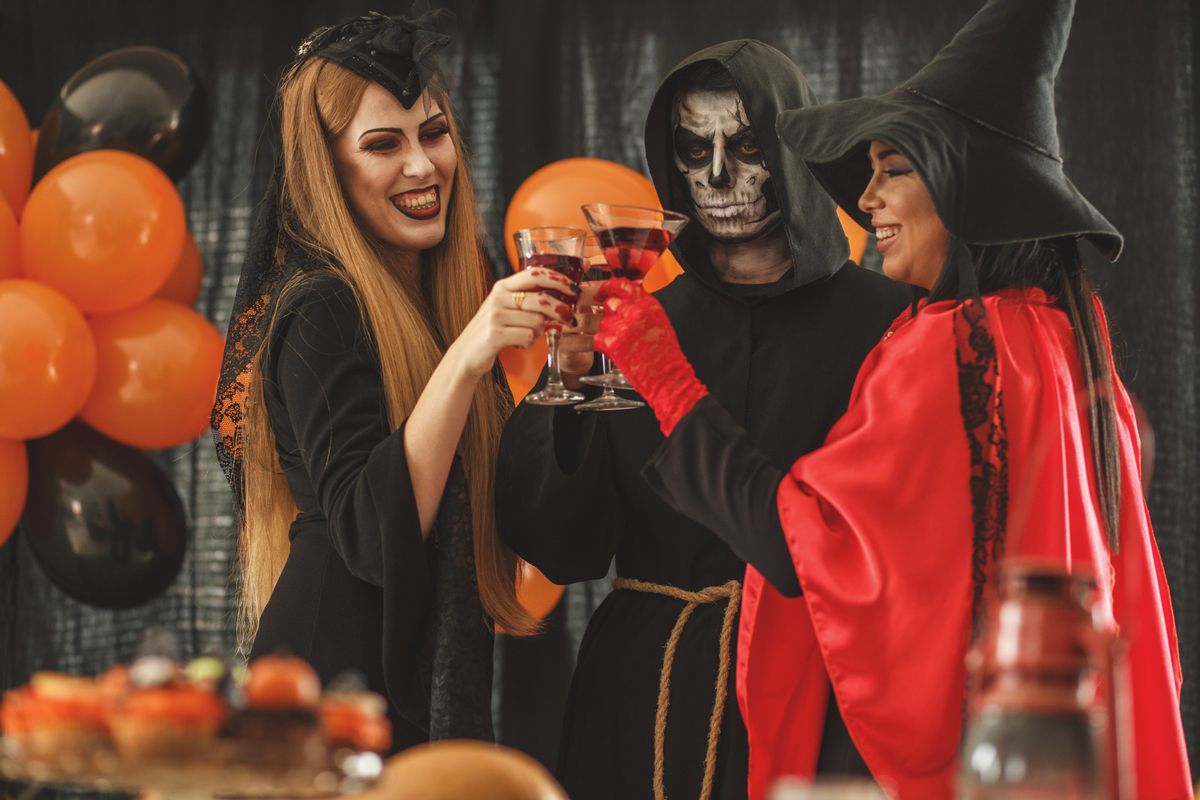 Friends are having costume party for Halloween. They are wearing vampire's, grim reaper's and witch's costume and celebrating. (Image Via Getty Images)

Claim:
A woman seduces her husband at Halloween party and then finds out he switched costumes with someone else.
Rating:

No matter how many times this joke-cum-legend is passed off as a recent tale, nothing will change the fact that it's at least 40 years old. A 1988 issue of Reader's Digest published:

On the night of the masked ball, a woman developed a migraine and told her husband to go alone. Later she felt better, so she got into her costume, which her husband had never seen. When she arrived and saw her spouse prancing around with one woman after another, she decided to get even.

Seductively, she whispered sweet nothings in his ear and after a long embrace lured him to the garden. Just before midnight, when everyone was to unmask, the woman slipped away and returned home. Her husband didn’t arrive until 3 A.M.

'How was the party?' she asked.

'Did you dance much?'

'To tell the truth,” her husband replied, when I got there I saw that Pete, Bill and Fred were stag, too, so we went into the den and played poker.'

'You played cards all night?' she shrieked.

'Yeah,' he told her. 'I gave my costume to Charlie. He said he had the time of his life.'

A 1965 joke book included a version involving a headachy wife who slips out of a costume party, switches outfits at home, then returns to the country club dance where she’d left her husband. She spots a figure wearing her husband’s costume, and a bit of dancing and wickedly persuasive moonlight leads to her romancing its wearer in the back seat of a parked car. They part, and (as in all other versions of this tale), she arrives home before her husband does. When she asks her hubby how his night was, his description of the evening has him trading places with the bartender, a dour fellow who had previously complained about never having the opportunity to get in on the usual ribald Halloween party fun.

This legend is a neat reverse twist on the typical mistaken-identity legend in which an unsuspecting individual — either through the manipulation of others or his own lustful excesses — ends up in bed with the wrong partner. In this particular tale, however, a suspicious wife attempts to maneuver her husband away from other women and into her own bed, but her mistrust of her spouse is unfounded, and she is the one who ends up with the wrong partner. Much like the "Birthday Suited" legend, a spouse who unfairly underestimates his or her partner is placed in an embarrassing and awkward position as a result.

Proof that you can’t keep a good story down are recent appearances of this tale told as true, first-person accounts. The following comes from a 1998 issue of Cosmopolitan magazine:

One night, my date and I were at a costume party. He dressed up as the Phantom of the Opera, and I went as a devil. During the party, I saw him go to the bedroom with another woman. When I saw him leave the bedroom to go to the bathroom, I went to the bedroom, told the woman my situation, and took her place. Since the room was dark, my date was not aware of the change, and we ended up having sex. While we were having sex, he started screaming the other woman’s name. When I heard this, I smacked him. After he flipped on the lights, I found out that I had been with the wrong Phantom!

This version, which adds a touch of incest to the mix, was published in Playboy magazine in 2004:

A married couple was invited to a masked Halloween ball. On the night of the party, the wife had a headache and told her husband to go to the event alone.

Reluctantly, he agreed. He put on a bear costume and left. The wife fell asleep and woke up an hour later feeling great. She decided to go to the party after all, and it occurred to her that, since her husband didn’t know what costume she was wearing, she’d be able to see how he behaved when she wasn’t around. As soon as she arrived, she spotted her husband in his bear costume flirting with every woman in sight. She approached him, and after a few drinks he propositioned her. They went into the bathroom and had sex. Just before unmasking at midnight, the wife slipped away and went home. She was sitting up in bed when her husband returned. She asked about his night. He said, 'Oh, it was the same old thing. You know I never have a good time when you’re not there.'

'Really?' she said. 'You didn’t meet anyone interesting?'

He replied, 'I didn’t talk to anyone new. When I got there, I saw the guys and we went into the spare room and played poker all night.'

She said, 'You must have looked really silly wearing your bear costume playing poker.'

Her husband replied, 'Actually, I gave my costume to my dad. He apparently had the night of his life.'

The story was also told in:

Holt, David and Bill Mooney.   Spiders in the Hairdo.

This article was updated to meet Snopes' current formatting standards on Oct. 6, 2022.