Why Do We Wear Costumes on Halloween?

The history behind why you endure “sexy Freddy Krueger” outfits each October. 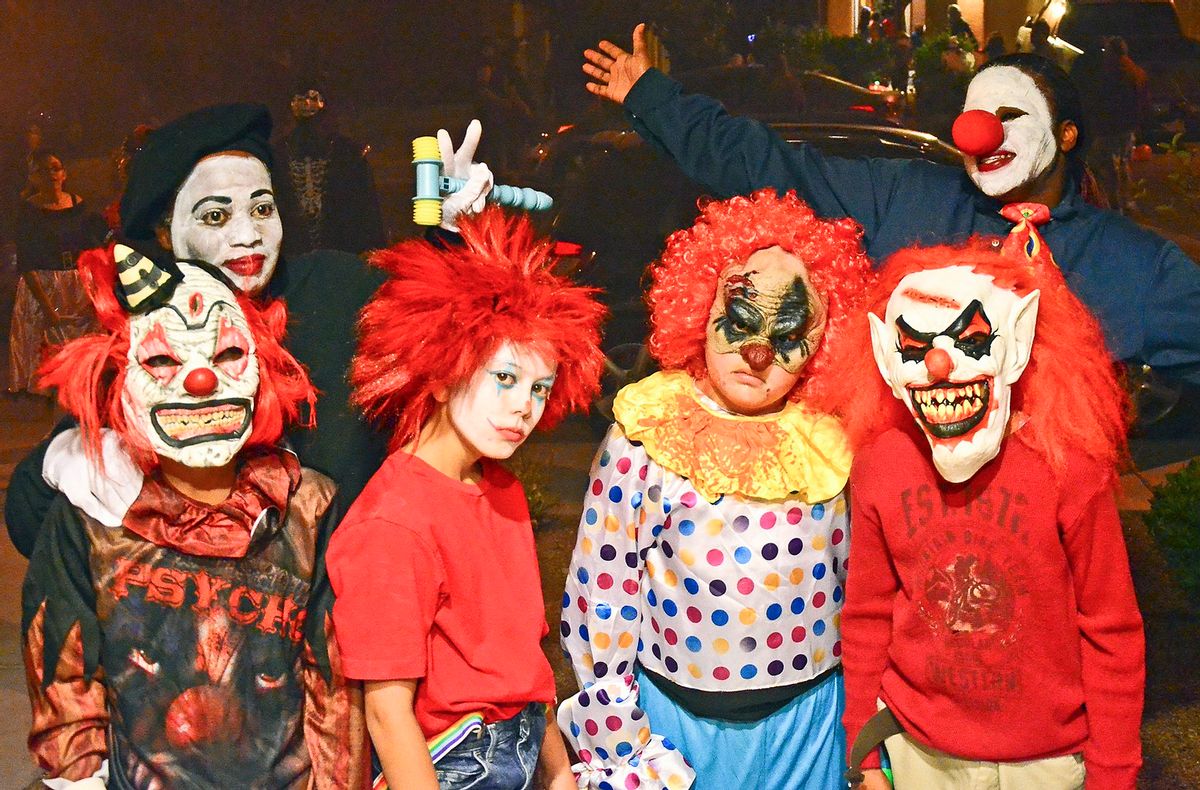 Halloween arrives every year on Oct. 31, and its roots of traditions are debated widely. We’ve previously covered the odd array of Halloween costumes one encounters every year on this festive occasion, including the “Karen” and even controversial ones influenced by “The Handmaid’s Tale.”

But why do we have to endure such costumes every year? Where did this practice originate? Some say the festival has its origins in pre-Christian traditions that mark the changing of the seasons. The ancient Celtic festival of Samhain, which was also a pagan religious tradition that welcomed the end of summer harvest, and the changing of seasons.

According to the Library of Congress, “Celtic people believed that during the festival, spirits walked the Earth. Later on, Christian missionaries introduced All Souls’ Day on November 2, which perpetuated the idea of the living coming into contact with the dead around the same time of year.”

The Celts reportedly believed that around this time of the year, the veil between the living and the dead was thinner, and spirits could walk the earth. This is where the costumes came in, worn as disguises by festival-goers so they could “avoid being terrorized by all the evil spirits walking the Earth during Samhain.”  According to History.com:

In addition to causing trouble and damaging crops, Celts thought that the presence of the otherworldly spirits made it easier for the Druids, or Celtic priests, to make predictions about the future. For a people entirely dependent on the volatile natural world, these prophecies were an important source of comfort during the long, dark winter.

According to writer Lesley Bannatyne, people opted for more serious and scary costumes so that wandering spirits would mistake them for one of their own and leave them be. The Celts typically wore animal heads and skins. When Christians adopted the festival and reframed it to fit with their traditions, the costumes practice apparently stayed on in the British Isles.

"Hiding behind their costumes, villagers often played pranks on one another, but blamed the spirits," Bannatyne told CNN. "Masks and cover-ups came to be seen as means to get away with things. That's continued throughout Halloween's evolution."

When Irish and Scottish immigrants moved to the land that would become the United States, they reportedly brought these practices with them. According to fashion historian Nancy Deihl: "People in rural America really embraced its pagan roots, and the idea of it as a dark occasion, centered around death. They wore scary, frightening get-ups, which were made at home with whatever was on hand: sheets, makeup, improvised masks. Anonymity was a big part of the costumes," she added. "The whole point of dressing up was to be completely in disguise."

However, other scholars disagree with these accounts of the origins of Halloween, in part because so little is actually known about the Celtic fesitval of Samhain. Steve Roud wrote in his book, "The English Year," that this was "the most widely misunderstood and misrepresented day in the festival year." He notes, "so many now believe that it was originally a pagan festival of the dead that this belief is virtually impossible to shake. The facts, however, are very different, and are far more elusive and complex." Roud writes:

Hallowe’en’ means the Eve of Hallowtide (1 and 2 November), which was indeed designated as a time to commemorate the dead, but it was a Christian festival inaugurated in the medieval period. There is no evidence that this time of year was celebrated in England before the Christian feast was created. In Ireland, 1 November was ‘Samhain’, the beginning of winter and of the year, and as such it was an important day of gathering and feasting, but not, it seems, of much religious or supernatural significance. Nor is there any evidence of the supernatural at Hallowe’en in early Welsh or Scottish material, except where Irish influence was strong.
[...]
The modern Hallowe’en developed from the two closely linked Christian festivals of All Saints (1 November) and All Souls (2 November), which were both concerned in their way with the dead. The festival of All Saints, known in English as All-Hallows or Hallowmas (‘hallow’ from the Old English word for ‘holy man’ or ‘saint’), was instituted to commemorate all the Christian saints and martyrs, known and unknown, who had been instrumental in forming and perpetuating the faith.
[...]
The feast of All Souls, on 2 November, was added somewhat later, about the year 1000, and was created to commemorate the faithful departed who had gone before. For centuries there had been debate within the Church about whether Christian souls went straight to Heaven or were detained somewhere to undergo painful purgation to prepare them for eternal bliss; a particular problem was what happened to those who died suddenly without final rites, or who had no time to make proper preparation.

Roud elaborated on the practices that may have been continued from medieval times, "the house-visiting custom called souling, reported in the nineteenth century, and the lighting of fires on Hallowe’en."

Similarly, historian Beth Allison Barr argued that the origins of Halloween were mostly Christian rather than pagan. She referenced Nicholas Rogers, author of “Halloween: From Pagan Ritual to Party Night" who wrote: “If Samhain imparted to Halloween a supernatural charge and an intrinsic liminality, it did not offer much in the way of actual ritual practices, save in its fire rites. Most of these developed in conjunction with the medieval holy days of All Souls’ and All Saints’ day.”

Roud noted that the germs of modern Halloween were visible by the mid-20th century, where records from the time spoke of children wearing costumes and visiting homes. By the 1970s and '80s, due to the spread of American popular culture, English children began dressing up as witches and ghosts. Costumes, he argues, were a later invention in England, but earlier incidents of costume parties were reported:

Hallowe’en parties, with guests dressed as witches and fiends, have been growing in popularity since the 1980s and although they too appear at first glance to have been influenced by American popular culture, they have, in fact, been around for a bit longer than that. In Nella Last’s wartime diary, for example, she reflected on pre-war family occasions, and recorded for posterity the details of a family Hallowe’en party, presumably in the 1920s or early 1930s.

The 1920s and 1930s did see the practice become more commercialized in the United States, especially due to its timing between summer and Christmas: "It was a way to come together before the turning of the season," Deihl told CNN. "Marketers played heavily on that as Halloween became more commercialized."

Around this time, costumes influenced by popular culture became more common, after companies like the J. Halpern Company (or Halco) began licensing the images of popular characters like Popeye, Mickey Mouse, Olive Oyl, to make into costumes and sell.

Historian Ronald Hutton argued that the practice of wearing costumes to ward off spirits was a possibility, but one that we cannot confirm. In a piece for the Guardian, he wrote that "we have virtually no idea" what rites were marked on "Samhain" or any other name that festival was known by in ancient times, because "northern European pagans were illiterate, and no record remains of their ceremonies."

However, he did "reconstruct" some of the practices of the festival "from those which continued to hang about it in the Middle Ages, and from folk customs attached to it, so widespread that they must refer to a generally shared set of ancient attitudes." Christianity was the dominant movement during the Middle Ages. Hutton writes:

What was coming was the season of death; not just of leaves, flowers and light, but of humans, as more would perish in the winter and early spring than at any other time of year. That was why Halloween was widely regarded as the time when the spirits of darkness and fear, the evil and malevolent forces of nature, were let loose upon the earth.

People reacted to this forbidding prospect in two different ways. One was to make it the festival of divination par excellence, in which humans most frequently tried to predict the future: and in pre-modern times the prediction most often sought was who would live through the winter. The other reaction was to mock darkness and fear, by singing songs about the spirits which personified it (in Wales, for example, the tail-less black sow and the White Lady), or dressing up as them: in other words, to confront boldly the terrors of the season now arriving.

The origins of Halloween has its roots in very old European customs, possibly pagan and likely Christian. At some point, someone decided that everyone is going to dress up in weird outfits for religious reasons, and now we have to endure "Sexy Freddy Krueger" every year.

Roud, Stephen. The English Year : A Month-by-Month Guide to the Nation’s Customs and Festivals, from May Day to Mischief Night. Penguin, 2006, https://archive.org/details/englishyearmonth0000roud/page/442/mode/2up?q=%22guests+dressed+as+witches%22. Accessed 30 Sept. 2022.