Did Gas Prices Rise to $6.99 in Lancaster, California?

One small clue in this viral picture showed the reality behind it. 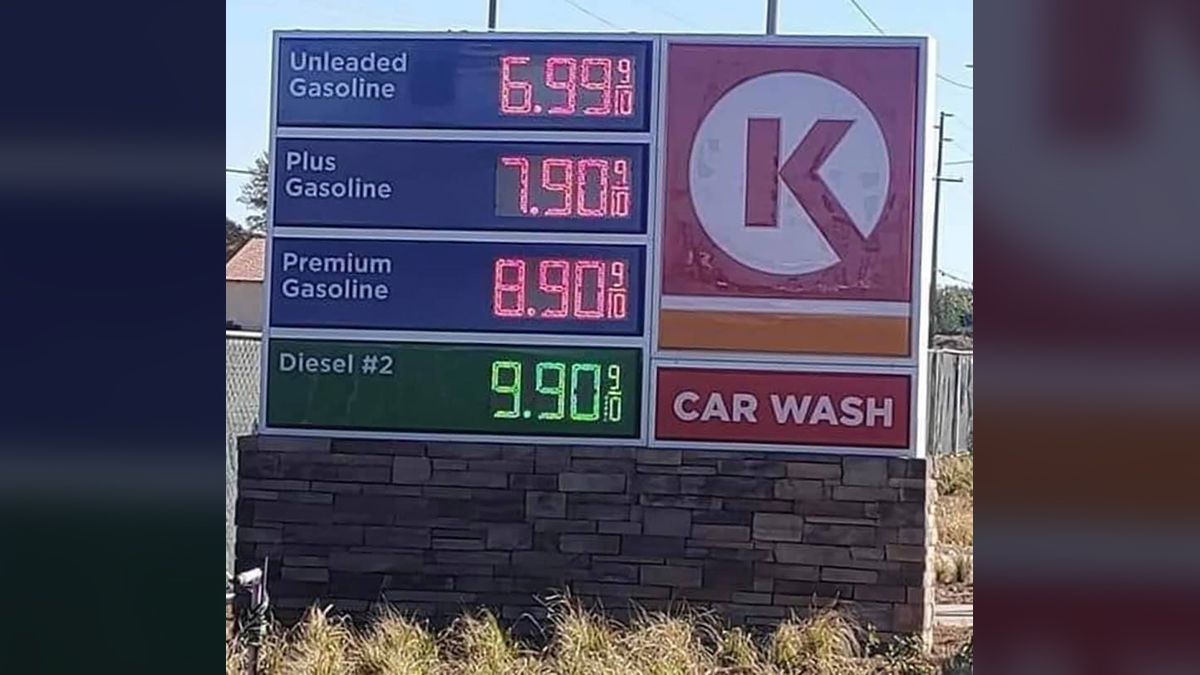 Gas prices at a Circle K in East Lancaster California were not as shown because the gas station had not yet opened.

The picture that showed gas prices at a Circle K in Lancaster, California, was real. However, the gas station was surrounded by a construction fence and was not yet open to the public, and the fence was cropped out in some social posts. Further, there is no evidence that the displayed prices were anything more than placeholder numbers — two other nearby Circle K locations had much lower average gas and diesel prices.

On Nov. 7, 2021, a Facebook user posted a picture of a Circle K gas station in Lancaster, California, with a purported $6.99 per gallon price tag for unleaded fuel. According to the sign, plus gasoline was $7.90, premium fuel was $8.90, and diesel was $9.90. It was captioned: "Location: East Lancaster, Antelope Valley, California."

However, not only did we find a clue that debunked the many posts and tweets that shared the photograph, but also, the prices displayed were nowhere near the California average per gallon.

The photograph was shared on Facebook more than 34,000 times in 10 days. One comment that received more than 300 likes wrote: "Bring back Trump and the Pipeline NOW." The picture was also re-shared by Wanda Freeman Barzizza, the wife of a formal mayoral candidate for the city of Germantown, Tennessee. She has close to 10,000 followers. It was captioned with "LETS GO BRANDON," a chant that's intended as a joke at the expense of U.S. President Joe Biden.

On Nov. 12, a cropped version of the same Lancaster, California, gas prices photograph was tweeted by musician Kaya Jones. She is a supporter of former U.S. President Donald Trump. At the time, she had more than 384,000 followers on Twitter. Her tweet was also retweeted by John O'Hurley, an actor who is perhaps best known for his role as J. Peterman on "Seinfeld." In reality, the Circle K sign showed a gas station in Lancaster, California, that had not yet opened to the public. Fencing can be seen on the left and right sides of the un-cropped picture. The person who shot the viral photograph appeared to have held a camera over or through a fence to capture the sign. A perimeter fence is visible in the picture.

We found two tweets that pointed out the fact that the Circle K gas station hadn't yet opened in Lancaster. First, @RoulletteTravis noted that the average for the area was around $4.50 per gallon for unleaded fuel: Another Twitter user posited a different potential explanation for the high prices on the sign at the fenced-in gas station: Now we turn to the subject of the "let's go Brandon" chant and other misguided political commentary attached to the discussion of the misleading gas prices picture.

On May 26, 2021, The Associated Press reported that the fall of fuel costs in 2020 had nothing to do with the policies of the Trump administration. Instead, the dip in prices had everything to do with the COVID-19 pandemic, while the rise in prices in 2021 ran parallel to an "unexpected bounce-back in demand."

In sum, social media posts that showed a viral picture of gas prices at a Circle K in Lancaster, California, failed to mention the fact that the location had not yet opened and was surrounded by a fence. There's no evidence that the gas station was preparing to open with the same extremely high prices. Further, gas prices in 2020 and 2021 were not the result of Trump's or Biden's policies.