Unbelievable rumors about students identifying as cats have unfortunately proved believable to some audiences. 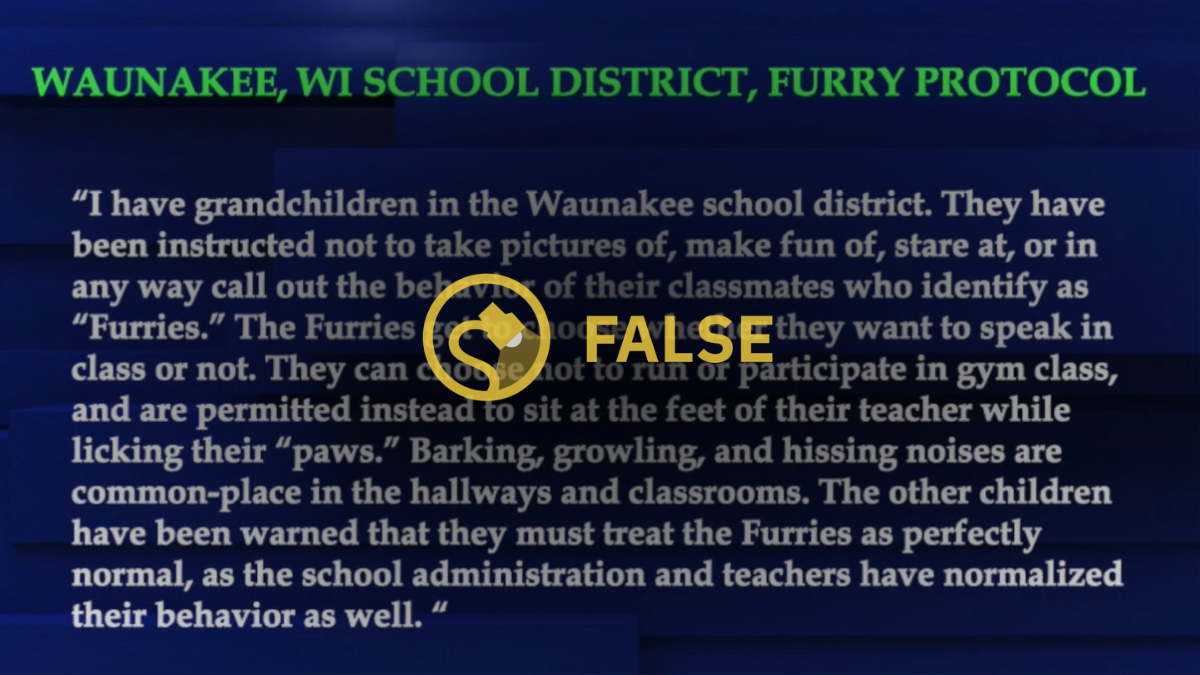 Claim:
A Wisconsin school district has a set of "furry protocols" that allows students to identify as cats.
Rating:

In April 2022, a false rumor about a school district in Wisconsin implementing a set of "furry protocols" in order to deal with a rash of students who were "identifying as cats" was presented as genuine news on a conservative podcast. A video of Wisconsin talk radio host Vicki McKenna's appearance on the Dr. Duke Show, a podcast hosted by Dr. Duke Pesta, racked up more than 100,000 views as it circulated on social media:

There's no truth to this rumor. The Waunakee school district has not seen a wave of students identifying as cats, and they did not enforce any "furry protocols" in order to deal with these alleged students.

Randy Guttenberg, the superintendent of the Waunakee school district, told the Wisconsin news outlet Isthmus.com: “I am aware of the misinformation that is circulating on social media. The Waunakee Community School District does not have protocols for furries, nor do we have an issue with disruptions in our school and classrooms.”

The "furry protocol" rumor is the newest wrinkle in a series of false claims concerning absurd behavior in schools. In January 2022, for example, unfounded rumors were circulated on social media claiming that a school in Michigan had installed litter boxes in order to appease students who had started identifying as cats. The rumor about litter boxes gained enough traction that it was even mentioned during a March 2022 debate between state lawmakers in Nebraska.

Sen. Bruce Bostleman would later apologize for falsely claiming that students were meowing, identifying as cats, and going to the bathroom in litter boxes. NBC News reported:

A Nebraska state lawmaker apologized on Monday after he publicly cited a persistent but debunked rumor alleging that schools are placing litter boxes in school bathrooms to accommodate children who self-identify as cats.

“They meow and they bark and they interact with their teachers in this fashion,” Bostelman said during legislative debate. “And now schools are wanting to put litter boxes in the schools for these children to use. How is this sanitary?”

The claim that the Waunakee school district had implemented furry protocols appears to have originated with an email sent to Pesta. In the days before McKenna appeared on Peta's podcast, Pesta gave a few presentations that mentioned this alleged email. A photograph from one of those presentations went viral on social media: While we're not sure exactly when or where this photograph was taken, we did find a video of Pesta using this same slide at a presentation in Hartland, Wisconsin on March 31, 2022, called "American Public Schools: From Failure to Fascism." This event was sponsored by No Left Turn In Education, a group Media Matters describes as an anti-critical race theory group, and presented by the FreedomProject Academy, an online academy founded by the right-wing political advocacy group the John Birch Society.

Interestingly, Pesta follows the slide about "furry protocols" with another false rumor about a teacher being fired for protesting against the installation of litterboxes at schools in Michigan for students who identified as cats. While Pesta claims that this woman was fired, she was not fired. Furthermore, there's no evidence that any schools in Michigan installed litterboxes for their students.

Midland Public Schools Superintendent Michael Sharrow said: “There is no truth whatsoever to this false statement/accusation! There have never been litter boxes within MPS schools.”

It's also worth noting that while McKenna claimed on Pesta's podcast that she had received multiple emails about these furry protocols, the email she presents is the same email Pesta has been showcasing during his presentations.

The claim that a Wisconsin school district implemented furry protocols in order to deal with a wave of students identifying as cats is based almost entirely on one alleged email said to have been sent from a third-party (an anonymous student's grandmother) to a podcast host. No actual evidence has been presented to support the claim. There are no photos or videos documenting such behavior. No teachers have come forward to talk about the supposed protocols, and no students or parents have corroborated any of these claims. Lastly, the superintendent of the school district has dismissed the rumors as misinformation.

“Fact Check: Was Teacher Fired for Not Meowing Back at Student Who ‘Identifies as Cat’?” Newsweek, 25 Jan. 2022, https://www.newsweek.com/fact-check-was-teacher-fired-not-meowing-back-student-who-identifies-cat-1672597.