Did Dr. Seuss Say 'Life Is Too Short' To Wake Up with Regrets?

“Nobody said life would be easy, they just promised it would be worth it,” Seuss supposedly wrote. 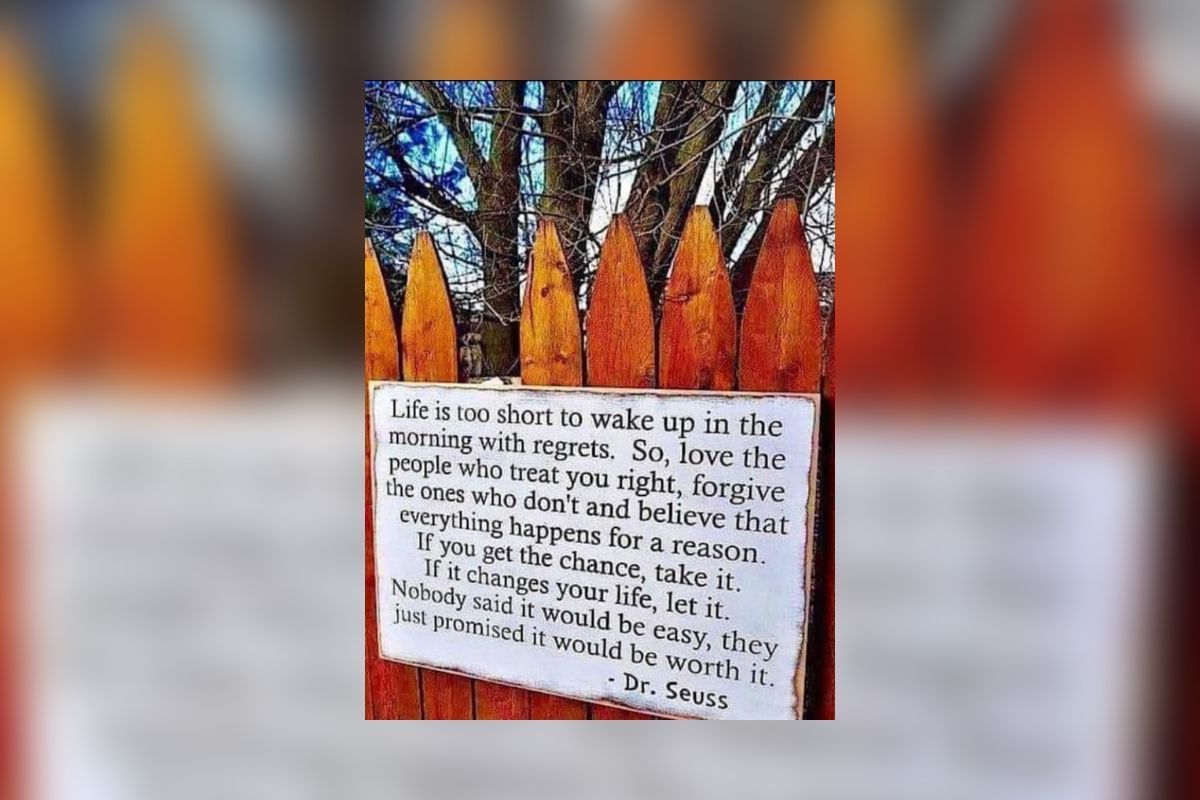 Claim:
Children's book author and illustrator Dr. Seuss wrote a passage that begins, "Life is too short to wake up in the morning with regrets," and ends, "Nobody said it would be easy, they just promised it would be worth it."
Rating:

For years, a popular quote that was meant to serve as an inspiration for well-being circulated online via social media, news publications, and decorative products on e-commerce websites (such as Amazon), and many of those sources attributed the passage to children's book author and illustrator Dr. Seuss.

But here’s the issue: There’s no proof that Dr. Seuss ever said or wrote the words attributed to him in the text, which reads in its entirety:

Life is too short to wake up in the morning with regrets, so love the people who treat you right, forget about the ones who don't, and believe that everything happens for a reason. If you get a chance, take it. If it changes your life, let it. Nobody said life would be easy, they just promised it would be worth it.

Despite its frequent attribution to Dr. Seuss, Snopes was not able to ascertain if he was indeed the quote's source, or where the words were first uttered or published. We contacted the Dr. Seuss Foundation in hopes of verifying the claim and will update this article accordingly.

While trying to determine how long the quote had been attached to the "Green Eggs and Ham" author, Snopes found a 2018 Facebook post featuring a photograph that appeared to show a sign with the quote on a fence. About four years later, on July 10, 2022, a Facebook user shared what appeared to be a color-saturated version of that same picture, generating thousands of "likes" and "shares."

In fact, a reverse image search of the above picture turned up more than a dozen similar social media posts on sites like Imgur and Etsy — but none of the websites included further information on the photograph.

A search for the origins of the quote also uncovered several websites, including Good Reads and Quotespedia, that attributed the message to someone else -- namely, Harvey Mackay, an inspirational author. But Snopes contacted the Harvey Mackay Academy and we were told that while Mackay may have used the quote in a speech or in some other form, he was not its original author. (As we have previously reported, just because a quote is attributed to a particular well-known person on a website or in a social media post does not mean that that person really said or wrote it.)

Our team was able to find a tweet dating back to 2014 that contained the quote in-question that was shared to the social media platform by Brazilian lyricist Paul Coelho, in which he appears to take credit for the quote in question. We contacted Coelho for further clarification and were told by his agency, Sant Jordi Asociados, that he was not the author of the quote.

As such, we have rated this claim as “Unproven." If, or when, evidence surfaces to determine the original source of the popular quote, we will update this rating.

“Life Is Too Short To Wake Up In The Morning With Regrets.” Ø Eminently Quotable - Quotes - Funny Sayings - Inspiration - Quotations ø, 23 Feb. 2021, https://www.eminentlyquotable.com/life-is-too-short-to-wake-up-in-the-morning-with-regrets/.

quotespedia.org. Life Is Too Short to Wake up with Regrets. So Love the People Who Treat You Right. - Harvey Mackay - Quotespedia.Org. https://www.quotespedia.org/authors/h/harvey-mackay/life-is-too-short-to-wake-up-with-regrets-so-love-the-people-who-treat-you-right-harvey-mackay/. Accessed 13 July 2022.