Was a Dinosaur Mummy Dubbed ‘Appalachiosaurus’ Found in Tennessee?

It was called the “best preserved dinosaur specimen ever discovered." 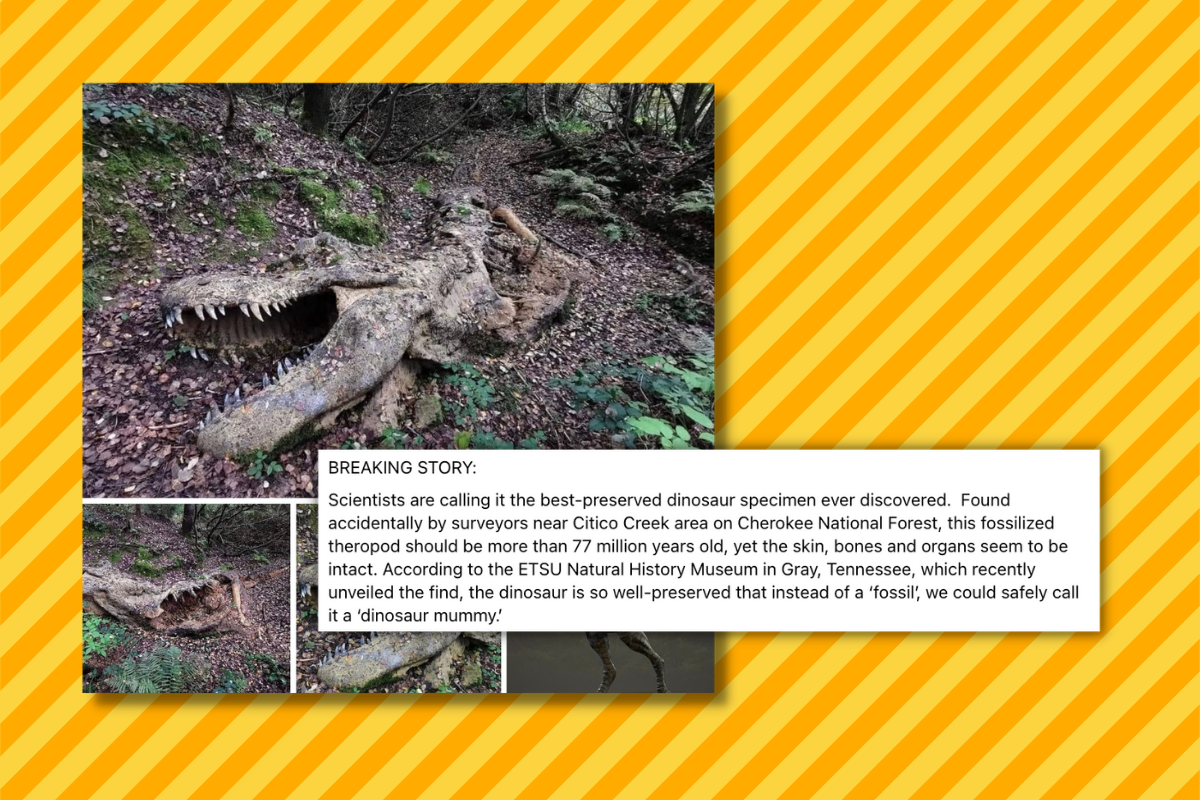 Claim:
In April 2021, a mummified dinosaur specimen was discovered in Tennessee.
Rating:

While the dinosaur featured in the April 2022 Facebook post was a joke, we discovered that the claims made within it are very much sourced in legitimate paleontological discoveries. More on that below.

A social media post claiming to have described the discovery of a mummified dinosaur found in Tennessee — and so-named the “Appalachiosaurus” — is a dud. Spoiler alert: the post was shared to Facebook on April 1, 2022. (As if a 77-million-year-old carcass neatly placed on the ground wasn't enough of a dead giveaway.)

While the dinosaur featured in the Facebook post was a joke, we discovered that the claims made within it are very much sourced in legitimate paleontological discoveries. More on that below.

But before diving into the fossil record, a quick look at the April Fools' joke post that, as of this writing, had been shared more than 104,000 times: It was shared to the Facebook group Growing Up In East Tennessee with three photos of what appeared to be a “dinosaur mummy,” along with another image that looked to be a digital reconstruction. Along with the photos was the following description:

Scientists are calling it the best-preserved dinosaur specimen ever discovered. Found accidentally by surveyors near Citico Creek area on Cherokee National Forest, this fossilized theropod should be more than 77 million years old, yet the skin, bones and organs seem to be intact. According to the ETSU Natural History Museum in Gray, Tennessee, which recently unveiled the find, the dinosaur is so well-preserved that instead of a ‘fossil’, we could safely call it a ‘dinosaur mummy.’

The researchers examining the find were astounded at its nearly unprecedented level of preservation. The creature’s skin, teeth, and even some of its guts were intact – something they’d never seen before.

“You don’t need to use much imagination to reconstruct it; if you just squint your eyes a bit, you could almost believe it was sleeping,” one researcher said.

Although how the dinosaur mummy could remain so intact for so long remains somewhat of a mystery, researchers suggest that the theropod may have been swept away by a flooded river and carried out to an ancient sea, where it eventually sank to the now exposed ocean floor.

Now believed to be identified as Appalachiosaurus, conservation experts are looking into coding it's DNA. Dr. James Harvin states, "Knowing this animal once roamed this area, we will be putting all effort possible into restoring the species. We hope to reintroduce it into its ancient stomping grounds".

In a pinned post to the Facebook group, Dusty Worley, who originally posted the “Appalachiosaurus” prank, apologized to the group, adding that it was a fake post made for April Fool’s day.

Though the post was made in jest, such a claim isn’t that far of a stretch from the truth.

Digitally Digging for the Real Appalachiosaurus and the Mummified Dinosaur

A reverse image search of the supposed photographs did not return any notable results. To determine whether they were staged or digitally altered, we contacted Worley, who confirmed that the images were taken from DinoMuseum Altmühltal, a dinosaur museum in Denkendorf, Germany.

“Appalachiosaurus is a tyrannosauroid from the Late Cretaceous. It’s known from fragmentary remains from the Demopolis Chalk formation is what is now Alabama. Material assigned to Appalachiosaurus has also been found in the Carolinas,” wrote Raggo.

A. montgomeriensis based on photos and diagrams of the known remains. Public Domain

A Google search led us to the Australian Museum, which has a page dedicated to the real Appalachiosaurus montgomeriensis.

“The genus name Appalachiosaurus means 'lizard from Appalachia', in reference to the mountain region where the fossils were found. Montgomeri honours Alabama's Montgomery County and ensis is the Latin suffix meaning 'from',” wrote the museum.

“Appalachiosaurus montgomeriensis is the first and most complete tyrannosaur known from the eastern USA. It is smaller than its relatives Albertosaurus and Gorgosaurus.”

The original specimen was found in 1982 in marine sediments, mainly chalk, and encapsulated with fine clay and marine plankton that led researchers to believe the dinosaur died on land and was washed out to sea where it rested some 300 feet below the surface of the ocean.

But it wasn’t until 2005 that paleontologists with Auburn University determined the fossilized remains represented a new genus and species of tyrannosaur. A. montgomeriensis was subsequently described in the peer-reviewed Journal of Vertebrate Paleontology, which was authored by, among others, David Schwimmer (no, not that David Schwimmer).

Though the only known specimen was a juvenile just two-thirds grown, it is thought that the dinosaur could grow up to 26 feet in adulthood. Described as having a “long, narrow skull with a shallow jaw and probably short, stunted arms with two fingers,” A. montgomeriensis likely lived in the densely wooded rainforest of the Appalachian region some 76 to 80 million years ago. Given its moderate size, paleontologists believe it was an ambush predator that waited within the trees before surprising its prey.

While the fossilized remains of the real A. montgomeriensis weren’t mummified, our dive into the fossil record revealed that experts have, indeed, discovered dinosaurs with flesh still intact.

As we have previously reported, “mummified” fossils are those whose soft tissues were preserved rather than decomposed before undergoing petrification. One such example was a real “dinosaur mummy” discovered by mistake in 2011 when a heavy equipment operator at a Canadian mine accidentally extracted fossilized skin from an armored Nodosaurus, a type of ankylosaur. Smithsonian Magazine reported six years later that the fossil remains were “incredibly lifelike, resembling a sleeping dragon.”

National Geographic sponsored the excavation of the 110-million-year-old fossil specimen, Borealopelta markmitchelli i, and noted that the preservation of its armored plates and scales were the equivalent of the “Rosetta stone for [dinosaur] armor.”  At the microscopic level, bits of red pigment remained that helped scientists determine the dinosaur’s coloring while keratin preserved in the armor clued scientists into the dinosaur’s biological makeup.

Other very intact dinosaurs have been discovered, like the ankylosaur dubbed “Zuul” discovered by the Royal Ontario Museum in Montana whose armor plates, skin, and tail club remained. In 2021, scientists were able to reconstruct the Carnotaurus, “carnivorous bull,” after studying in detail the fossilized skin from remains first discovered in 1984.

In summary, while the widely circulated Facebook post was not itself factual, some of its components were based in fact. B. markmitchelli is the best-preserved armored dinosaur in the world. Royal Tyrrell Museum

“Is This a Photograph of a ‘Mummified’ Dinosaur?” Snopes.Com, https://www.snopes.com/fact-check/mummified-dinosaur/. Accessed 5 Apr. 2022.

“This Is the Best Dinosaur Fossil of Its Kind Ever Found.” Magazine, 12 May 2017, https://www.nationalgeographic.com/magazine/article/dinosaur-nodosaur-fossil-discovery.