Is Cream of Tartar an Effective Treatment for Migraine Headaches?

Numerous websites list cream of tartar as a home remedy for headaches, but the scientific claims made to support the notion are rooted in junk science. 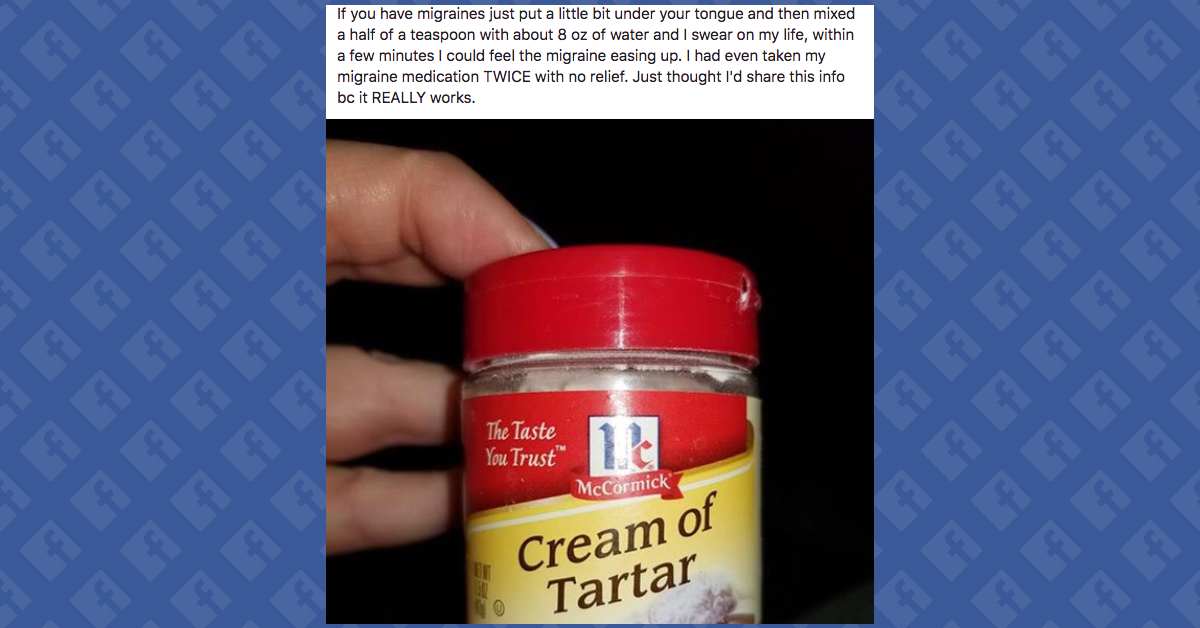 Claim:
Cream of tartar is an effective treatment for migraine headaches.
Rating:

For well over a century, people have made myriad assertions regarding the medicinal properties of cream of tartar, a cooking ingredient with the chemical name potassium bitartrate. Among the claims associated with the potassium-rich compound are that it can be used to manage high blood pressure, to aid in the cessation of smoking, and to soothe muscle aches.

People have also used it in high doses to “cleanse” their bodies in order to lose weight or expunge “toxins,” but ingesting extremely high quantities of the chemical is not advisable as it can result in life-threatening cases of hyperkalemia, which is the abnormally high concentration of potassium in the blood.

Recently, an additional claim made of the chemical has gone viral online: That it can serve as a rapid reliever of migraines or other headaches, as exemplified by a well-shared Facebook post from 12 September 2018: This assertion is perplexing, as (historically speaking) the claims made of cream of tartar have not typically included efficacy against headaches (and some cookbooks geared toward people prone to headaches even warn that the ingredient could itself be a cause of migraines). Therefore, it is difficult to pinpoint the origin of the concept of cream of tartar as a headache remedy, or the purported science underlying it. The most explicit online formulation of the notion comes from a 2015 post on the website “Hello Lovely Living,” which posits cream of tartar as a cure, or “antidote”, for the largely unsubstantiated medical malady known as "MSG poisoning":

So, what is this remedy I speak of? To get straight to the point, it is cream of tartar ... This has to be one of the fastest working remedies I have tried and I think I have tried everything known to man (well almost) ... Cream of tartar is a byproduct of winemaking and is potassium bitartrate, or potassium hydrogen. When taken with water, it neutralizes the effects of MSG poisoning and raises the blood PH of the body, creating an alkaline-forming environment ...

So, what I did was I mixed 1/2 tsp in 8 oz of water and drank it slowly. The taste is tangy, but not anything disgusting. It reminds me of some type of sour candy, but without the sweetness. Upon drinking this, I immediately began to feel better and the dizziness and brain fog that I was experiencing began to dissipate soon after drinking it.

The concept of MSG poisoning is not generally supported by scientific inquiry, the U.S. Food and Drug Administration (FDA) does allow that unrealistically high doses could potentially trigger mild headaches and other symptoms. “Although many people identify themselves as sensitive to MSG,” the FDA wrote in a statement, “in studies with such individuals given MSG or a placebo, scientists have not been able to consistently trigger reactions.”

The “source” that Hello Lovely Living (along with several other websites making the same claim) referenced was the conspiracy- and supplement-peddling website Natural News, whose founder is an occasional guest host for Alex Jones's InfoWars broadcasts. In a Natural News post written by an “herbalist and a classical homeopath”, cream of tartar was listed as a potential treatment for MSG poisoning because it serves to reduce the alkalinity in one's body, a notion aggressively at odds with any medical science.

The concept of “alkalizing” one's body for health purposes is one of the most common tropes in the pseudoscientific natural health world, and it relies on the false notion that one can affect their blood or cellular pH through diet.

Unless you were ingesting a substance such as straight methanol, which would damage your kidneys and prevent them from regulating your body’s blood pH, nothing you consume is going to affect the pH of anything but your urine. Blood and intracellular pH exist within an extremely narrow and precise range meticulously and constantly maintained by various bodily respiratory and excretory functions. As stated in an October 2013 paper in the British Journal of Nutrition, this is true unless one has specific pathologies that prevent the body from sustaining those functions:

Food components trigger neither extracellular fluid acidosis nor alkalosis. Any influence of nutritional origin that slightly disrupts the acid–base equilibrium is at once corrected by biochemical buffering systems operating in both the extracellular and intracellular compartments. Then, as indicated above, come into play the homeostatic systems involved in the regulation of pulmonary ventilation and urinary acid excretion.

With these facts in place, it is clear that the claim of headache relief efficacy as conveyed on viral websites relies on the debatable existence of MSG poisoning as a cause of migraines, as well as the demonstrably impossible notion that one can change blood or body pH through diet. In our view, that makes this specific proposed mechanism for its efficacy untenable and unequivocally false. We also note that such a claim provides no remedy for alleviating migraines caused by anything other than the dubious malady of “MSG poisoning.” If the anecdotal reports of cream of tartar’s efficacy against headaches are real, it apparently works via a different mechanism than the ones proposed on the websites suggesting it to be a remedy.

Bonjour, Jean-Philippe.   "Nutritional Disturbance in Acid – Base Balance and Osteoporosis: A Hypothesis That Disregards the Essential Homeostatic Role of the Kidney."     British Journal of Nutrition.   4 April 2013.