In the past, Chet Hanks made headlines after trolling QAnon conspiracy theorists in videos published to his Instagram account. 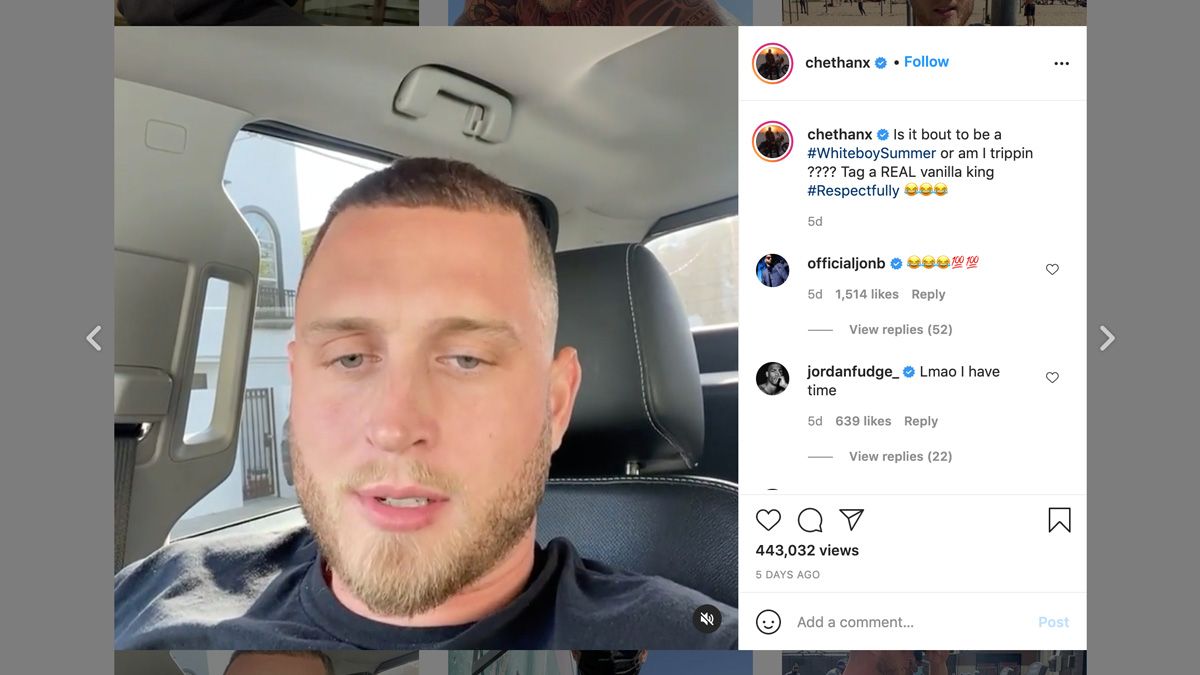 In late March 2021, actor and musician Chet Hanks made headlines after making remarks in an Instagram video. This led Twitter users to tweet about Chet purportedly being the son of two-time Oscar winner Tom Hanks:

One tweet included a video that was shared thousands of times:

Another person shared an analogy:

It's true that Chet Hanks is one of Tom Hanks' sons. His mother, Rita Wilson, is also an actor in major motion picture roles. Tom Hanks also had another son, Colin, and a daughter, Elizabeth, with his previous spouse, Samantha Lewes. Hanks and Lewes divorced in 1987.

The reason why Chet Hanks was being tweeted about in late March and early April was because of two news stories. One involved a phrase from his Instagram videos, while the other was about a purportedly violent incident reported by TMZ.

In an Instagram video from late March, Chet Hanks said he had "feeling" that it was "about to be a white boy summer."

VICE reported of the phrase: "According to Chet, White Boy Summer ultimately means 'nothing but good vibes towards everybody, that means everybody.' He explicitly calls out prejudicial beliefs against anyone from a different background than you, while also encouraging his viewers to 'keep suck-a-duckin.'"

According to Los Angeles Magazine, the "white boy summer" concept also included a number of rules about clothing and phrases.

On March 31, TMZ published a video that showed a purportedly bloodied Chet Hanks after an altercation with an ex-girlfriend:

Chet Hanks and an ex-girlfriend are at war over a volatile relationship that recently ended -- with both of them slinging allegations of violence, and there's video of a bloodied Hanks.

TMZ has obtained video of what Chet says is the end of an altercation between him and his ex, Kiana Parker, that turned violent back on January 8 at Chet's place in Sugarland, TX. Chet turns the camera on Kiana when she appears to swipe at him as she holds a pot, with a bloodied Chet reappearing in the next frame, saying she charged at him with the knife ... something Kiana denies.

Chet's not the only one to claim violence ... Kiana got a restraining order against Chet in January, alleging he roughed her up on multiple occasions between Oct. 2020 and Jan. 2021.

Hanks also was no stranger to trolling viewers when it came to the debunked ideas in the QAnon conspiracy theory. In a March 2020 video, he made fun of "a lot of Trump supporters" who purportedly believed Tom Hanks and his family were all involved in "elite pedophile sex trafficking rings":

We previously debunked the false rumor.

On March 31, @StephBencin tweeted the joke: "If Tom Hanks is America's dad, that means Chet is America, which totally tracks." The same was also tweeted earlier by @TheMarkDowling.

In sum, it's true that Chet Hanks is the son of Hollywood actor Tom Hanks.