Were Chariot Wheels Found at the Bottom of the Red Sea?

Claims that archaeologists discovered Pharaoh's chariot and the bones of horses and men under the Red Sea stemmed from fake news. 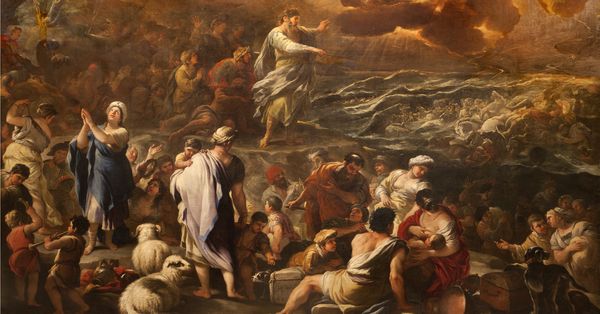 Claim:
Archaeologists have discovered Pharaoh's chariot and the bones of horses and men under the Red Sea.
Rating:

On 24 October 2014, the web site World News Daily Report (WNDR) published an article reporting that chariot wheels and the bones of horses and men had been discovered at the bottom of the Red Sea, thereby supposedly proving archaeological proof of the Biblical narrative about the escape of the Israelites from the Egyptians. According to the Book of Exodus, God parted the Red Sea long enough for the Moses-led Israelites to walk across it on dry ground, but closed the waters up again upon the pursuing Egyptian army and drowned them all:

Egypt's Antiquities Ministry announced this morning that a team of underwater archaeologists had discovered that remains of a large Egyptian army from the 14th century BC, at the bottom of the Gulf of Suez, 1.5 kilometers offshore from the modern city of Ras Gharib. The team was searching for the remains of ancient ships and artefacts related to Stone Age and Bronze Age trade in the Red Sea area, when they stumbled upon a gigantic mass of human bones darkened by age.

The scientists lead by Professor Abdel Muhammad Gader and associated with Cairo University’s Faculty of Archaeology, have already recovered a total of more than 400 different skeletons, as well as hundreds of weapons and pieces of armor, also the remains of two war chariots, scattered over an area of approximately 200 square meters. They estimate that more than 5000 other bodies could be dispersed over a wider area, suggesting that an army of large size who have perished on the site.

However, if one is looking for news of an important scientific or historical discovery, World News Daily Report is not the place to look. WNDR is fake news site whose disclaimer notes that the site's articles are satirical in nature:

Despite WNDR's framing of the alleged "discovery" as recent and newly announced, reports of divers finding chariot wheels and the like under the Red Sea are a hoax that has been promulgated for many years now.

The WNDR article's use of language such as "this morning" and its claims that a team of "underwater archeologists" in Egypt responsible for the discovery were planning to recover more artifacts from the site reinvigorated interest in the long-discredited rumor, but those details were not only fabricated, they had simply been recycled from past claims and infused with more recent dates. In October 2015, the equally dubious web site Disclose.TV once again jump-started the phony rumors by republishing the year-old fake WNDR article.