Was Cesar Sayoc an Obama-Supporting Stripper Before Trump’s Rise?

Cesar Sayoc, Jr., the alleged anti-Democrat mail bomber, was a stripper at various points in his life, but there is no evidence that he ever held pro-Obama views. 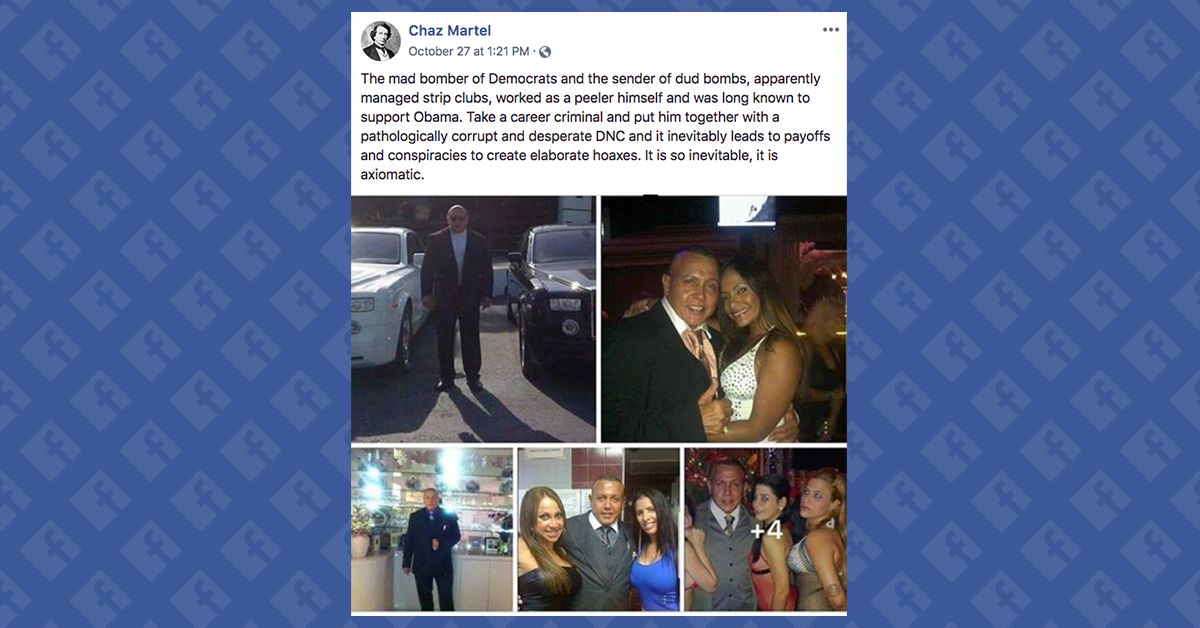 Claim:
Cesar Sayoc, the man accused of mailing bombs to prominent Democratic lawmakers and media organizations critical of President Trump, used to be a stripper and was “long known to support Obama.”
Rating:

Casar Sayoc has been employed as a stripper in the past and more recently has managed stripping acts.

There is no evidence that Sayoc was ever a supporter of President Obama.

On 27 October 2018, a Facebook account bearing the face of controversial 19th-century Canadian Prime Minister John H. Macdonald shared a post that alleged two facts about Cesar Sayoc, the accused perpetrator of several attempted mail bombings: that he used to work as a stripper, and that he “was long known to support Obama” during that time: It is unclear what the author of this post meant to imply by combining the fact that Sayoc worked in strip clubs with the false assertion that he was an Obama supporter, but of the two claims raised, there is only support for the first.

In the days following Sayoc’s arrest, several media outlets attempted to profile the man who had covered his live-in van with Trump memes and sent what appeared to be pipe bombs to Trump’s political and media opponents. These profiles describe a directionless individual who worked at strip clubs in various capacities throughout his life, but who only found a political awakening in the run-up to the 2016 presidential election, when he became a supporter of President Trump.

Was Cesar Sayoc a Stripper?

Several individuals have stated that Cesar Sayoc has not only been employed at strip clubs, but worked as a stripper himself. Ohio event promoter Tony Valentine told the Washington Examiner that he “hired Cesar Sayoc to strip on multiple occasions during the 1990s and that Sayoc, now 56, traveled the country for similar appearances.”

"He really couldn't find his niche in life, and I guess he found it now," Valentine told the Washington Examiner. "Back in the '90s, he was running around from Minnesota to the Carolinas to Florida. He was like a gypsy."

For two months in 2004, according to a profile in the New York Times, Sayoc was married to a woman who was also a stripper. That woman’s mother told the Times that the two “went on the circuit together” as “dancers”:

He had a short-lived marriage to a woman identified in court papers as Roberta Altieri that ended in divorce in Oklahoma City in 2004, according to court records. Billie Mode, the mother of his ex-wife, said the couple worked in strip clubs and were married just two months. “They were dancers,” Ms. Mode said. “They went on the circuit together.”

According to Valentine (the event promoter who had worked with Sayoc in the 1990s), he had heard that, as of about five years ago, Sayoc was working as an employee at a female strip club while performing on the side at an all-male strip club in Florida.

More recently, he has appeared in posts on the Facebook page "Chippen Fellas," apparently run by Sayoc himself to promote his “Hard Rock International Entertainment” brand. This page advertised all-male shows and in one instance included a dated picture of someone who appears to be Sayoc alongside more recent photos of younger men. It is unclear whether he ever performed with this group or merely served as a manager: According to the Times, Sayoc showed up to work as a DJ at a West Palm Beach strip club named Ultra the day before he was arrested.

Did Sayoc Support Obama and Other Democrats In The Past?

There is no evidence to support the claim that Sayoc, who sent a pipe bomb to the Obama family, ever supported President Obama. Sayoc registered to vote as a Republican in Florida on 4 March 2016, “just ahead of the March 2016 Republican primary,” according to the Associated Press. Some have attempted to use doctored images from a MyLife.com background check to assert he was a registered Democrat, but this claim is not rooted in reality. A check of the official Florida voter registry indicates he is currently registered as a Republican.

By all accounts, Sayoc lived a fairly apolitical life leading up to the 2016 presidential election. Ronald Lowy, a lawyer for the Sayoc family who represented Cesar during a 2002 case in which he threatened to bomb an electric company over a bill he disputed, told the Times that although Sayoc’s family members were Democrats, Cesar himself “seemed to have no outspoken partisan views during the 2002 case.”

Lowy’s recollection jibes with what a different lawyer, Daniel Lurvey (who represented Sayoc against theft charges in 2013 and 2014), remembers of the man’s political leanings. He told the Washington Examiner that he could not recall Sayoc ever discussing politics. Instead, it appears that Sayoc’s chief interests during this time were bodybuilding and wrestling:

When they first met [over the 2002 bomb threat case], Mr. Lowy said, Mr. Sayoc brought in a scrapbook filled with notes and photographs he had collected from wrestlers, bodybuilders and strippers, table scraps from a world that he idolized. “He comes across like a 15-year-old,” Mr. Lowy said. “He has a total lack of maturity.” [...] He said that Mr. Trump’s angry rhetoric and his appeals to the “forgotten man and woman” during the 2016 campaign seemed to strike a deep chord with Mr. Sayoc, whose father had abandoned the family when he was a child.

By 2015, it became clear that Sayoc was an outspoken and enthusiastic Trump supporter. That year, In what may have been an effort to make a false insurance claim, he reported to police that $45,000 worth of “suits and costumes he needed for his business” were stolen from his van. According to the Times, that police report noted “that of the 139 pieces he said were taken, 11 were the president’s clothing brand.”

Sayoc also attended a Brevard College alumni event with members of his college soccer team that year, during which he “quickly made clear he was a fanatical supporter of Mr. Trump, and bombarded them with racist and misogynist conspiracy theories.” Two managers at a pizza shop where Sayoc worked in 2017 recall the man making racist remarks while explicitly attacking President Obama and praising President Trump:

“He loved Adolf Hitler; he talked about Adolf Hitler a lot,” said Debra Gureghian, 56, a manager at the Fort Lauderdale pizza shop where Mr. Sayoc worked for about a year in 2017. “He would say, ‘I like his politics, we should have more people like him.’” Mr. Sayoc went on paranoid, racist screeds, saying that blacks and Hispanics were taking over the world. He referred to Mr. Obama with a racist slur and said he was not a citizen. ...

Teresa Palmer, 48, another manager, said that she also recalled [his pro-Trump-stickered white] van, and that Mr. Sayoc would say “nasty things” about minorities. She remembered him mentioning Mr. Trump, but only recalled him saying that Mr. Trump made a “great” president.

During this time, Sayoc was an outspoken proponent of conservative conspiracy theories and pro-Trump memes, which he shared both on social media and the windows of his sticker-covered white van. There is no such support for the notion that he was pro-Obama, pro-Democrat, or even political at all prior to 2015.