Did CDC Recommend Temporary Pause in US J&J Vaccine Distribution?

The vaccine was one of three deemed safe under an emergency-use authorization. 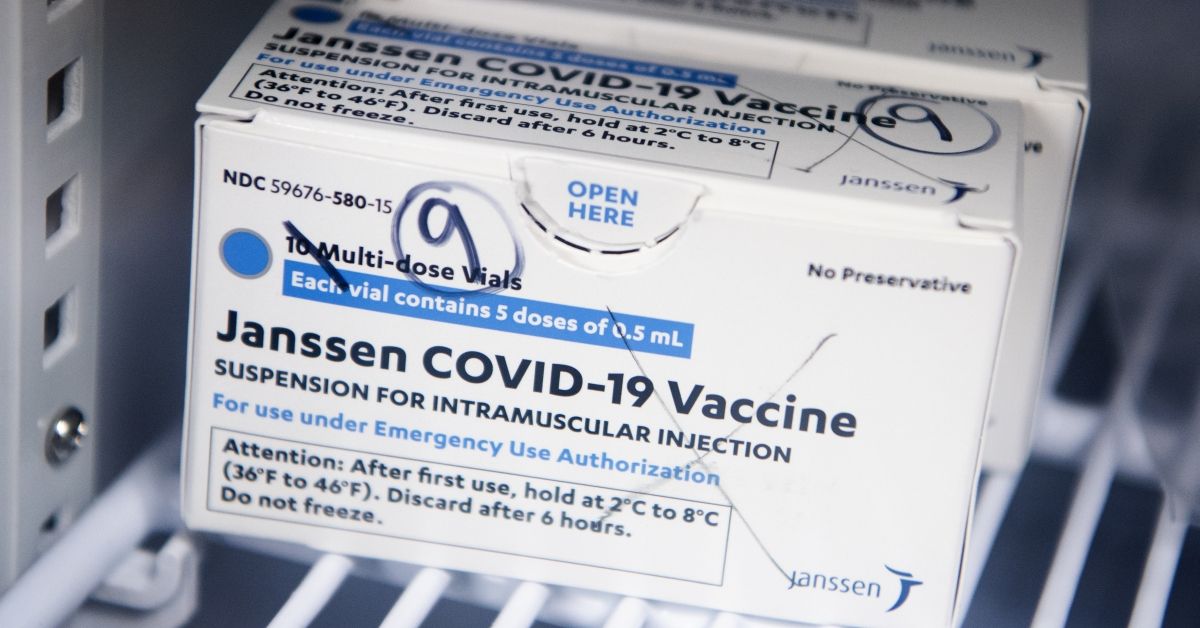 Claim:
On April 13, 2021, U.S. government health officials recommended a temporary halt in the distribution of Johnson & Johnson COVID-19 vaccines across the nation citing concerns over a rare but serious blood clotting side effect.
Rating:

After calling for a temporary pause in the distribution and use of the Johnson & Johnson vaccine in the U.S., a CDC advisory panel recommended resumption of inoculations using the vaccine, along with a warning label about the rare risk of blood clots in those who receive it.

Important update: On April 23, 2021, the CDC recommended resuming vaccinations with the Johnson & Johnson vaccine after concluding that the benefits outweigh the risks. However, the vaccine will now carry a warning label about the risk of blood clots, which the CDC still says is rare. According to news reports, CDC Director Rochelle Walensky is expected to sign off on the recommendation, at which point distribution of the vaccine will resume. We have thus revised our rating for this claim from "True" to "Outdated."

Below is our original fact check on this claim:

U.S. government health officials recommended a temporary halt in the distribution of Johnson & Johnson (Janssen) COVID-19 vaccines across the nation in mid-April 2021, citing concerns over a rare but serious blood-clotting side effect.

The Centers for Disease Control and Prevention (CDC) and the U.S. Food and Drug Administration (FDA) issued a joint statement on April 13 to recommend a pause in the use of the Johnson & Johnson vaccine “out of an abundance of caution.” The vaccine was one of three deemed safe by the FDA under an emergency use authorization.

Health officials reported that at least six women between the ages of 18 and 48 experienced a rare and severe type of blood clot called a cerebral venous sinus thrombosis (CVST) within six to 13 days after receiving their vaccination. As of April 12, more than 7.2 million doses of the Johnson & Johnson vaccine had been administered in the U.S., meaning that less than one-in-a-million recipients experienced a CVST — .000083% of those who had received their single-dose vaccine.

“Of the clots seen in the United States, one case was fatal and one patient is in critical condition,” said Dr. Peter Marks, director of the FDA Center for Biologics Evaluation and Research, in a media briefing held on April 12. “While we review the available data, out of an abundance of caution, the FDA and CDC are recommending a pause in the use of this vaccine in the United States.”

CVST is a rare form of stroke that occurs when a blood clot forms in the brain’s venous sinuses and prevents blood from draining, according to Johns Hopkins Medicine. Blood cells can break and leak into the brain tissues, resulting in a hemorrhage. Annually, five in 1 million Americans will experience a CVST, more than five times the amount of those associated with the Johnson & Johnson vaccine. Generally speaking, CVST is three times more common in women than men and is most often associated with being a severe side effect of oral contraceptive pills. In fact, one study found that women using oral contraceptives are seven times more likely to suffer a CVST than those who do not.

Adults who are pregnant, have cancer or low pressure in the brain, problems with blood clotting and those who experience inflammatory bowel or collagen vascular diseases may be at a heightened risk for CVST. Symptoms include headache, blurred vision, fainting or loss of consciousness, or loss of control or movement in parts of the body.

“The health authorities advise that people who have received our COVID-19 vaccine and develop severe headache, abdominal pain, leg pain, or shortness of breath within three weeks after vaccination should contact their health care provider,” wrote Johnson & Johnson in a statement following the temporary suspension. The global medical producer also noted that it is reviewing cases with European health authorities and decided to “proactively delay the rollout” of the vaccine in Europe.

On April 20, the European Medicines Agency concluded that a warning about the unusual blood clots with low blood platelets should be added to the product information for the COVID-19 Johnson and Johnson vaccine. However, the agency reviewed all cases in the U.S. and confirmed that the overall benefits outweighed the risks.

“COVID-19 is associated with a risk of hospitalization and death. The reported combination of blood clots and low blood platelets is very rare, and the overall benefits of COVID-19 Vaccine Janssen in preventing COVID-19 outweigh the risks of side effects,” wrote the EMA.

“One plausible explanation for the combination of blood clots and low blood platelets is an immune response, leading to a condition similar to one seen sometimes in patients treated with heparin called heparin induced thrombocytopenia.”

Treatment of this particular type of blood clot is different from typical treatments for other types of blood clots, which usually involve an anticoagulant called heparin. According to Marks, heparin may be dangerous when used to treat CVST and alternative treatments need to be given, preferably under the guidance of physicians experienced in the treatments of blood clots.

The temporary suspension of Johnson & Johnson vaccine distributions came after the AstraZeneca vaccine was temporarily put on hold in Europe for its connection to rare blood clots. At least 37 cases of blood clots were reported out of 17 million people who had received the AstraZeneca vaccine as of mid-March 2021, however many of the nations since resumed vaccinations after the European Medicine Agency determined that the vaccine was “safe and effective.” (As of this writing, AstraZeneca was not available in the U.S.)

Both the Johnson & Johnson and AstraZenca COVID-19 vaccines are what are known as adenovirus or viral vector vaccines, which deliver a weakened form of the virus into the human body to elicit an immune response. Scientists began creating viral vectors in the 1970s, and the technology has been used in a number of medical interventions, from gene therapy to cancer treatment. mRNA vaccines like the Pfizer and Moderna COVID-19 vaccines are a new type of vaccine that have been well-researched in recent decades for their ability to be developed quickly in a laboratory using readily available materials. These types of vaccines deliver fragments of genetic material into the human body to “teach” cells how to make a protein to trigger an immune response.

As noted above, people who have received the Johnson & Johnson vaccine who develop a severe headache, abdominal pain, leg pain, or shortness of breath within three weeks after vaccination should contact their health care provider, noted the FDA. Health care providers are asked to report adverse events to the Vaccine Adverse Event Reporting System.

Health officials with the CDC Advisory Committee on Immunization Practices voted the following day to postpone voting on recommendations for the temporary suspension of the Johnson & Johnson vaccine distribution until the following week. We will be sure to update the article accordingly.

At the meeting, leading health experts reported that in the eight U.S. cases of CVST, the patients experienced "vaccine-induced thrombotic thrombocytopenia," a condition with low a significantly low blood platelet count. Though it is too early to determine risk factors associated with CVST in those who receive the Johnson & Johnson vaccine. Of the eight cases, three experienced obesity, two hypothyroidism, one hypertension, and one with asthma. One individual died as of this writing while three were in the hospital (two of whom are in the ICU), and two have been discharged.

It is known that at least 52% of Johnson & Johnson doses were administered from March 30 to April 13. Because the CDC expects CVST symptoms to develop within three weeks, it is possible that there will be more reported cases in the coming weeks, at which point health experts hope to have a better idea of related incidents. The next scheduled meeting for the APIC is expected to take place on April 23. We will update the article accordingly.

Until then, the public is asked to continue monitoring their side effects through the CDC V-Safe program and watch for symptoms like headache, abdominal and leg pain, and shortness of breath within three weeks of vaccination. Healthcare providers are asked to review the CDC and FDA fact sheets and seek alternative therapies to heparin.

Update [April 14, 2021]: This article was updated to include new information provided during the CDC Advisory Committee on Immunization Practices meeting.

Update [April 20, 2021]: This article was updated to include the EMA’s decision to add a warning to the product information and the published time for the APIC meeting on April 20. The total case count of thrombosis in combination with thrombocytopenia was also updated to eight.

Update [April 23, 2021]: This article was updated to report that the CDC on this date recommended resuming the use and distribution of the vaccine.