Does This Video Show Caravan Members Tearing Down a Border Fence?

Misinformation concerning a group of asylum seekers was prevalent online in October 2018, but a video showing a border fence between Mexico and Guatemala being torn down is real. 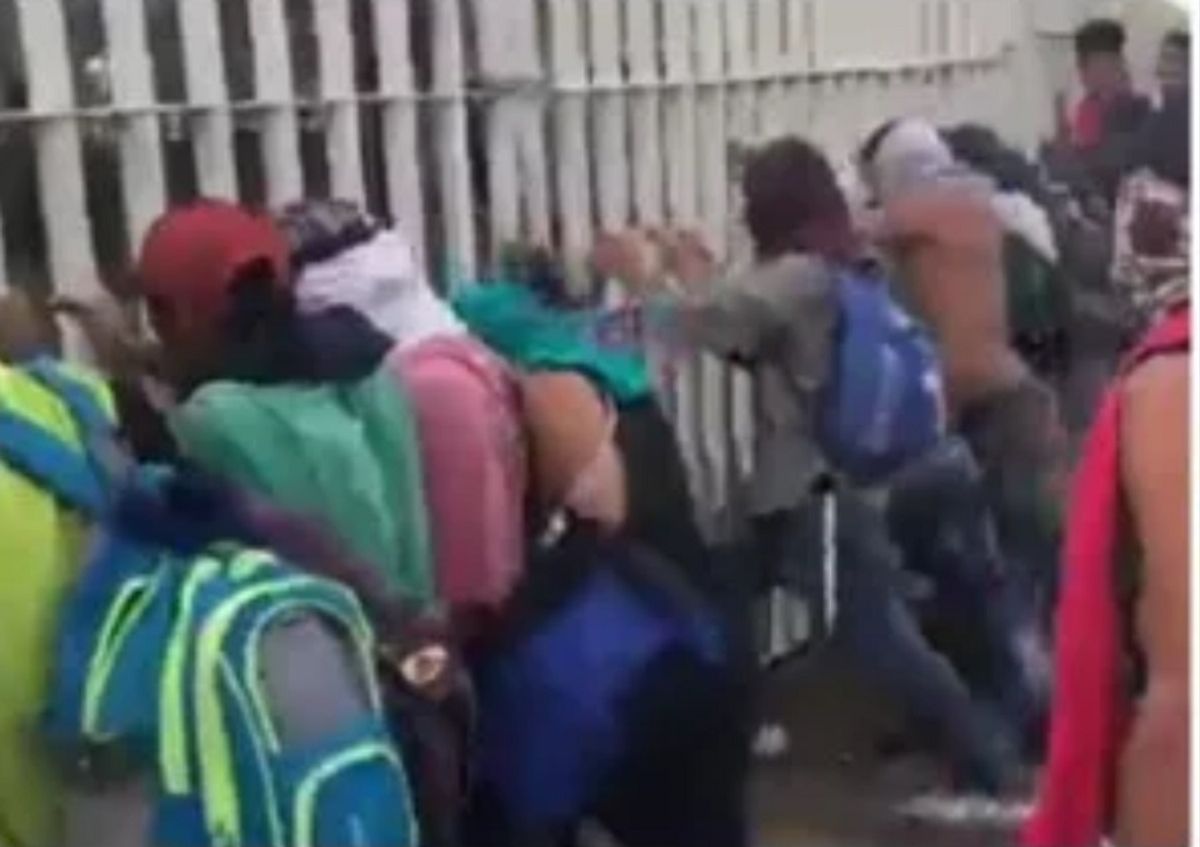 Claim:
A video shows a group of asylum seekers tearing down a border fence between Mexico and Guatemala.
Rating:

A video shows a group of asylum seekers tearing down a border fence.

The fence seen in the video is along the Guatemala-Mexico border, not the U.S.-Mexico, and the people seen tearing it down were part of a smaller, trailing caravan and not the main Honduran caravan.

In October 2018, a number of hoaxes were circulated about a caravan of Central American asylum seekers making their way north from Honduras to the Mexico-United States border. So when a video of caravan members tearing down a "border fence" went viral, many viewers were skeptical about what it showed:

This video is real, although it shows activity taking place along the border between Mexico and Guatemala (not Mexico and the United States) and features members of a smaller caravan (not the main caravan that has garnered so much press attention in the U.S.).

We haven't been able to find the original source for this clip, but a photograph from Getty Images confirms that this video was taken along the border of Guatemala and Mexico on 28 October 2018. A comparison of the Getty photograph (right) and a still from the video (left) shows many of the same people from the caravan pushing on the border fence:

The Getty Images photograph was captioned as follows:

Honduran migrants taking part in a caravan heading to the US, tear down the border fence between Ciudad Tecun Uman in Guatemala and Ciudad Hidalgo, Mexico, on October 28, 2018. -- A new group of Honduran migrants is trying to reach and cross the Guatemalan border into Mexico in the hope of eventually realizing the 'American dream' and reaching the United States. (Photo by SANTIAGO BILLY / AFP)

Several people shared this footage with captions noting that it was filmed on "Mexico's border." While this description is technically accurate, it may have misled some viewers into believing that the events seen on the video were captured along the border between the United States and Mexico -- but Ciudad Tecun Uman, where this video was shot, is more than 1,000 miles from the United States. Moreover, the people seen in this video were not members of the main caravan that drew so much attention in the U.S., but a much smaller group trailing in its wake.

Newsweek reported that migrants clashed with police shortly after this border gate was ripped down, with one asylum seeker killed in the melee and dozens more injured:

A 26-year-old Honduran man who had been traveling to the U.S. border with a caravan of Central American asylum seekers died after the group clashed with Guatemalan and Mexican police on a border bridge between the two countries.

The group of predominantly Honduran migrants had been trying to pass through Guatemalan border town Tecun Uman to Ciudad Hidalgo in Mexico, but they were blocked by authorities, who locked metal gates separating the two countries, the Associated Press reported.

Migrants broke through the barriers, however, leading to a clash with police that reportedly left dozens of people injured ...

The migrants involved in the clash appear to be part of a smaller caravan following the journey of a larger group that began traveling earlier this month and is already winding its way through Mexico toward the U.S. border, where migrants plan to seek asylum.