A widely shared meme distorted a proposed gender-neutral naming policy in the city of Berkeley, likely for satirical reasons. 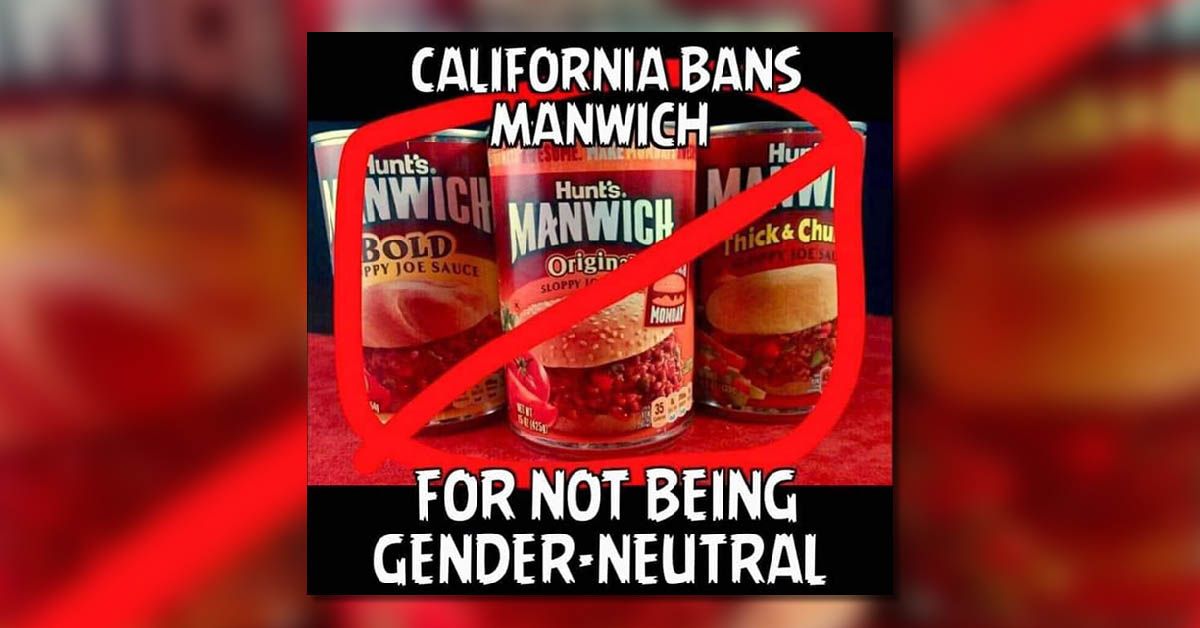 Claim:
In July 2019, the state of California banned the sale of Hunt's "Manwich" sauce, or the use of the word "Manwich."
Rating:

Political correctness is a frequent source of ridicule and outrage, especially among right-leaning observers and commentators, but it is also the subject of a significant quotient of misinformation and exaggerated claims. The perceived progressive bastion of California is a particularly frequent target of distorted and sensationalist reporting, especially when it comes to policies surrounding sexual orientation and gender identity.

In July 2019, we received several inquiries from readers about the veracity of a widely shared meme that claimed California had banned "Manwich" — a type of meat sauce made by Hunt's — because it was not gender-neutral.

In reality, California had not banned or proposed banning Hunt's "Manwich" sauce, or the use of the word "Manwich, or sought to force the company to rename the product. The "Manwich" meme was likely intended to be satirical and was part of a wave of wry online commentary following the proposal of an actual policy in Berkeley, California, that would eliminate several gendered terms from the text of the city's laws, and replace them with gender-neutral ones, for example substituting "work force" for "manpower."

On July 16, Berkeley City Council voted to adopt the first reading of an ordinance that sought to amend the Berkeley Municipal Code by replacing gendered words and terminology with "non-gendered" or gender-neutral alternatives, in the text of the code.

The ordinance was first proposed by Council Member Rigel Robinson in March 2019. It would not prohibit the use of gendered words in the city of Berkeley, but rather simply "degenderize" the text of the city's laws. Furthermore, the proposal related only to Berkeley's Municipal Code and had no bearing on California state law, nor did the episode involve state lawmakers. A second reading of Robinson's proposal was scheduled for July 23, and at time of publication, the council had not yet given the ordinance final approval.

The ordinance, which can be read in full here, contained several proposals for amending the text of the city's laws, including:

Some of the proposed changes did involve replacing commonly used words containing "man" as a prefix or suffix with gender-neutral alternatives, for example "maintenance hole" for "manhole," "human made/machine made" for "man made," and "human effort/work force" for "manpower."

However, the list of proposed changes did not include "Manwich," and although the ordinance stipulated that the list of new terms was "non-exhaustive" and could be amended in future, it's hard to imagine a scenario in which the brand name of a meat sauce would be required to be included in the city of Berkeley's municipal code, thereby causing the gender-neutral naming policy to kick in.

Bearing in mind the fact that Robinson's ordinance did not seek to prohibit the general use of gendered words, including by members of the public, the claim of a ban on either the sale of the "Manwich" product, or the use of the brand name "Manwich," is doubly wrong.

"Manwich" is a protected trademark first registered with the U.S. Patent and Trademark Office in 1970 by Hunt's, which was then known as Hunt-Wesson Foods. (Hunt's "Manwich" meat sauce has been in existence since the 19th century, but was not a trademark until around 70 years later).

Any legislative effort to quash the use of the "Manwich" trademark, or to de-register it, on the basis of its containing a supposedly offensive gendered term, would certainly fail to pass constitutional muster, based on the First Amendment right to free expression, but also in light of a June 2019 U.S. Supreme Court ruling. That ruling held that a trademark could not be denied on the basis of the U.S. Patent and Trademark Office's subjective view of it as "immoral or scandalous."