Did California Attempt to Force Parents to Accept a Curriculum That Teaches Children 'There Are 15 Genders'?

Conservative websites exploded into outrage at what they described as mandatory "indoctrination sessions" on gender identity for K-12 students. 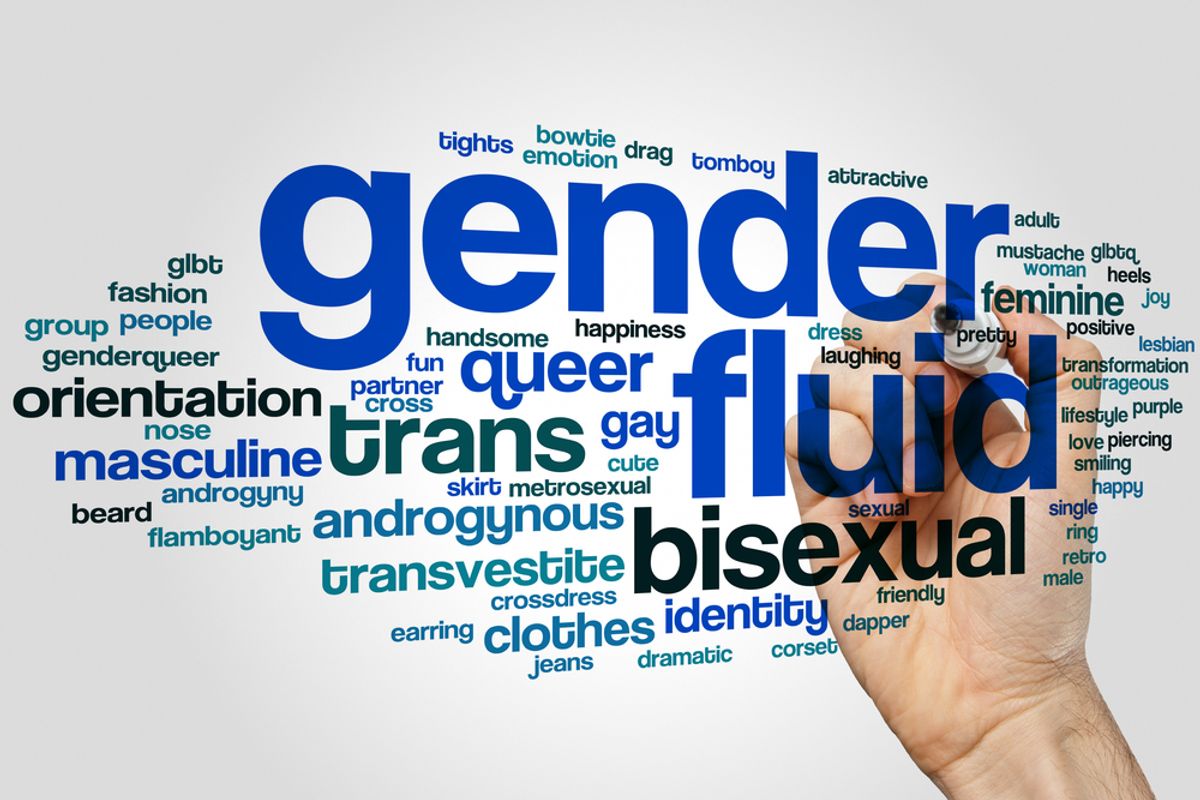 Claim:
In 2019, California education authorities formulated a policy that, if implemented, would force parents to allow their children to be taught that "there are 15 genders."
Rating:

In January 2019, right-leaning websites responded with outrage to what they presented as a new curricular requirement for schoolchildren in the state of California.

In a viral 27 January Facebook video, the "Freedom Project's" Duke Pesta claimed that "The state of California is now moving to mandate that kindergarten teachers teach five-year-olds 15 different genders in every single California kindergarten school."

FreedomProject's Alex Newman joined in, calling the purported policy "absolute insanity masquerading as education," "sick," and an example of "the destruction of civilization":

In an 18 January article, Newman wrote:

"The California Department of Education is working on a plan to teach kindergartners that there are at least 15 different 'genders.' The materials under the scheme also claim it is impossible to know whether babies are boys, girls, or something else, because they cannot talk yet. Parents will not be notified and are not allowed to opt their children out of the indoctrination sessions."

That Freedom Project article carried the headline "California Wants to Teach Kindergartners There are 15 Genders" and cited an earlier report from the right-leaning FaithWire website headlined "15 Genders? California Educators Push to Force Progressive Ideology on Elementary Students," adding that:

"California elementary school students could soon be the targets of progressive sexual indoctrination if new health guidelines are approved. The guidelines, listed under the California Department of Education’s proposed Health Education Framework, include educational resources that teach children to reject gender stereotypes and embrace a rainbow of possible gender options. One recommended book called Who Are You? teaches that there are at least 15 genders, and that it’s impossible to determine whether a baby is a boy, a girl or something else."

What the guidelines actually say

The Health Education Framework (HEF) is a lengthy document created by the California State Board of Education (SBE) and designed to set out various policies and guidelines on several areas relating to the health, well-being, and development of K-12 students.

In January 2019, the SBE updated and revised the HEF for the year ahead, and as part of that effort, the document was put through a process of public feedback and consultation. As of 28 January, the draft of the HEF was around 820 pages long and had nine chapters.

In one section of Chapter 3, the document set out guidelines for educating first-grade students (not "kindergartners," as FreedomProject falsely claimed) about growth and development, and a sub-section called "Partnering with the family" made the following suggestions (on page 70):

At this young age, it is important for students to recognize parents, guardians, caretakers, and other trusted adults as resources for information on growth and development...Setting a foundation for dialogue at this early age can establish a comfortable rapport between students and their parents, guardians, or caretakers as they encounter more complex subjects related to growth and development.

Parents, guardians, or caretakers receive a handout with suggestions on how to initiate a conversation on growth and development with their child. Books such as It’s Not the Stork! A Book About Girls, Boys, Babies, Bodies, Families and Friends by Robie H. Harris (2008) or Who Are You?: The Kids Guide to Gender Identity by Brook Pessin-Whedbee (2017) can be shared together.

So FreedomProject's Pesta made two substantive factual errors within the first sentence of that group's viral Facebook video, claiming "The state of California is now moving to mandate that kindergarten teachers teach five-year-olds 15 different genders in every single California kindergarten school."

In reality, the relevant section of the guidelines related to first-graders, not kindergartners, and provided recommended reading materials for parents, not teachers.

What the recommended reading actually said

Pessin-Whedbee's book Who Are You? addresses issues surrounding gender identity among children and advises that an individual child is best-placed to decide his or her own gender identity, which the book distinguishes from "the sex assigned to you at birth, male or female." Parents and adults "make a guess" at a baby's gender, the book says, "by looking at their bodies."

Some people say there are only two genders. But there are really many genders. You are who you say you are, because YOU know you best. For some people, the grown-ups guessed right about their body and their gender. This is called cisgender -- when someone's identity matches their sex assigned at birth. And for some people, there are more than just two choices. These are just a few words people use: trans, genderqueer, non-binary, gender fluid, transgender, gender neutral, agender, neutrois, bigender, third gender, two-spirit ... and there are even more words people are using to describe their experience. This is called the gender spectrum.

It's not clear what the source was for the figure of "at least 15 genders." Who Are You? mentioned 12 descriptive terms for the concept of gender identity, not 12 (or 15) separate and distinct gender identities.

The other suggested book, It's Not the Stork!, addresses issues around how babies are made, how children grow and develop, and how they can become familiar with their own bodies and understand personal physical boundaries, among other questions.

Interestingly, that book only mentions and recognizes two genders, male and female, and many pages are dedicated to explaining to children how "boys and girls" differ — especially anatomically — and the ways in which they are similar or the same.

Although Robie H. Harris' and Michael Emberley's book makes a point of showing children that gender stereotypes are not set in stone, it does not differentiate between birth-assigned sex and gender identity, stating:

"One of the ways that you can tell boys and girls apart is by their bodies. Girls' and boys' bodies are mostly — but not exactly — the same. Girls and women have a vagina. Boys and men have a penis. These are some of the special parts of our bodies that make a person a boy or a man — or a girl or a woman."

Although the book acknowledges same-sex relationships and parenthood ("Some families ... have two mommies, some have two daddies"), it does not mention or acknowledge gender fluidity or transgender identity, stating more than once that "Girls grow up to be women, boys grow up to be men."

These explanations go against those contained in Who Are You?, which explicitly states "there are really many genders," as opposed to the two (male/female, boy/girl, man/woman) outlined in It's Not the Stork!

This is significant because the same sentence in Chapter 3 of the draft HEF suggests both books to parents to read with their children. However, neither the FaithWire nor FreedomProject coverage of the document mentioned the second book. This was a conspicuous omission that created the grossly misleading impression that the California Department of Education was engaged in an effort to force only one view of gender identity on parents and children. Clearly, that was not the case.

After all, if the inclusion of Who Are You? in the draft framework meant, as its critics claimed, that the education department was attempting to "indoctrinate" children into the view that "there are really many genders," then as a matter of logical necessity the inclusion of It's Not the Stork! in the same sentence and the same section of the draft framework would mean the department was also attempting to "indoctrinate" children into the view that "Girls and women have a vagina, boys and men have a penis" — the very same viewpoint that FreedomProject and FaithWire purported to be defending in the first place.

Perhaps the most serious factual error in FreedomProject and FaithWire's coverage of the draft 2019 HEF was their claim that the curriculum (which they said included the book Who Are You?) was mandatory, and that parents and guardians who did not approve of it had no recourse.

In their article, FaithWire wrote: "What about parents who would prefer that their children not be exposed to errant gender ideology? Unfortunately, there would be no opt-out option."

In his article, Newman claimed that "Parents will not be notified and are not allowed to opt their children out of the indoctrination sessions."

In FreedomProject's viral Facebook video, Pesta solemnly warned: "Moms and dads will be utterly unable to opt their kids out of this. You will not be able to hold your five-year-old kindergarten kid home if they're teaching '15 genders,' you're going to have to -- under the peril of the law -- compel your kids to attend this."

That claim was utterly false. As we've established -- and as even a brief check of the draft framework would have revealed to FreedomProject -- Who Are You? was recommended as reading material for parents, not teachers, and the document said only that the two books listed there "can be shared" between parents and their children, not that they must be shared.

A spokesperson for the California Department of Education confirmed the optional nature of the recommendations, writing to us in an email that: "The purpose of the framework is to provide guidance for teachers and administrators. There is nothing mandatory about the guidance offered in the framework ... LEAs [school districts] are not obligated to use any suggested curriculum or handouts referenced in the framework."

When asked what consequences there might be if a parent or guardian declined to read any of the suggested books with their child, the Department of Education spokesperson replied simply, "None."