An advertisement promotes a rather off-putting mid-century meat product. 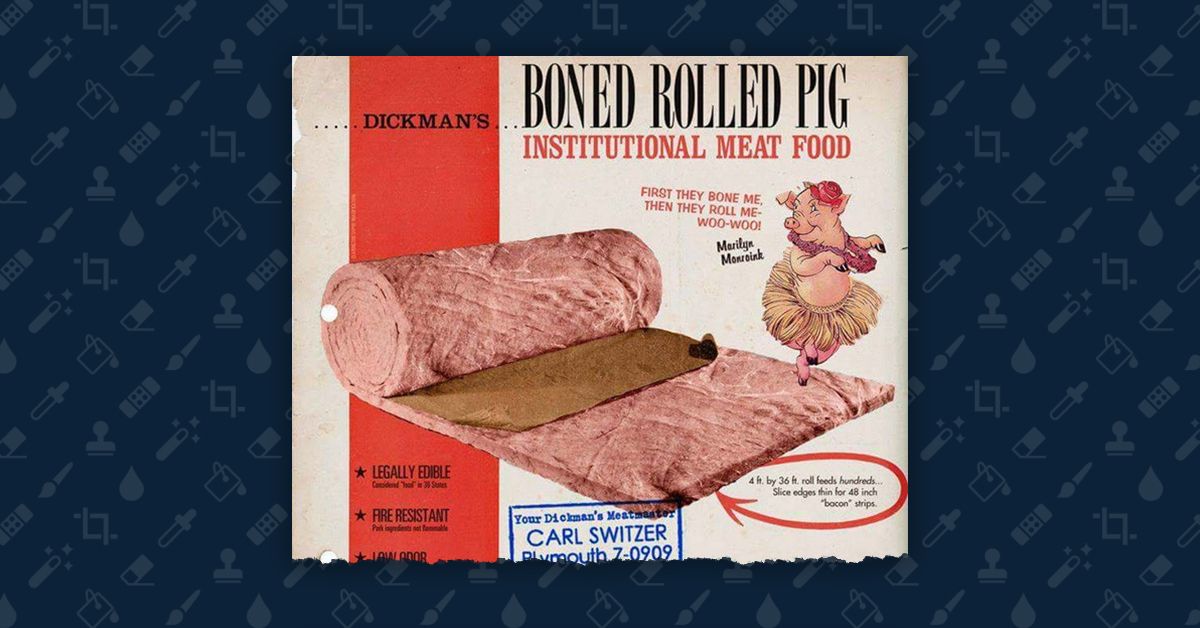 "The past is a foreign country," wrote L.P. Hartley in The Go-Between. "They do things differently there." Humanity being the omnivorous species it is, nowhere are these differences more immediately obvious than in food choices between then (whenever "then" was) and "now" (whenever "now" is).

In this spirit, American menus during the middle decades of the twentieth century -- chock-full of questionable cuisines as they were -- made it difficult to immediately know the answer to a burning question: Could people really once buy a "legally edible" product called "boned rolled pig" from grocery chains? An image purportedly showing a vintage advertisement for the "institutional meat food" started appearing in various corners of the Internet in 2018: Although the advertisement was filled with jokes (would a company really advertise a pork product as "fire resistant" or admit that this "legally edible" food contained a minimum amount of vermin droppings?), some viewers conceded that it could possibly just another remnant of America's strange product history. There was a time, after all, when both cigarettes and cocaine were considered medicinal.

However, in this case, the image is a hoax. It was created by Cris Shapan, a comedian and graphic designer who has a penchant and talent for creating fake vintage advertisements. Although Shapan's fans are typically aware that his artwork is intended to be humorous in nature, these images are occasionally shared without attribution or context and thus eventually get mistaken for genuine. In April 2016, for instance, we debunked another one of Shapan's faux advertisements featuring a product called "Winking Glue."

The fake "boned rolled pig" advertisement appears to be based on a genuine ad for a genuine vintage product with an equally strange name: The original image comes from Flickr user mikeyashworth, who said that it appeared in a McNeill's leaflet from 1962: "McNeill’s were founded in 1837 and manufactured roofing felts and insulation materials. This 1962 leaflet is for the composite insulation material Slagbestos -- that didn’t contain asbestos, quite a rarity in such materials. Anyhow, what a cracking name!"

We haven't been able to trace down the original leaflet yet, but McNeill's was a real company and they truly did sell an insulation material called "Slagbestos." Architectural historian Miles Lewis mentions the company and its Slagbestos product:

Mineral wool became generally available in the 1870s. As a material for lagging boilers and steam pipes it is said to have been also produced in Wales from about 1840,39 but for practical purposes it was a much later development, and was reported to be a German invention of the 1870s. Slag wool was produced at blast furnaces in Osnabrück and Zwickau, by sending the blast of air or steam through the molten slag, producing a white material like spun glass. The maker was apparently Krupp, of Essen, and the material, known as Schlackenwolle, is said to have been of poor quality, and to have rapidly crumbled to powder. A type somewhat similar to the German wool was produced in the United States, as 'mineral wool' ...

The first reference to the use of slag wool in Australia was in 1887, when it was 'substituted for the usual pugging' in the floors, being placed upon light boards, presumably spanning between joists at some distance from the floor surface. The origin of the material used is unknown, but it is likely to have been British. By 1901 slag wool or 'silicate cotton' was being made by D Anderson & Son of London (apparently the successors of David Anderson of Belfast); J C Broadbent & Co Ltd, of Redcar and Hazlehead near Sheffield (who cited contracts going back to 1893); Frederick Jones & Co of London; and F McNeill & Co of London, with works at Kirkintilloch near Glasgow. By the 1920s McNeills manufactured 'Slagbestos', though it is unclear whether it in fact contained asbestos.

A number of images from Grace's Guide to British Industrial History also mention McNeill's patented "slag wool," which is an insulator or packing material also called "mineral wool" or "rock wool," and which is created using blast furnace byproducts: Either way, we wouldn't want it as a sandwich ingredient.