The group's statement sparked a wave of controversy on the Fourth of July. 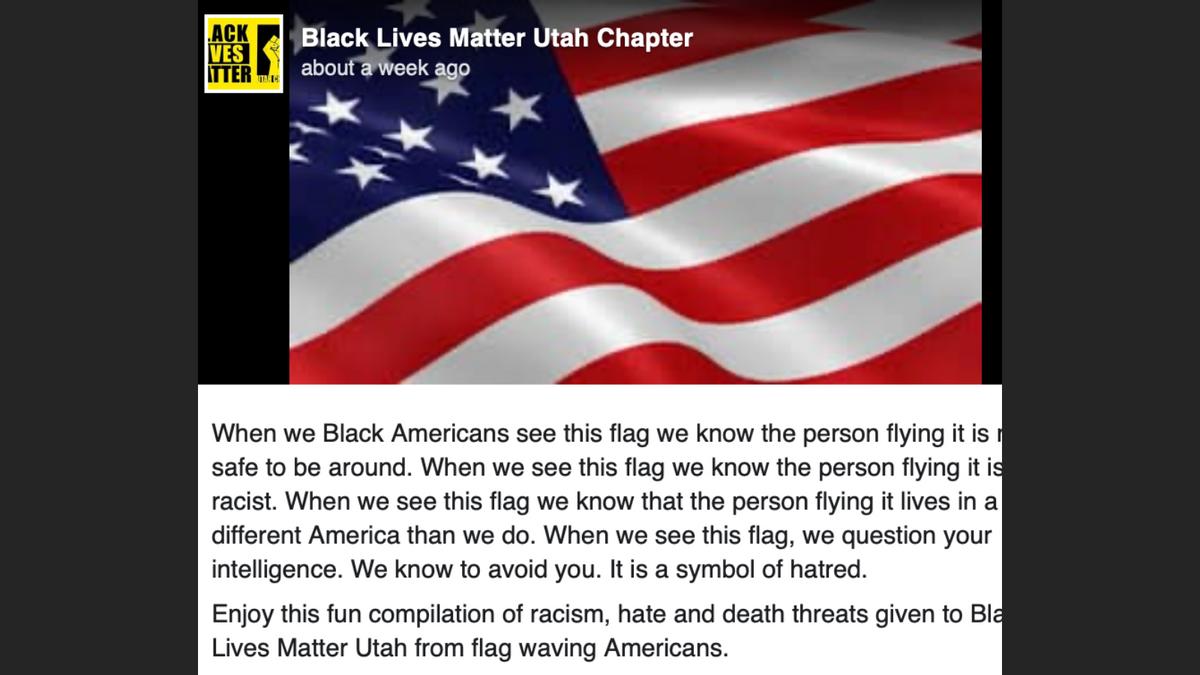 Claim:
On July 4, 2021, the Black Lives Matter Utah Chapter called the American flag a "symbol of hatred," and those who fly it racists.
Rating:

We found no evidence of other groups affiliated with, or representing, the Black Lives Matter movement taking a similar stance.

In July 2021, Snopes readers contacted us to determine the legitimacy of reports claiming an Utah group representing Black Lives Matter described the American flag as a "symbol of hatred," and called those who fly it racists, on the Fourth of July. The underlying claim was true, though some context is necessary to make sense of the group's role within the national Black Lives Matter movement — a decentralized effort to call attention to police brutality's disproportionate impact on Black Americans.

Firstly, below is a transcribed version of an authentic July 4 post by a Facebook group titled "Black Lives Matter Utah Chapter," which we also included as the feature image for this report.

“We are seeing that symbol used in every racist hate group’s messaging across this nation," Scott told the local newspaper. "I am telling you when I see an American flag, I begin to feel fear for the simple fact that every time I am faced with hatred, it is at the hands of someone carrying an American flag.”

In a statement on the group's website, Scott said again she stood by the sentiment, and shared dozens of voicemails and messages filled with racial slurs and threats from people condemning the post. "They are proving our point," the message read.

However, let us note here: The Facebook post went viral, in part, due to social media posts (like the one displayed below) that erroneously claimed all supporters of the Black Lives Matter movement believed in the Utah group's statement about the American flag. In reality, that was not the case. While it was true the Utah chapter called the flag a "symbol of hatred" and those who fly it racists, there was no widely-available evidence of other Black Lives Matter groups or like-minded activists making similar proclamations on the Fourth of July.

In fact, Jeanetta Williams, president of the NAACP Utah State Conference, condemned the above-transcribed post, writing in a statement to local media outlets:

"The NAACP ... rejects the idea that flying the American flag is a racist message," the statement read, according to The Salt Lake Tribune. "The flag stands for all the people who have lived and served to bring about the best of the American experience, that all people are created equal."

Furthermore, the Utah group was not formally part of the Black Lives Matter Global Network — the civil rights movement's parent organization that connects local chapters across the world with a political action committee and partnerships with corporations and politicians.

"We are an independent chapter," the website stated. "Each chapter of black lives matter has different objectives."

To conclude our analysis, we reached out to the Black Lives Matter Utah Chapter with a series of questions including whether it was aware of any other BLM groups or activists expressing similar statements and why it was not part of the broader network.

We have not received a response, but we will update this report when, or if, that changes.

In sum, we rate this claim "True" with the important caveat that Snopes found no evidence of other groups affiliated with, or representing, the Black Lives Matter movement taking a similar stance on the American flag.