Does a BLM Flyer Label White People the 'Enemy'?

A piece of racist propaganda was circulated in an attempt to smear the Black Lives Matter movement. 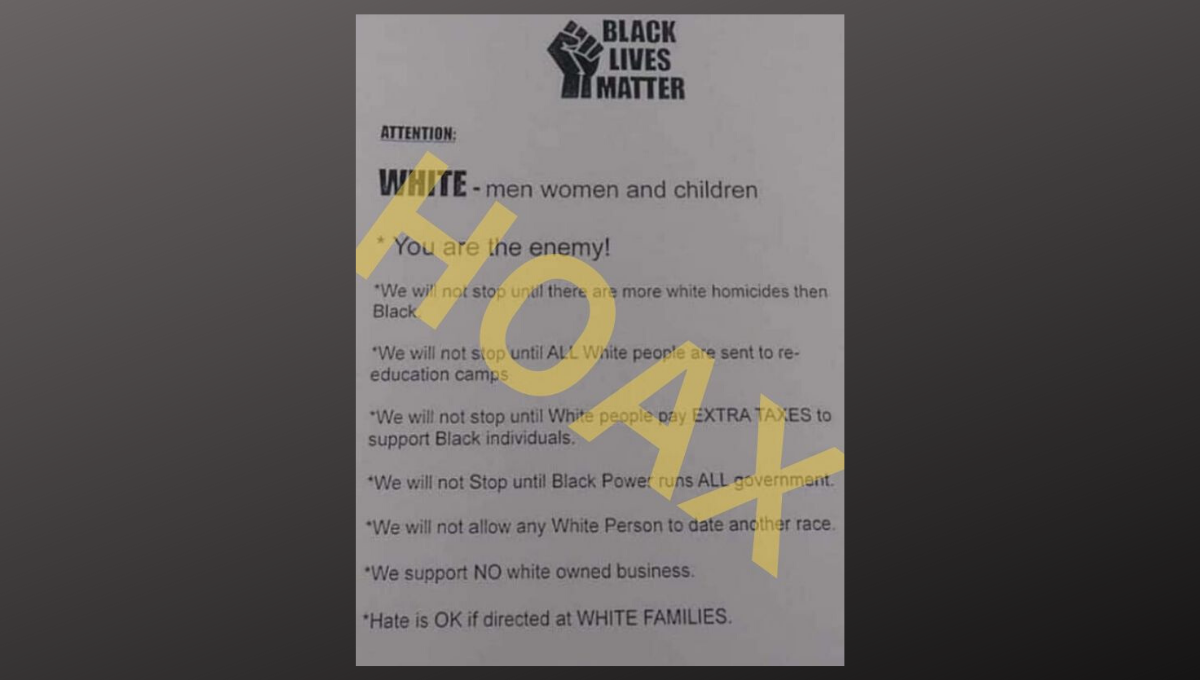 In the spring of 2020, as protests against racial injustice and police brutality swept across the U.S. following the death of a Black man in police custody, online trolls started to spread racist propaganda in an attempt to smear the Black Lives Matter movement. Generally speaking, these posts made inflammatory and violent claims, then falsely attributed them to BLM.

For example, one such hoax held that BLM protesters were going to "assassinate white families."

In June 2020, Snopes came across yet another flyer falsely attributed to Black Lives Matter that labeled white men, women, and children as "the enemy": But this is not a genuine flyer issued or endorsed by Black Lives Matter. This is a piece of racist propaganda that was created in an apparent attempt to smear BLM and heighten racial tensions.

It isn't clear who created this fake poster. The earliest posting that we could find was from June 11, 2020, from a Twitter account devoted to QAnon, a wide-ranging and far-right conspiracy theory based almost entirely on anonymous social media posts that claim a “deep state” plot exists against President Donald Trump. From there, it was shared to the Russian site Aftershock.news; an All Lives Matter account; and an account adorned with British flags, where it received thousands of retweets.

In addition to the fact that this flyer originated with posters critical of BLM — and not with BLM accounts spreading this message in earnest — the statements on this flyer are also contrary to the positions of the Black Lives Matter movement. Nowhere on the Black Lives Matter website are white people identified as "enemies," and the website is void of any calls to violence against white people.

BLM has also not called for "re-education camps," for "Black power" to run the government, or for white people to stop dating outside their race. The official Black Lives Matter website has put out a list of "demands," but that list has practically nothing in common with the viral hoax shown above. The official list from Black Lives Matter calls for an end to systematic racism and for the national defunding of police:

We call for an end to the systemic racism that allows this culture of corruption to go unchecked and our lives to be taken.

We call for a national defunding of police. We demand investment in our communities and the resources to ensure Black people not only survive, but thrive. If you’re with us, add your name to the petition right now and help us spread the word.

The "demands" on the hoax flyer did not originate with BLM. The items on this list are examples of what someone who is unfamiliar with the Black Lives Matter movement may fear are central tenets of this group.

Joy Gansh, a local BLM activist, believes the display was created by people trying to discredit the movement.

She said: “Things like that, after what happened with the George Floyd mural being defaced, I think that’s something that a white supremacist would put up to discredit us.

“Nobody that I’ve seen advocating for the BLM movement would think that that is appropriate. My personal opinion is that this is people being framed. This is a way to make us seem in the wrong.”

The art student, who plans to organise a BLM march in Dundee soon, believes that “white supremacists” are using false posters to encourage violence.

“People that hold those kinds of beliefs aren’t part of this movement,” she added. "This seems like a way to stop us in our tracks and make us seem violent so they can come back with violence. We aren’t here for violence, we’re just here for justice and equality in all aspects of life.”

This fake flyer, as well as similar items, have been pushed on internet forums such as 4chan in an explicit attempt to smear the Black Lives Matter movement. In one post, for example, a 4chan poster states that "people are falling for this [hoax flyer], let's kick it into overdrive." In another thread, users exchange various fake BLM posters and encourage each other to share them. In another thread, a user gives instructions on how to make and spread this racist propaganda:

The only thing maintaining the completely bizarre state of affairs the USA and the world is in right now is the fact that some white people still think they can be on the "right side of history" by kneeling for the Noseberg-controlled BLM movement. We can destroy their whole plan. Make propaganda posters and spread them around. If enough whites realize that blacks will never ever feel that anything is "enough", they'll abandon the movement. It'll crash and burn. CORRECTION [17 June 2020]: The original article misstated the date of publication of this image on the Russian site Aftershock.news. This image was posted to that site on June 12, not June 6, as originally stated.