Did a Black Teen Request to Be Tried As a White Man?

An unreliable website with a penchant for publishing clickbait and repackaged satire appeared to have tricked readers in the summer of 2020. 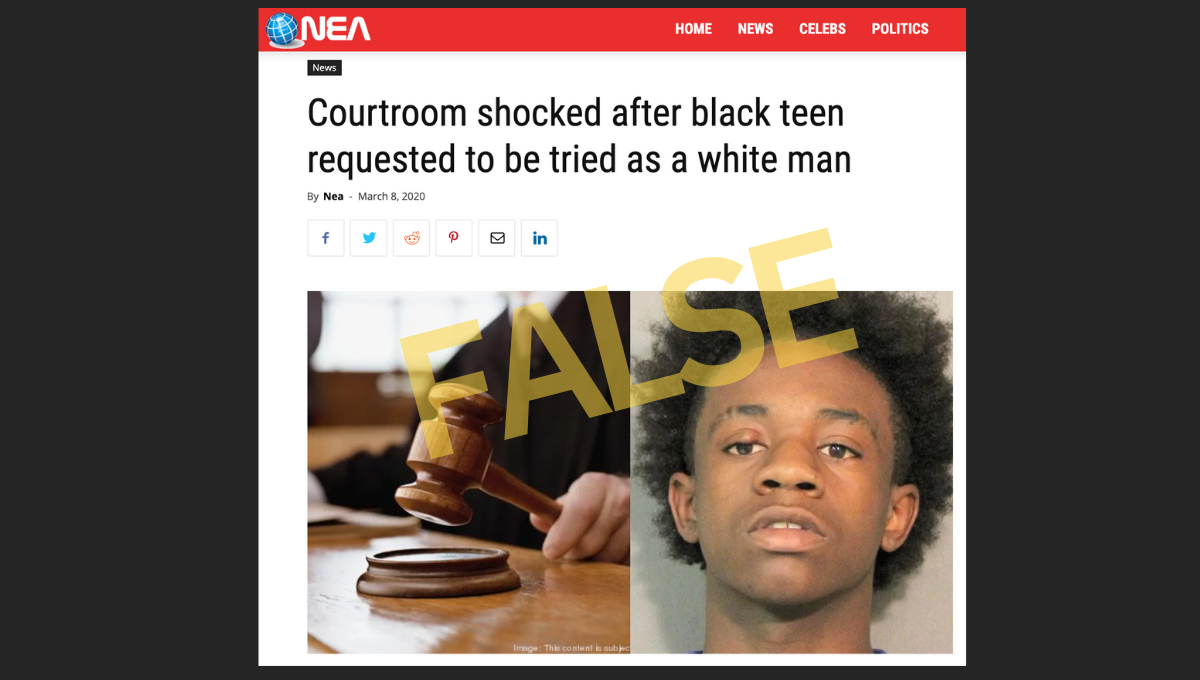 In the summer of 2020, a post swept across the internet that claimed a Black 19-year-old man had asked a court in Florida to try him "as a white man."

On Aug. 7, the website What You Expect? reported that:

"A courtroom in Tampa, Florida was shocked after a 19-year-old black teenager requested to be tried as a white teenager or at least a white man for him to stand a chance inside the courtroom. Sean Jackson was appearing in court for gun charges and refused to plead before the judge and jury accept his conditions. Jackson said he wanted to be tried as a white teenager and if they can’t give him that they should at least try his as a white man who has a similar record as him."

Two days earlier, the Oklahoma Eagle published an article with the same content. The original version of the "Sean Jackson" story appears to have been published in March 2020 by Global NEA. That post was illustrated with a booking photograph, creating the impression that the image was that of Jackson: In fact, the man shown in that photograph was Reginald Blanton, 18, who was wanted on suspicion of attempted murder in New Orleans in May 2019. We checked court records for Hillsborough County, Florida (where the city of Tampa is located), and found no record of any charges having been filed against anyone named Sean Jackson, in the period since the article was first published, in March 2020. The Global NEA article was a hoax.

Global NEA does not feature a disclaimer or a description of its output as satire, but it does frequently publish articles taken from Ihlayanews, a website that does label its articles as "satire."

Global NEA also appears to have a particular penchant for sensationalist and scatalogical articles, further diminishing its credibility as a source. Despite this lack of credibility, ostensibly serious websites like the Oklahoma Eagle appear to have mistaken the "Sean Jackson" story as being authentic.

Jones, Fred.  "Courtroom Shocked After Black Teen Requested to Be Tried As a White Man."   The Oklahoma Eagle.  5 August 2020.

GlobalNEA.com.  "Courtroom Shocked After Black Teen Requested to Be Tried As a White Man."   8 March 2020.