Did Bannon Say 'All Hell Is Going To Break Loose' Before Capitol Attack?

A number of false and fear-mongering theories about the 2020 election were pushed on Bannon's podcast in the days before the Capitol attack. 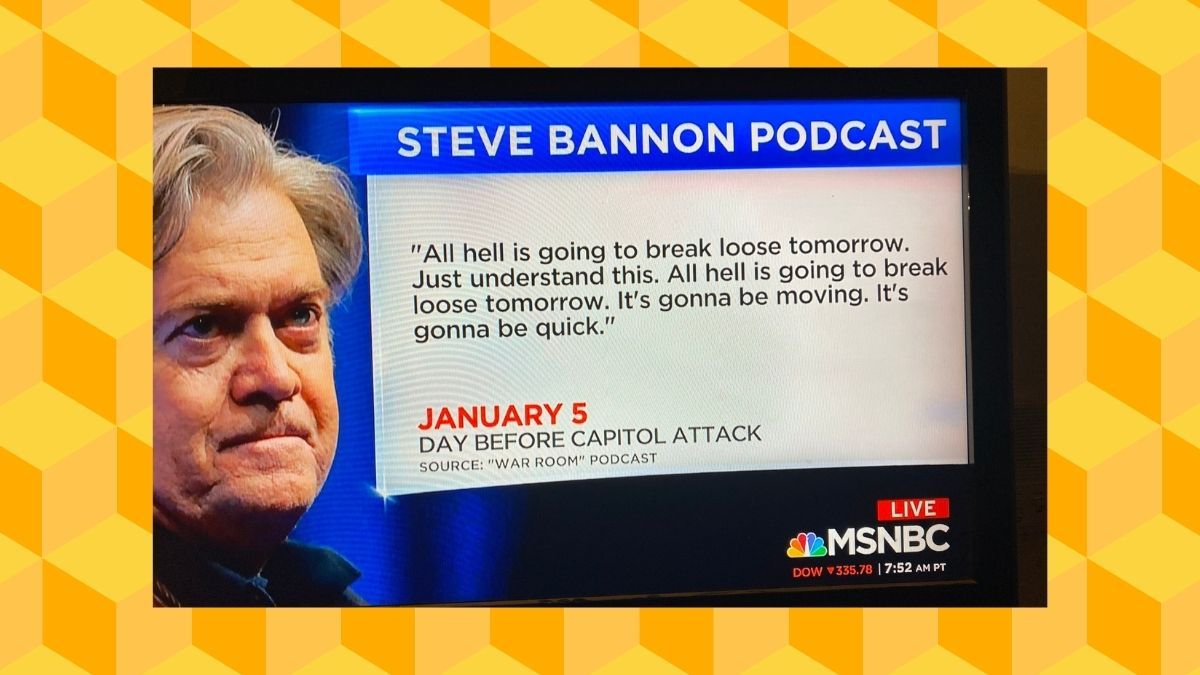 On July 29, 2021, a few days after four police officers testified before a bipartisan committee investigating the Jan. 6 attack on the U.S. Capitol, a quote supposedly spoken by former U.S. President Donald Trump's one-time chief political strategist Steve Bannon started circulating on social media, along with messages calling for the select committee to subpoena him:

This quote comes from an episode of "Bannon's War Room" that aired on January, 5, 2021, the day before a mob of Trump supporters stormed the U.S. Capitol in an attempt to prevent or delay the certification of then-President-elect Joe Biden's election victory. You can hear this quote for yourself at around the 29:30 mark of episode 631 of Bannon's War Room.

A number of news outlets reported on this comment from Bannon in the days following the attempted insurrection. CNN, for example, reported:

Even as anxious eyes turn toward the Inauguration Day on January 20, the words of these firebrands in the leadup to the riots at the Capitol raise crucial questions about the relationship between the rhetoric of far-right figureheads and the violence that unfolded on January 6.

The next day, Trump himself gave a rambling speech near the White House where he claimed the election “was stolen from you, from me and from the country,” and called on supporters to “walk down to the Capitol.”

He added: “So many people said, ‘Man, if I was in revolution, I would be in Washington.’ Well, this is your time in history.”

And: “It’s all converging, and now we’re on the point of attack tomorrow. … And all I can say is: Strap in. You have made this happen, and tomorrow it’s game day.”

These quotes come from episode 631 of Bannon's War Room, an episode that featured an appearance from Trump's former lawyer Rudy Giuliani. Bannon purported to be responding to the "breaking news" that Senator Chuck Grassley, and not Vice President Mike Pence, would be presiding over the certification of the election vote.

This, of course, didn't actually happen. The idea that Pence could reject the ballots was a major talking point among Trump's supporters (including those on "War Room") in the days leading up to the Capitol attack, despite the fact that Pence simply did not have the authority to do so.