Did 480-Pound Annabelle Gaston Accidentally Kill Her Husband During Sex?

A piece of fat-phobic fiction originated from a website that labels itself satirical. 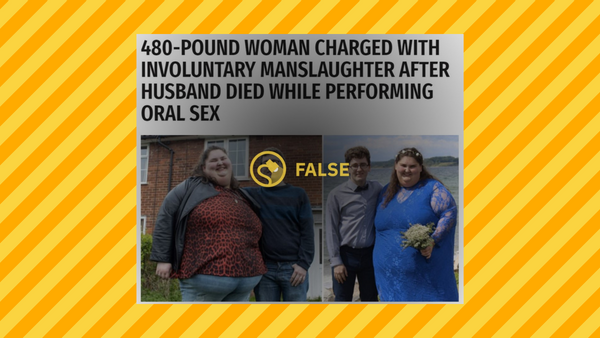 Claim:
A 480-pound woman, Annabelle Gaston, was arrested on suspicion of involuntary manslaughter after she suffocated her husband during sex.
Rating:

In October 2019, the satire website World News Daily Report published a fictitious article about a 480-pound woman, Annabelle Gaston, who was charged with involuntary manslaughter after she accidentally suffocated her husband, Irvin Gaston, during sex. An Ohio woman has been sentenced to involuntary manslaughter after her spouse was found dead minutes after he had performed oral sex onto her.

Annabelle Gaston, 28, was arrested last year after calling 911 when her husband, Irwin Gaston, 31, had a cardiac arrest while apparently being suffocated to death.

This not a genuine news article but a piece of fiction from a website that has previously published junk news stories about gold-plated genitals, a man who got into a bunch of car accidents after receiving a brain transplant from a woman, and a priest who had a crucifix removed from his rectum.

In November 2021, this story about "Annabelle Gaston" was rehashed by a number of tabloid-esque websites, such as celebsaga, celebpie.com, and socialtelecast.com, who published articles that purported to flesh out the details of this odd homicide. One article, for example, was titled "Who is Annabelle Gaston? 480 Pounds Woman Charged With Manslaughter - Everything To Know."

The case of Gaston became quite notorious given its rarity. A death was involved in her case after her husband performed oral sex on her. He passed away due to suffocation after he got stuck on Gaton's genitals.

There is no truth to this story — the details were made up out of whole cloth by a satire website. Furthermore, the included pictures do not show "Annabelle and Irvin Gaston" but Amalie Jennings and her husband, Sean, a couple who live in the United Kingdom.