The video was uploaded on Dec. 30, 2022, with the title, "Andrew Tate TROLLS Interviewer After Getting Released From Jail." 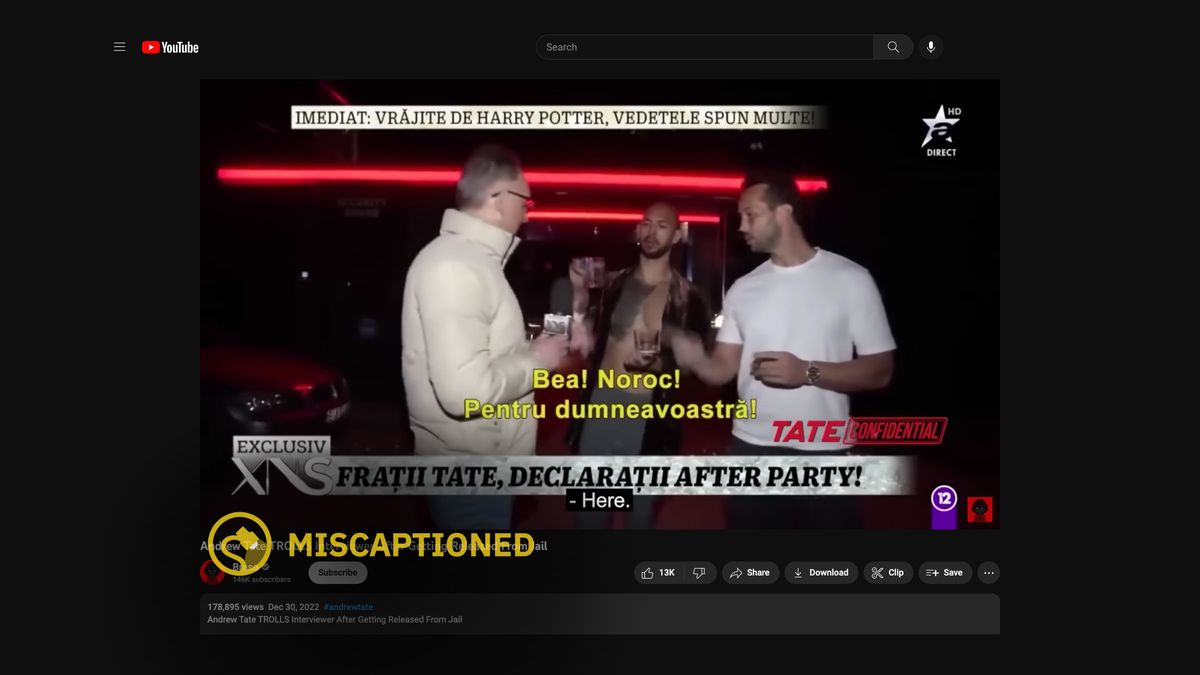 Claim:
A video shows Andrew Tate trolling a reporter following his arrest and release from jail in late 2022.
Rating:

On Dec. 30, 2022, a YouTube user uploaded a video with the misleading title, "Andrew Tate TROLLS Interviewer After Getting Released From Jail."

The video's title referred to Andrew Tate, a divisive social media personality and former professional kickboxer, who along with his brother Tristan had just been arrested in Romania on the previous day on charges of human trafficking and rape, according to The Associated Press.

The video was viewed around 200,000 times in the seven hours after it was posted. It showed the Tate brothers trying to offer a reporter and camera operator glasses of vodka in exchange for doing an interview. The journalists refused the drinks.

The YouTube video's title coupled with the timing of its upload misled some viewers to believe that the footage was new and that it showed the Tate brothers following the arrest.

However, the Tate brothers had not been released following their December 2022 arrests, as we previously reported. Hours after the video was posted, a judge decided that they be remanded to jail for 30 days.

Further, the video was at least months old by that point, as evidenced by previous uploads of the same clips on TikTok.

The misleading YouTube video's description mentioned, "This is some hilarious footage from Andrew's arrest back in April." But in order for viewers to notice that sentence, they needed to click "show more."

The reference in the video's description to the month of April apparently had to do with the fact that Tate's home was raided by Romanian authorities on April 11, 2022. However, we found no reporting that said he had been arrested at the time, despite what the YouTube video's description had misleadingly claimed.

It's unclear when exactly the video was recorded, but the events shown in the footage happened long before the Tate brothers' December 2022 arrest.