Is This Anderson Cooper Standing in a Ditch While Reporting Hurricane Florence?

It's not uncommon for reporters to call upon dramatic skills in the course of conveying the perils of extreme weather phenomena. 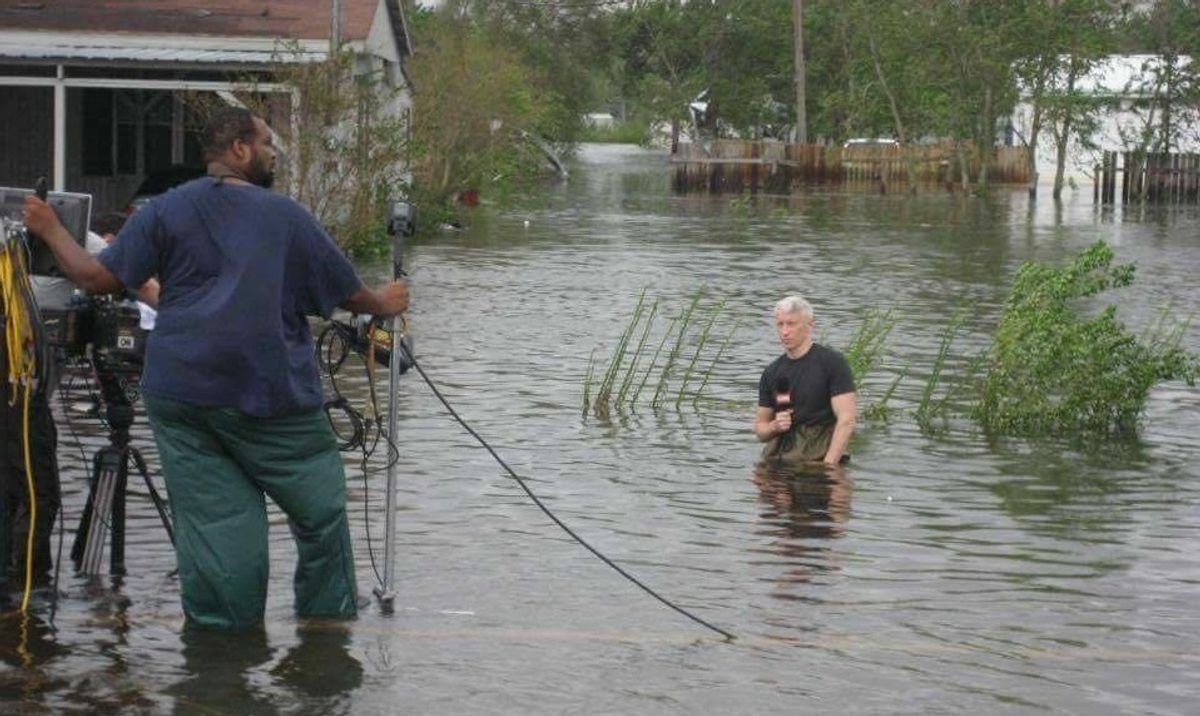 When Hurricane Florence hit the Carolinas in September 2018, it brought the spectacle of a Weather Channel reporter seemingly engaging in a bit of staged acting to exaggerate the strength of winds for dramatic effect (as seen in the bottom right-hand square below).

It also brought similar online claims that CNN's Anderson Cooper had deceptively reported on the hurricane while standing in a ditch, creating the misleading impression that he was filming amidst waist-deep floodwaters -- as his camera crew stood out of frame a few feet away in waters that barely reached above their ankles: But as some viewers recalled, the pictures of Cooper dated from ten years earlier, during the aftermath of Hurricane Ike, and had nothing to do with Hurricane Florence:

It was actually from a special that he ran the day after Hurricane Ike. He is standing in a ditch and during the special he also walked around in order to show the variations of depths in the water. Even if that wasn't what he was doing EVERYONE looks for the best shot!

That timing was corroborated by websites with archived information and clips from a September 2008 edition of "Anderson Cooper 360" which featured multiple reporters capturing sights from around Texas on the day after Hurricane Ike, including Cooper himself at one point standing in waist-deep water.

However, the various available clips of the program document that the waters in the immediately surrounding area were both fairly deep and quite variable. As Anderson noted during that broadcast, his taking two steps backwards from where he was standing would have caused him to sink in neck-deep water:

Cooper also noted that the floodwaters had actually receded significantly before he began his report, and that although he could have stood in a higher-level adjacent roadway where he might have remained drier, he would have risked interfering with emergency vehicles and others attempting to traverse flooded roads.

So while Cooper might have been able to find a somewhat drier spot to report from and instead chose one that provided a visually dramatic appearance, he wasn't misrepresenting or "lying" about the general state of the flood as seen in the finished program. And his positioning seems "fake" only when contrasted with that of the camera crew's, who obviously could not operate under the same conditions as Cooper and had to be situated either on higher ground or on platforms that kept them and their equipment above water.

On the 17 September 2018 edition of "Anderson Cooper 360," Cooper went over the coverage in question point-by-point and explained in detail the circumstances and the reasoning behind the coverage choices made: