Is This a 1918 Quarantine Ad for the Bell Telephone?

We'll say this much: This is a real advertisement from the New York phone company. 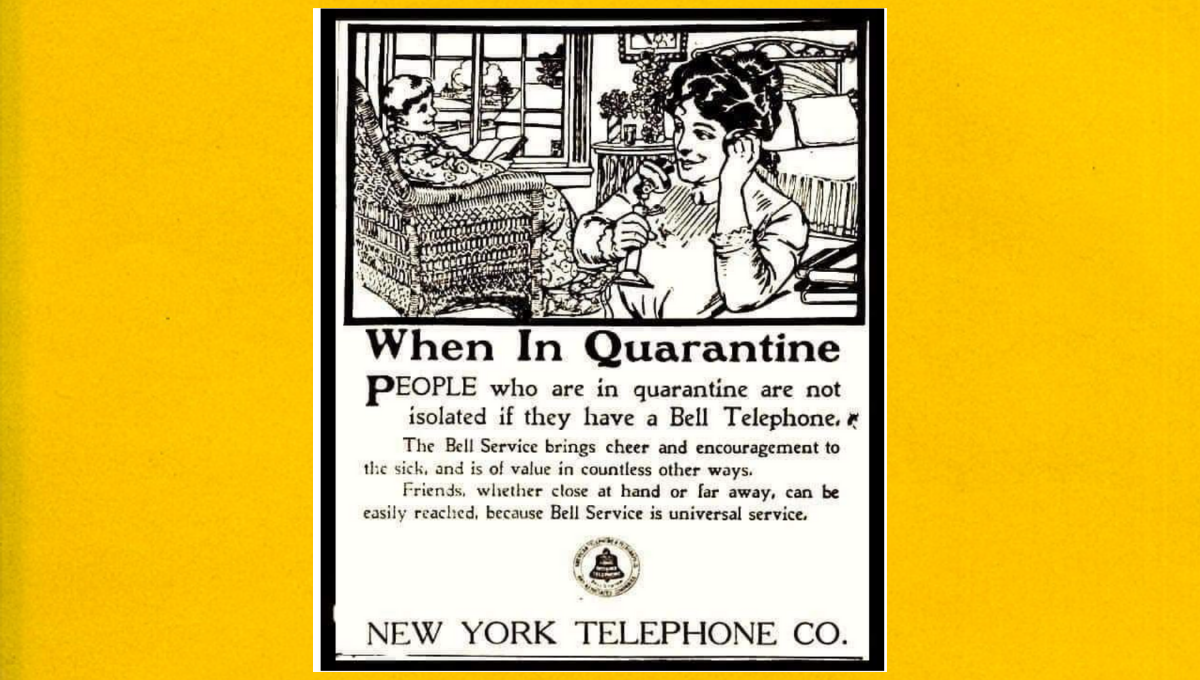 Claim:
A picture shows a 1918 advertisement touting the benefits of the Bell Telephone for maintaining relationships while people were under quarantine during the "Spanish flu."
Rating:

A 1900s advertisement from the New York Telephone Company touted the Bell Telephone as a way to maintain social relationships with people who were in quarantine due to illness.

However, this advertisement predates the so-called "Spanish Flu" (1918) by roughly eight years.

In May 2020, as much of the United States was dealing with the COVID-19 coronavirus disease pandemic by self-quarantining, an image started circulating on social media. It supposedly shows an advertisement from the New York Telephone Company that touted the Bell Telephone as a way to maintain relationships with people who were in isolation due to the so-called "Spanish Flu." One posting of this image from Reddit was accompanied by a caption that noted history really does repeat itself:

An add [sic] during the 1918 Spanish Flu and here we are approximately 100 years later. History does repeat itself. People who are in quarantine are not isolated if they have a Bell Telephone. The Bell Service brings cheer and encouragement to the sick, and is of value in countless other ways. Friends, whether close at hand or far away, can be easily reached, because Bell Service is universal service.

This is a genuine advertisement from the New York Telephone Company touting the benefits of a phone to maintain social distancing. However, the ad was first published several years before the outbreak of the Spanish flu.

Here's a version of this advertisement published in the St. Louis Post-Dispatch on Nov. 17, 1910: 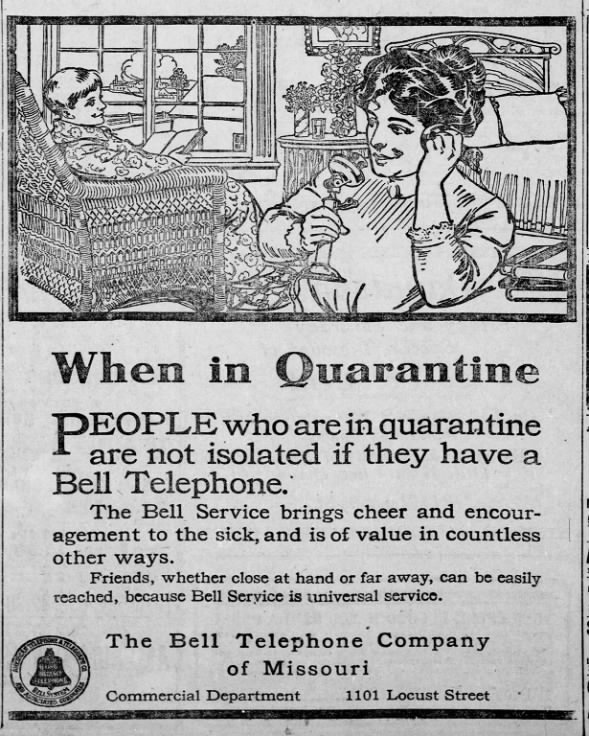 The ad doesn't appear to refer to any specific city-wide quarantines put in place to deal with any illness. Rather, it appears this ad was targeting individuals who may know someone who was being kept in isolation, possible due to a contagious disease such as smallpox, leprosy, or cholera. Newspaper clippings at the time also reveal several instances of local quarantines that were implemented to contain various outbreaks.

In 1900, for instance, the "San Francisco plague," an outbreak of bubonic plague in California, resulted in quarantine restrictions as far away as Texas. In 1903, the New York City Department of Health opened a quarantine facility to isolate tuberculosis patients. In 1910, when this advertisement first appeared in the St. Louis Dispatch, officials in the Missouri city were asking people to quarantine after multiple cases of scarlet fever were found at one of the city's schools.

While this advertisement was created before the Spanish flu (a misnomer for the 1918 flu pandemic), we have little to quibble with the observation that "history repeats itself." For instance, as this ad suggests, phones helped to maintain social relationships with individuals separated by illness, and in 2020, video-conferencing apps saw a big increase in use for the same reason.