"The Kiss Hello" aired in 1995 during "Seinfeld's" sixth season. 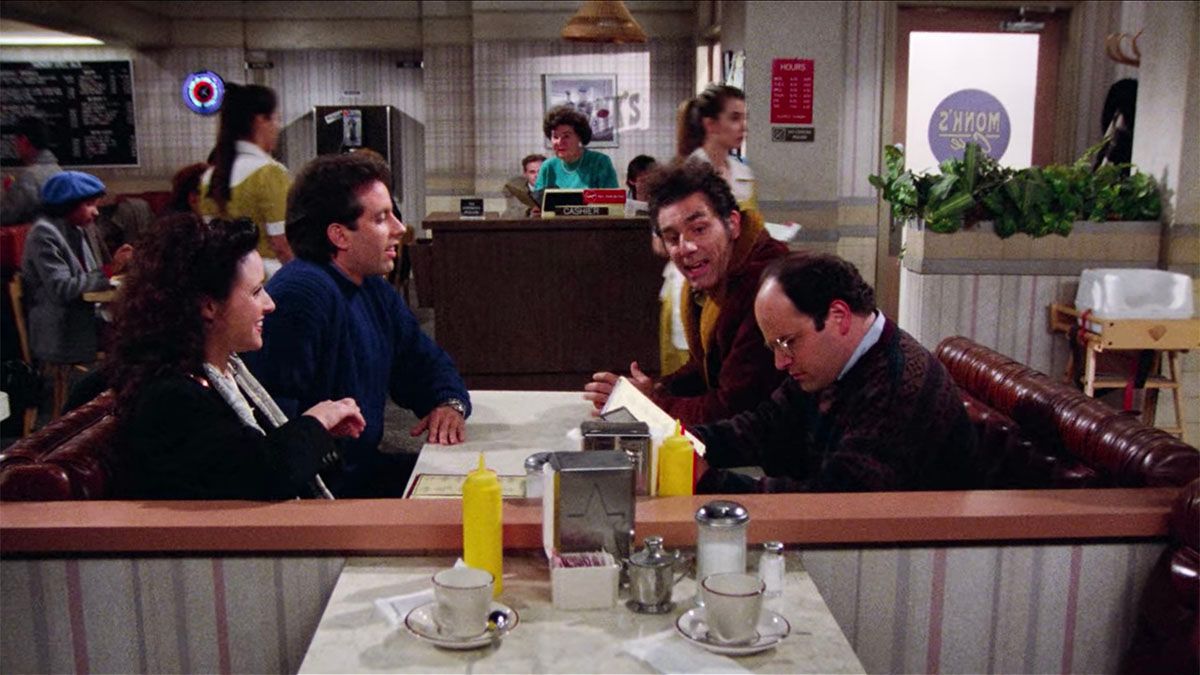 It's not every day that "Seinfeld" fans get to hear about a new secret from the set of the Emmy Award-winning NBC television show. While the piece of information itself was 27 years old, it was a fresh behind-the-scenes moment when it was revealed in February 2022, just months after the show arrived on Netflix.

The "Seinfeld" secret came from Carol Leifer, a writer and executive story editor for the show. (It's been written about before that at least part of the inspiration for the character Elaine Benes purportedly came from Leifer's own life.)

In the episode "The Kiss Hello," which aired in 1995, Leifer had an onscreen role as an unnamed receptionist in a physical therapist's clinic. Part of the plot from the episode was described like this:

Walking down the street, Jerry Seinfeld (himself) and George Costanza (Jason Alexander) meet Elaine Benes (Julia Louis-Dreyfus) and her friend Wendy (Wendie Malick), a physical therapist. Jerry regrets once kissing Wendy on the cheek because now he has to kiss hello every time. George asks Wendy for treatment for a sore arm.

Later, they discuss Wendy's 1960s-style hairdo that Elaine wishes she would change. Because only the bluntly frank Kramer would dare comment on it to her directly, they introduce him to her. However, Kramer loves the haircut and tells her so. Flattered, Wendy starts dating him.

At Wendy's clinic, George is angry at her because he gets charged for an appointment he missed due to a family emergency, because of her 24-hour cancellation policy.

Leifer's receptionist character shows up in the scene where Costanza is told he owes payment for a missed appointment. The cancellation policy, a business practice that many readers might be familiar with in their own towns, ends up annoying Costanza, who didn't want to pay for a visit he didn't show up for. He's notified of the larger invoice by Leifer's character after handing her a check for a smaller amount of money, as seen in the first part of this video:

This is where the behind-the-scenes "Seinfeld" secret comes in.

On Feb. 17, 2022, Leifer posted a "throwback Thursday" on Instagram, revealing that Alexander tried to get her to laugh and break character by writing "something crazy dirty" on checks passed to her during multiple takes:

Little story… When Jason Alexander wrote a check to me in that scene, he wrote something crazy dirty to try and break me up. And with each take, the checks got filthier and filthier! Still surprised to this day that I never lost it! ???

The "click" referred to by Leifer was a special character quirk she said she added to perhaps make the receptionist a bit more annoying to Costanza and viewers:

Costanza eventually does the cheek "click" back to her later in the episode, making for a satisfying moment for viewers.

In addition to "The Kiss Hello," Leifer also had an onscreen role in the episode, "The Invitations." She had a quick line and played a bank employee. This scene from "The Invitations" also starred accomplished actor Stephen Root, who is sitting on the left side of the shot. (Courtesy: Netflix)

For further reading about the show, we previously looked into whether Seinfeld's apartment and hallway were physically possible due to the way the set was laid out.