Could Jerry Seinfeld's Hallway Exist in the Real World?

If this conundrum blows your mind, do not, under any circumstances, research who played Jerry's and George's fathers in season one. 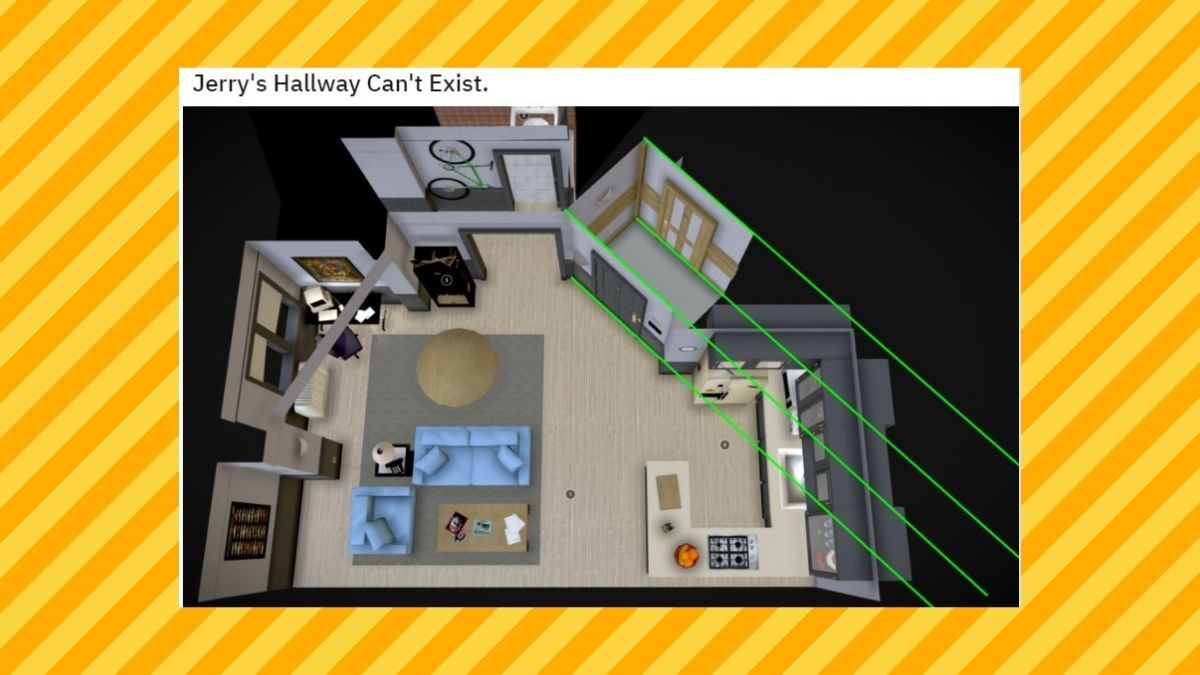 In April 2021, more than 20 years after the final episode of "Seinfeld" aired in 1998, the dimensions of Jerry Seinfeld's apartment building became a hot topic on the internet. This conversation was sparked in large part by a diagram that supposedly showed how the hallway outside of Seinfeld's apartment could not exist: Generally speaking, this is an accurate depiction of the physical impossibilities of Seinfeld's apartment. However, a case can be made that the hallway outside of Seinfeld's apartment wasn't as straight as it is shown here. Furthermore, the dimensions of this hallway changed during the nine seasons of "Seinfeld," indicating that this entire discussion may be moot.

Before we get into the dimensions of this fictional New York apartment building, it should be noted that Seinfeld was generally not filmed on location. In fact, the exterior shots of Seinfeld's apartment building weren't even filmed in New York (they were filmed in Los Angeles). While it is certainly not physically possible for Jerry to be in New York while inside of his apartment and in Los Angeles while outside his apartment, we're not sure if this ruins the "reality" of this fictional show. TVs and movies are often filmed in locations that do not literally match their stories. Director Peter Jackson did not simply walk into Mordor to film "The Lord of the Rings," for example. He went to New Zealand.

Seinfeld was largely filmed on a variety of studio sets built at CBS Studio Center in Studio City, California. Pedantically speaking, Seinfeld's apartment didn't even have a ceiling.

(Side note: This image features another oddity of Seinfeld's apartment. The wall on the right is never, or rarely, featured on the show. In the fictional Seinfeld-verse, this wall may as well not exist.)

The claim that "Jerry's Hallway Can't Exist" is supported by "Seinfeld" scenes that appear to show a long, straight hallway that ends with Jerry's door on one side and Kramer's door on the other. Here's one look at the hallway from the episode "The Apartment" in season 2: While this view indicates that the hallway outside of Seinfeld's apartment would be impossible, as it would seemingly run straight through the kitchen, this is not the only glimpse of the hallway that we get throughout the show's run.

While most hallway scenes took place directly in front of Jerry or Kramer's doors, the episode "The Strongbox" in the ninth and final season gave a relatively clear look at the dimensions of this hallway. But instead of a long hallway extending from Jerry's door (as depicted in the "Jerry's Hallway Can't Exist" image), a second hallway can be seen in the frame that runs perpendicular to the original hallway.

Here's a shot of Jerry talking to his neighbor Gabriel: And a wider shot showing Jerry and Kramer standing at this hallway intersection: While this may ruin the "reality" of this fictional show for some viewers, we'd remind them that "Seinfeld" was filmed on a studio set and Jerry's apartment did not have a ceiling, a fourth wall, and was lined with cameras and a live studio audience. In other words, if you can accept that Seinfeld is surrounded by invisible people who constantly laugh at his jokes, the fact that the exterior of his apartment doesn't exactly match the interior of his apartment shouldn't be that much of a stretch.

A number of people have attempted to recreate the layout of Seinfeld's apartment. Here are some of our favorite renderings. (Click on the image for a larger view): So could Jerry Seinfeld's hallway exist? In reality, probably not.

The angle of the door entering Seinfeld's apartment and the location of his kitchen don't appear to match with most shots from the hallway. But in the fictional Seinfeld-verse, where one readily accepts that Jason Alexander is George Costanza and that Julia Louis-Dreyfus is a bad dancer, absolutely. It's simply a magical hallway that bends to the realities of the storyline.

Here's a video of set designer Thomas Azzari talking about his work on "Seinfeld." Azzari reportedly addresses the oddities of the hallway on the DVD commentary, but we have not yet been able to review a copy.