If the "freedom convoy" is as big as people say it is, why are so many videos being miscaptioned to exaggerate its size? 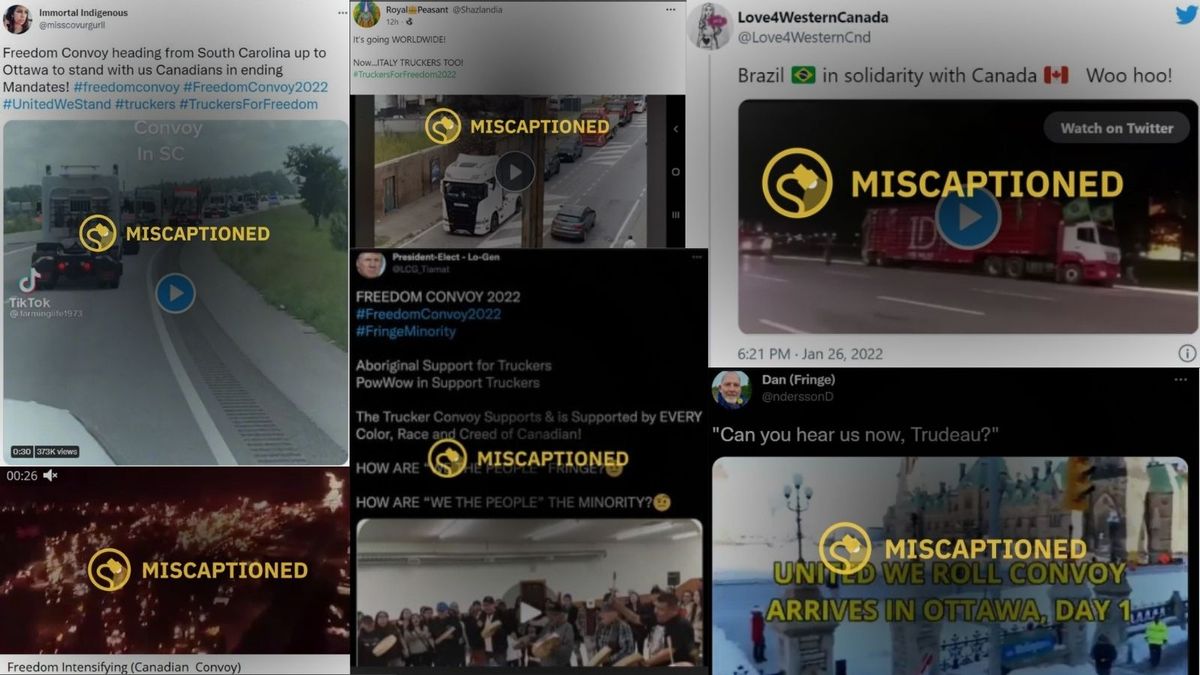 Since mid-January 2022, a number of trucks in Canada have participated in a so-called "freedom convoy" to protest against the country's requirement for cross-border truckers to be vaccinated against COVID-19. While this protest is genuine, several social media users have embellished the size (and global appeal) of the convoy by sharing miscaptioned videos online.

One persistent claim on social media was that truckers from the United States and other countries were holding their own "freedom convoys" to support the truckers in Canada. The following video, for example, was shared by many as if it showed truckers in South Carolina making their way up to the Canadian border. This video has nothing to do with Canada's trucker convoy. It was taken in August 2021 and shows a truck convoy in support of the Special Olympics.

Another video purportedly showed a group of truckers arriving in Ottawa on the first day of this protest. This video, however, was more than two years old when it was reposted with this false caption. Reuters reported: "The miscaptioned clip shows footage from a the “United We Roll convoy” in 2019 against the federal government’s energy and environmental policies. Canadian outlet CBC News reported at the time that nearly 200 trucks were part of the convoy that arrived in Ottawa on Feb. 19, 2019."

Another video was shared as if it showed truckers in Italy conducting their own "freedom convoy." Again, this video was miscaptioned. While this video shows a similar protest (truckers against COVID-19 vaccination requirements) it was taken in September 2021 and is unrelated to the Canadian convoy.

While the majority of videos that were miscaptioned in support of the freedom convoy featured images of trucks, some videos were miscaptioned in apparent attempt to exaggerate the international support this protest was receiving from a more diverse crowd. One video, for example, was shared as if it showed a "powow" from "aboriginal" people in support of the freedom convoy, but that's not the case. This video was taken in 2018 and shows a round dance ceremony in Frog Lake, Alberta.

A blurry video supposedly showing hundreds of trucks on a highway in Canada has also been shared online. Again, this video is years old and has nothing to do with the freedom convoy. This video dates back to 2019 and has nothing to do with the COVID-19 pandemic or vaccine requirements. It shows a group of farmers protesting new agriculture rules in Germany. This is at least the second time that this video has been miscaptioned as a COVID-19 vaccine protest. In December 2021, the AFP wrote:

A video has been shared repeatedly in multiple Facebook posts that claim it shows a protest against the German government's "medical tyranny" in December 2021. The claim circulated online after Germany imposed sweeping curbs on people not vaccinated against Covid-19. However, the claim is false: the video shows German farmers protesting in Berlin in November 2019 over new agricultural rules.

Did Brazil Join the 'Freedom Convoy'? No.

In another attempt to disingenuously grow the convoy's global appeal, a video from May 2021 was miscaptioned and shared as if it showed truckers in Brazil showing support for truckers in Canada. This video has nothing to do with the 2022 Canadian convoy. According to Reuters, this video comes from a May 2021 rally in support of Brazilian president Jair Bolsonaro. This is not true. To date, the freedom convoy has not been recognized by Guinness World Records as the world's largest convoy. All available evidence suggests that convoy consists of a few thousand trucks, at most.