About That Mall of America 'Jesus Saves' Shirt Video

We looked for the facts behind a viral video that showed a man wearing a "Jesus Saves" shirt with the word "coexist" crossed out on the back side. 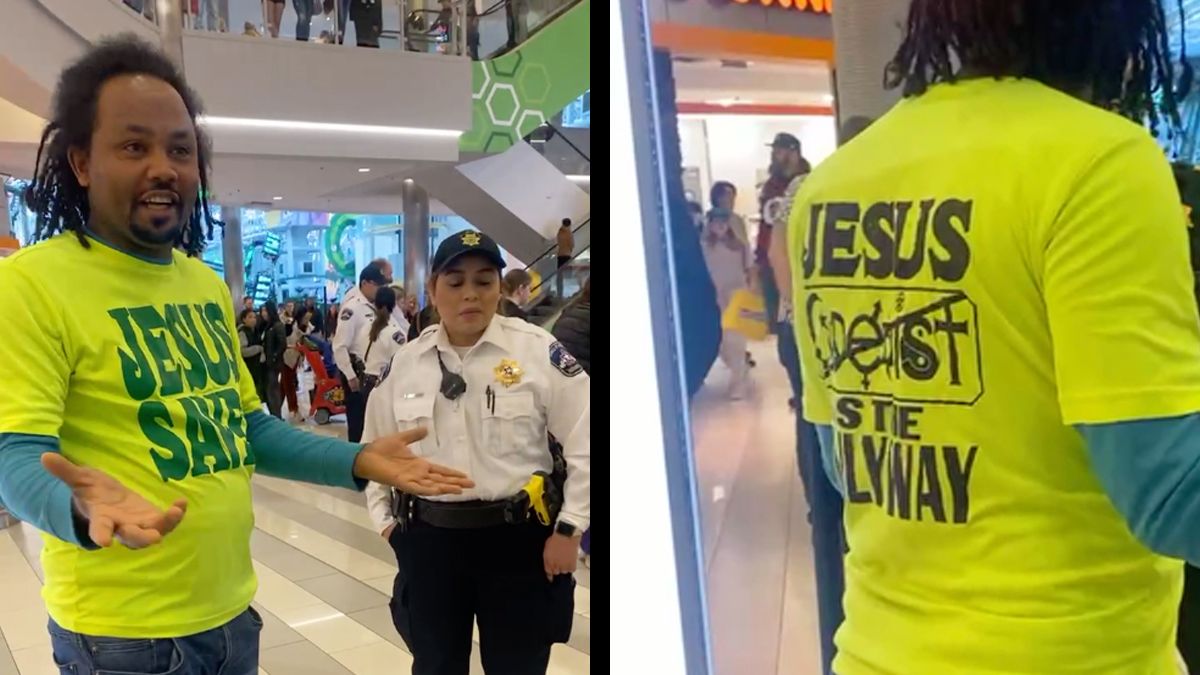 On Jan. 16, 2023, the conservative news website The Blaze published a story with the headline, "Video: 'Jesus Saves' shirt is 'offending' Mall of America shoppers, security guard says — and he orders man to remove shirt or get out of the mall."

After spending time researching this incident and corresponding with public relations personnel for Mall of America, as well as listening to the man's own words in a lengthy interview, we concluded that this story from The Blaze was missing at least one key piece of information.

That missing detail: This was not the first time the man, who later said he had been passing out "gospel tracts" to mall guests on a daily basis, had been approached by security officials to be informed of the company's rules on solicitation.

Mall of America is located in Bloomington, Minnesota, just a few miles south of Minneapolis.

According to the mall's website, the massive shopping center opened in 1992, attracts an average of 40 million visitors per year, and generates nearly $2 billion each year in economic impact for the state.

Relevant to this story is the fact that the mall's website includes a security page that shows policies regarding solicitation on company premises.

This story involves two videos. First was the viral video that appeared to receive more shares than the second video, as mall noise made it more difficult to hear conversation in the latter.

A second video was streamed to Facebook Live, which showed one of the security officials fist-bumping the man at the end of the clip:

The man in the video who was wearing the "Jesus Saves" shirt was later identified in a YouTube interview as Paul Shoro. During the interview, he said he was originally from Ethiopia.

It's true that in the viral video, a Mall of America security official could be heard telling the man in the "Jesus Saves" shirt that, "Jesus is associated with religion and it's offending people."

Shoro responded that he didn't say anything to anyone and that he was just walking.

While the front of the man's shirt did show the words, "Jesus Saves," the back of the shirt read, "Jesus is the only way," and included the crossed-out word "coexist."

The word "coexist" was a reference to the bumper stickers sometimes seen on cars that are meant to "embrace tolerance for all belief systems," according to one definition found online. The word's seven characters are formed with various religious symbols that resemble the shapes of the corresponding letters, rather than using just normal letters.

While The Blaze did include within the body of its story information about the word "coexist" being crossed out, this key detail was absent from its headline, subheading, and the two-picture image that appeared when the article was shared on social media.

Note: In 2018, KQED published an article about social media shares, which was titled, "People Don't Read Everything They Share Online ... and That's a Big Problem."

A key piece of information that was completely missing from the story that was published by The Blaze was the fact that Shoro had been given at least two 24-hour trespass notices in the days and weeks prior to Jan. 7, when the viral incident occurred.

Following the posting of the viral video, Shoro participated in a video interview that was published on the Kingdom Bizness YouTube channel.

Shoro and the YouTube user, Kingdom Bizness, then discussed a fatal shooting that occurred at the mall on Dec. 23.

Shoro then said, "If they didn't suspend me, if they didn't stop me from preaching and spreading the gospel of Jesus Christ, the shooting would not have happened."

By email, Mall of America public relations personnel confirmed key details of this story, passing along the following statement:

The guest referenced in the video was approached by Mall of America security on Jan. 7, 2023. One week prior, he was issued a 24-hour trespass for soliciting guests. After a brief interaction, the guest was not required to change his shirt and was allowed to remain at the mall.

The mall told us that Shoro had not, in fact, been kicked out following the recording of the viral video. We noted that the Daily Mail tabloid published the opposite in a headline, which read, "Mall of America preacher kicked out by security guards for wearing a 'Jesus Saves' T-shirt says he'd rather 'go to jail or die' than take it off."

The article from The Blaze also mentioned that, as a way of supporting Shoro and standing up to the mall, a local Facebook group named Bloomington Patriots was organizing a gathering inside the shopping center for Feb. 4.

According to the Facebook post, users were asked to wear shirts mentioning Jesus for an event called, "JESUS GOES TO THE MALL."

This story will be updated if further details come to light.

About | Mall of America. https://www.mallofamerica.com/about.

Kelly, Helena. "Man in Jesus Saves T-Shirt at Mall of America Told to Take It Off." Mail Online, 16 Jan. 2023, https://www.dailymail.co.uk/news/article-11641123/Man-wearing-Jesus-Saves-t-shirt-Mall-America-ordered-leave.html.

Urbanski, Dave. "Video: 'Jesus Saves' Shirt Is 'Offending' Mall of America Shoppers, Security Guard Says — and He Orders Man to Remove Shirt or Get out of the Mall - TheBlaze." The Blaze, 15 Jan. 2023, https://www.theblaze.com/news/video-jesus-saves-shirt-is-offending-mall-of-america-shoppers-security-guard-says-and-he-orders-man-to-remove-shirt-or-get-out-of-the-mall.