We reviewed raw video from before, during, and after former U.S. President Donald Trump's speech to examine this matter. 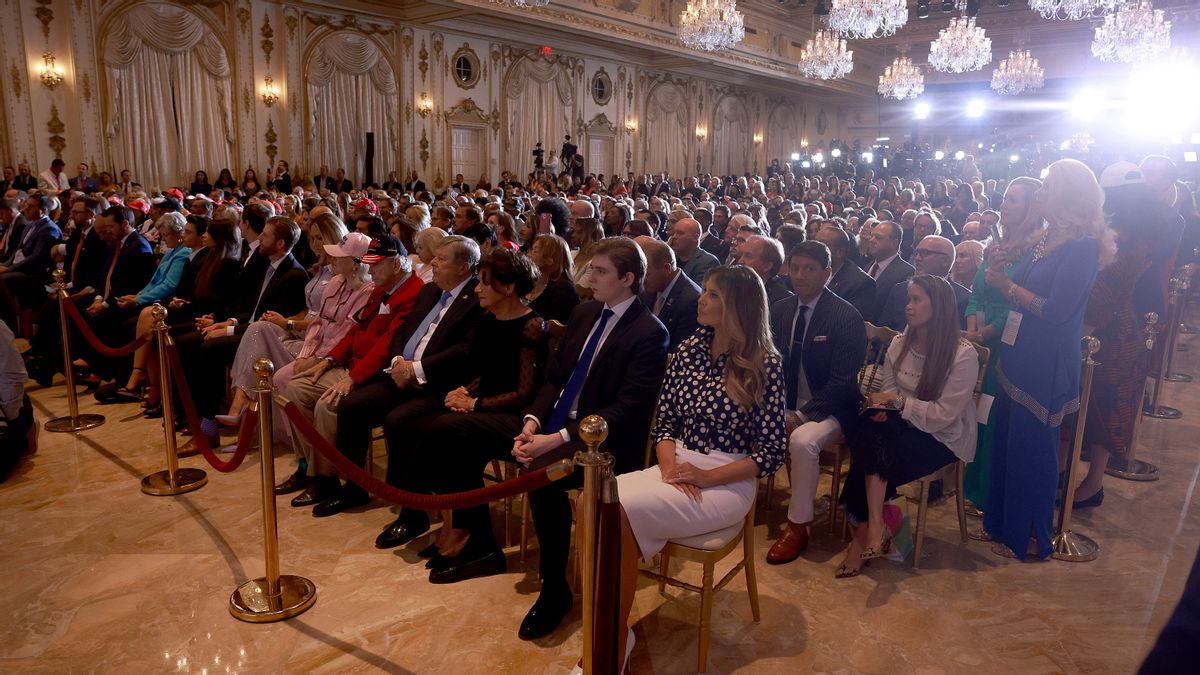 On Nov. 15, 2022, ABC News reporter and producer Olivia Rubin tweeted a video with the caption, "A crowd has formed by the exit of the ballroom as some try to leave Trump's announcement speech before he has finished…. But security won't let them." The tweet said that some people in the crowd were trying to leave early while former U.S. President Donald Trump was still finishing the announcement of his 2024 reelection campaign.

Rubin's video did appear to show that a very small number of people may have been attempting to leave early while Trump was still speaking. At the same time, some of the people seen in the foreground of the video may simply have been positioning themselves to be close to where Trump and his family would later exit the room. We examined raw video that showed the minutes after the completion of the speech. That raw video showed quite a few members of the crowd standing in the same area of the room that was shown in Rubin's video, raising their phones in the air for pictures and videos as the former president greeted people and waved goodbye.

As of the afternoon of Nov. 16, the day after Trump's speech, Rubin's video had already received more than 2 million views.

The video began with four people who could be seen walking from right to left, toward the same doors from which Trump had entered and would later exit. One of the four people then gestured in the direction of the doors. Another man separate from the group of four people was then seen pointing in the direction of the doors with a throat slash gesture, perhaps indicating that the exit was not currently accessible. We were not able to identify these five people.

ABC News chief Washington correspondent Jonathan Karl, a colleague of Rubin's, reported into a camera while Trump was still speaking. In a video of Karl's reporting that was reposted to Twitter, he said, "I actually saw people trying to leave and people leaving early even before he was done. He's still speaking now. And then they, I think perhaps a little concerned that the hall would empty out too much, they actually started preventing people from leaving, so now they're no longer allowing people to leave."

The videos from Rubin and of Karl's reporting were later combined into one clip from The Recount, which bore the title, "POV of Being Stuck at Trump's 2024 Presidential Campaign Launch Speech."

We reached out to both Rubin by email and Karl on Twitter in order to ask questions, but did not receive further details on the matter.

Note: During our research, we found five different videos about Trump's announcement that were published to the ABC News YouTube channel in the nearly 24 hours following the speech. None of the five videos mentioned any further details about people in the crowd purportedly being blocked by security as they attempted to leave early.

Trump's remarks lasted just over one hour and four minutes. According to a transcript of Trump's speech from Rev.com, Rubin's video was recorded around the 38-minute mark of his announcement. At that moment, Trump was overheard saying the words, "Help is on the way," which we cross-referenced with the transcript.

Meanwhile, the video of Karl talking about the crowd was from around six minutes before Trump completed his remarks, with the former president saying the words, "There will be more, much more to come in the months ahead."

As we mentioned at the top of this story, we reviewed raw video from before, during, and after Trump's remarks, including lengthy videos from The Guardian, C-SPAN, and Right Side Broadcasting Network (RSBN). These videos showed that Trump both entered and exited through the doors off to the left from the viewer's perspective, which was stage right. These were the same doors that some of the crowd had purportedly been blocked from using to exit the room.

Again, it's possible that some in the crowd were simply trying to get a good standing position to see and take pictures and videos of Trump and his family as they left the room. At the end of Trump's speech, members of the crowd standing in the same area shown in Rubin's video were seen raising their phones in the air to do that very thing. Still, we take into consideration the fact that both Rubin and Karl were eyewitnesses who said they saw people being prevented from leaving.

We also reached out to Mar-a-Lago to ask if security had blocked people from leaving the building and if there was more than one exit that the crowd was authorized to use that night.

This story will be updated if we receive any further information.

What Trump's 2024 Bid for President Means for Republicans. ABC News via YouTube.com, 2022, https://www.youtube.com/watch?v=C07Kxjev8J4.