Scholar: Inflation Will Likely Stay High Regardless of Which Party Wins the Midterms

Inflation, or a sustained rise in consumer prices, is created in two main ways, explains an economics expert. 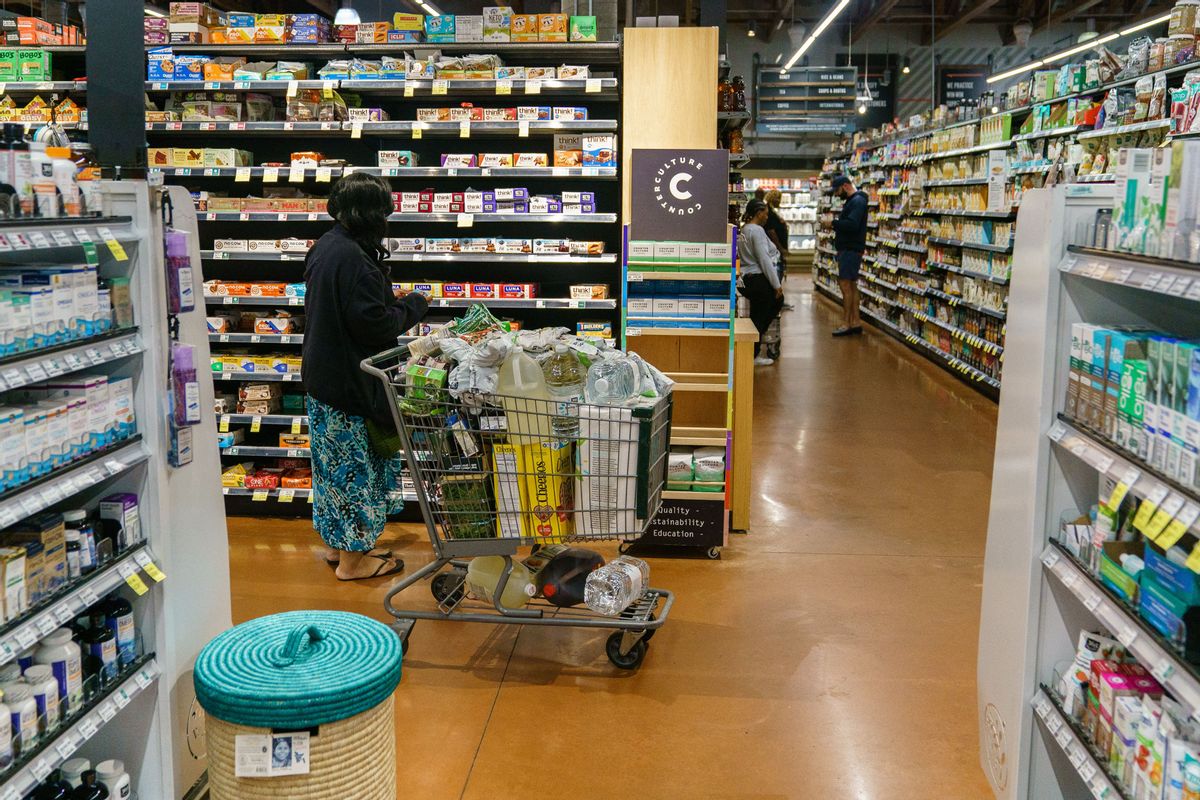 The U.S. government can’t do much about rising food prices, which are primarily caused by supply chain problems. (Image Via Getty Images)

This article by William Chittenden is republished here with permission from The Conversation. This content is shared here because the topic may interest Snopes readers; it does not, however, represent the work of Snopes fact-checkers or editors.

Soaring inflation is the top issue for a lot of voters heading into the midterms, with most saying Republicans would do a better job of handling the problem.

Indeed, Republican candidates are taking full advantage of voter concern about inflation by hammering Democrats on the issue and pushing their own ideas to fight inflation, such as cutting both government spending and taxes.

As a finance and economics expert, I have studied inflation, what causes it and what can bring it down. That's why I doubt a Republican Congress would have much, if any, effect on inflation.

Inflation, or a sustained rise in consumer prices, is created in two main ways.

The first is by way of an increase in demand for products and services. For example, at the beginning of the pandemic, demand for webcams soared, as lots of employees were required to work remotely. As a result, the prices of webcams increased significantly.

Or take leisure travel, which has increased significantly as COVID-19 infections have come down. People are flying more, which has led to higher ticket prices.

When these types of demand-driven price increases occur across a large number of products and services, the result is rising inflation.

For instance, gas prices are on the rise because it has become a lot more expensive to produce it. The war in Ukraine sent oil prices soaring at the beginning of 2022. They've come down, but a recent supply cut by OPEC+ oil-producing nations caused another spike. As oil prices increase, the higher costs are passed on to refiners, which leads to higher prices at the pump.

The increase in the price of eggs is another example of this type of inflation. Bird flu caused the deaths of about 10% of egg-laying hens beginning in January 2022. In addition, farmers faced higher fuel and fertilizer costs. These factors have caused the average price of eggs to soar to an all-time high.

The Fed Can Fight Only Half the Battle

An economy's central bank – not Congress or the president – is typically the first line of defense when it comes to battling inflation. Central banks set monetary policy, and their primary way of combating inflation is by raising interest rates.

In the U.S., the Federal Reserve focuses on the so-called federal funds rate, which is the base rate that banks use in setting their own deposit and loan rates. The Fed has raised this benchmark five times in 2022, from about 0% in March to 3% – and is expected to lift rates another 0.75 percentage point on Nov. 2, 2022.

The impact of higher interest rates is already being felt in the housing market, for example. Current 30-year mortgage rates are over 7% on average, more than double the rates of a year ago and the highest since 2002. This is resulting in fewer home sales and falling prices.

The problem is that this approach has absolutely no effect on the other main generator of inflation, rising production costs.

The Fed's higher rates will not stop the war in Ukraine or prompt hens to lay more eggs. Therefore, energy and egg prices won't drop as a result. This is also true for all products and services whose production costs are increasing because of supply chain issues.

These issues have affected the prices of everything from bicycles to bathroom tissue. Higher interest rates will not affect the demand for and thus the prices for bikes, toilet paper or any other goods feeling supply chain strains. 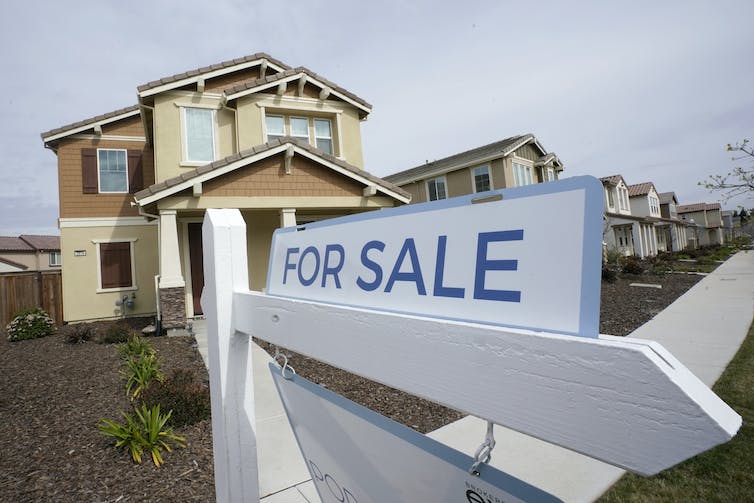 The Fed's interest rate hikes are starting to sap demand for new homes – the one way policymakers can fight inflation. AP Photo/Rich Pedroncelli

Congress and the White House do have some tools they can use in the inflation fight. One problem is they're not very popular and so hard to pass. Another is that, like the Fed's rate hikes, they address only one kind of inflation.

But as with higher rates, it won't do anything to fix the global economy's ongoing supply chain problems or lower production costs. Changes in taxes or government spending will not reduce food prices or the cost of heating your home this winter.

So even while a Republican Congress might want to do more about inflation, whatever it does will affect only one of the drivers. 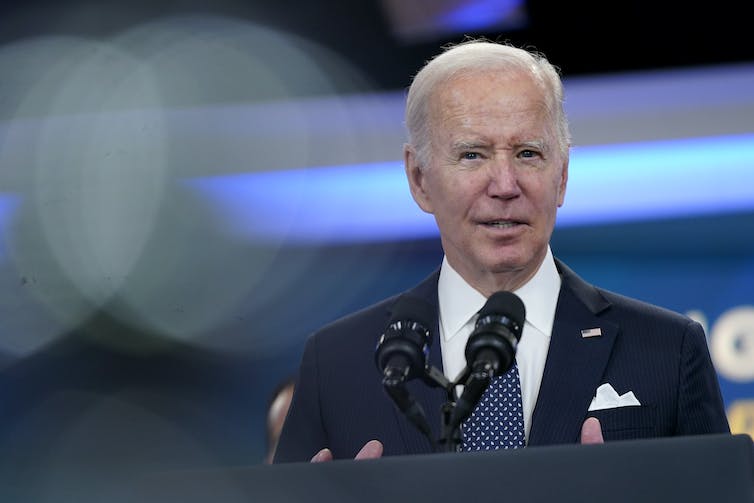 Republicans hope they can pin the blame for inflation on President Biden, though the data shows that which party is in the White House doesn't make that much of a difference to the rate of inflation. AP Photo/Patrick Semansky

Who's Better on Inflation

Taking a step back, does either political party have a better track record on inflation?

The short answer is no, based on my analysis of economic data from 1953 to 2020. From Presidents Dwight D. Eisenhower through Donald Trump, inflation has averaged 3.35% under Democratic administrations and 3.5% under Republicans.

One caveat, however. When the House and Senate are controlled by Republicans while the president is a Democrat, inflation averaged 2 percentage points less than than when everything was in Democratic hands. There are fewer data points, so it's not as strong a finding, but it suggests divided government has an upside.

Another way to look at this is to examine the parties' current or proposed policies. Democrats have touted their "Inflation Reduction Act," a package of climate, health care and tax measures passed in August, as proof that they are tackling the problem. But despite the name, economists expect it to have very little impact on inflation anytime soon, because most of the measures will take years to go into effect.

Republicans, meanwhile, have proposed cutting spending – such as on America's social safety net – and lowering taxes for wealthier individuals and businesses. While spending cuts could reduce demand – and inflation – the lower taxes would work at cross purposes and drive up prices by pumping more money into the economy.

In other words, expect inflation to stay high regardless of which political party is in the majority of the House and Senate. And then, turn to hope – that the Fed's rate hikes work, and the supply chain problems driving up costs begin to ease.