Celebrating Diwali: Who is Lakshmi?

Shri is the earliest name given to the goddess Lakshmi in Hindu texts. The word originally meant splendor and refers to all that is auspicious. 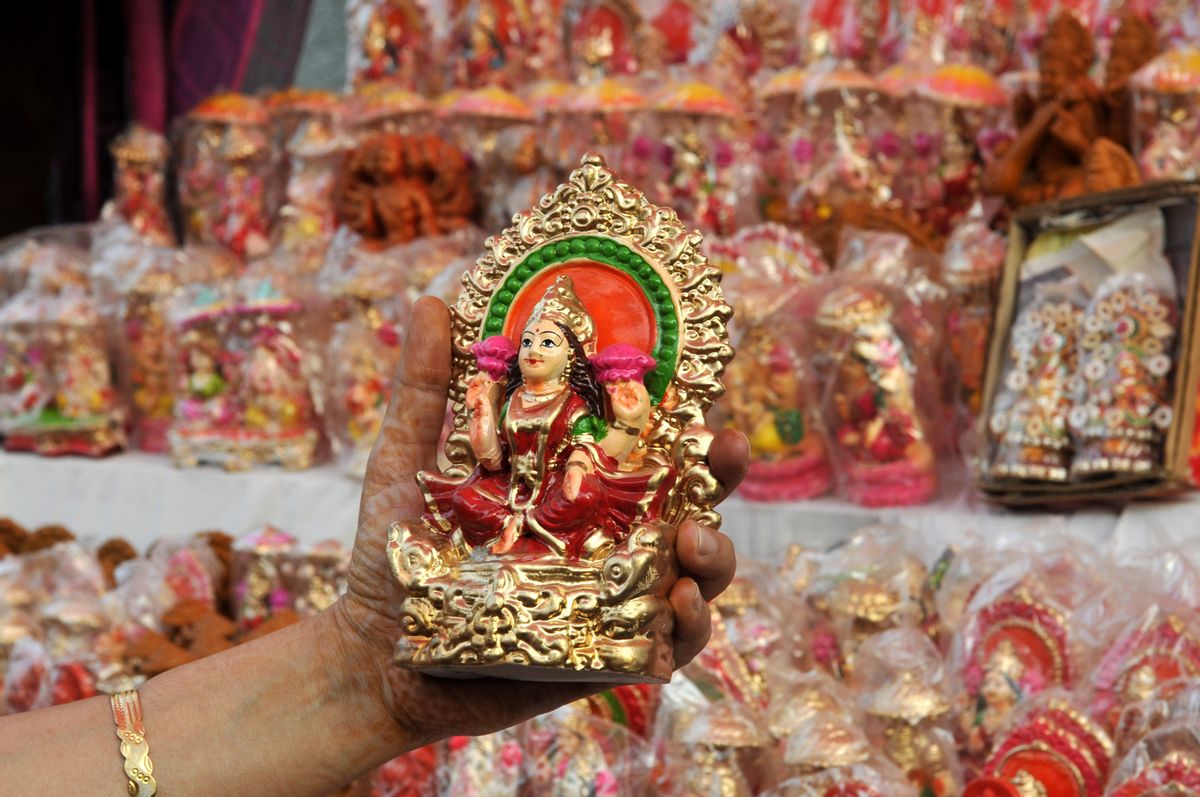 This article by Jeffery D. Long is republished here with permission from The Conversation. This content is shared here because the topic may interest Snopes readers; it does not, however, represent the work of Snopes fact-checkers or editors.

This year Diwali, a popular festival for Hindus, Jains, Buddhists and Sikhs, will be celebrated on Oct. 24, the Amavasya, or new moon day, of the month of Kartik in the traditional Indian lunar calendar.

Devotees across around the world will bring festivities into their homes by lighting earthen lamps called diyas, setting off fireworks, displaying colored electric lights and exchanging gifts. In northern India, this date also marks the beginning of the new year.

The day is specially dedicated to the worship of Lakshmi, the Hindu goddess of prosperity and good fortune.

In modern images, Lakshmi is typically depicted wearing either a red or a green sari. The upper two of her four hands are holding lotus flowers, while her lower right hand is upraised in the “do not be afraid” gesture, or abhaya mudra.

Her lower left hand is pointed downward with her palm facing out and golden coins are falling from it. She sits or stands upon a large red lotus flower. Often, there are two elephants behind her with their trunks upraised. As poet Patricia Monaghan writes, sometimes these elephants “shower her with water from belly-round urns.”

Lakshmi is believed to be the consort of Vishnu, who is the preserver of the cosmic order, or dharma. As Vishnu’s shakti, or power, Lakshmi is his equal and an integral part of his being.

In the Srivaishnava tradition of Hinduism, Lakshmi and Vishnu make up a single deity, known as Lakshmi Narayana. Also known as Shri, Lakshmi is believed to mediate between her human devotees and Vishnu. 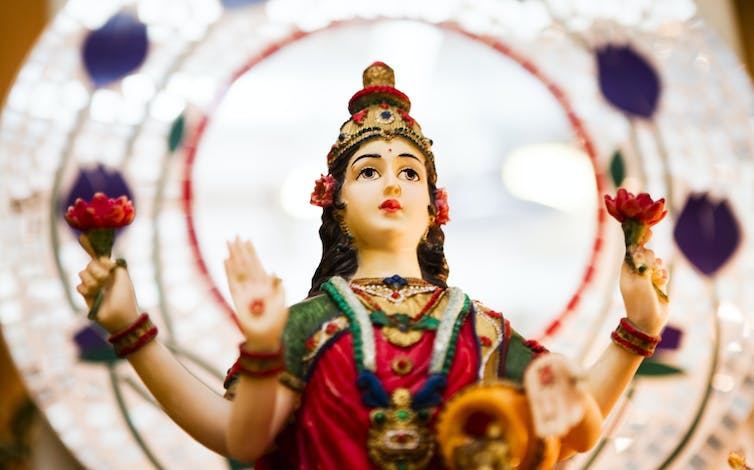 Devotees all over the world pray to the goddess Lakshmi on Diwali. RapidEye/Collection E+ via Getty Images

According to the sources I have studied as a scholar of Hindu, Jain and Buddhist traditions, Shri in fact seems to be the earliest name given to this goddess in Hindu texts. This word originally means splendor and it refers to all that is auspicious: all the good and beautiful things in life. The name Lakshmi, on the other hand, refers to a sign, imprint or manifestation of Shri. These two words seem to refer to two distinct goddesses in the earliest Hindu literature, the Vedas.

By the first century, however, which is the period of the writing of the “Puranas,” or the ancient lore of the Hindu deities, these two deities appear to have merged into a single goddess, known as Shri, Lakshmi or Shri Lakshmi.

There are many stories of Lakshmi’s origins. In the most popular of these, from the fifth century Vishnu Purana, she emerges from the ocean when the Devas and Asuras, the gods and the anti-gods, churn it to acquire amrita, the elixir of immortality. In another source – the Garuda Purana, a ninth-century text – she is said to be the daughter of the Vedic sage Bhrigu and his wife, Khyati.

Those who wish for prosperity in the new year say special prayers to Lakshmi and light diyas in their homes so the goddess will visit and bless them.

Jeffery D. Long is Professor of Religion and Asian Studies at Elizabethtown College.